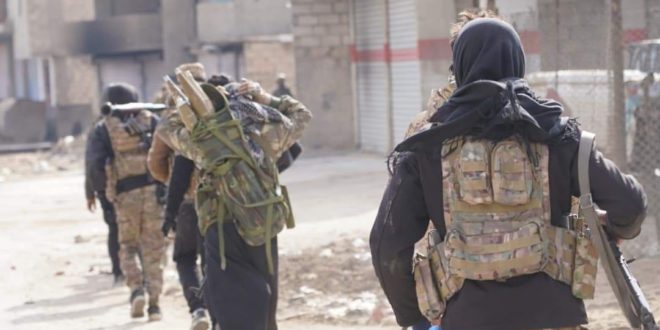 SDF reporting: forces continue to sweep the prison and the surrounding area. Locating those who attacked and continued to try and support the #Daesh operation inside the #alHassaka prison. During the battle, 8 Daesh were killed while one member of the SDF lost his life.

During the night the #SDF gave #Daesh the opportunity to surrender. At 5am, following the deadline, our forces stormed a building. 300 individuals surrendered. The operation went as planned. Executing the plan with accuracy and with precision.

In the sweeping campaign that our forces lead in #Alzohor neighbourhood . 5 terrorists of those who were willing to back and support terrorists in #Sina‘a prison were killed. They’re wearing explosive-belt.

In #Ghweran eastern neighbourhood our forces led clearing operations, armed clashes took place during the raid. The clashes caused the kill of 9 of them, 2 were suicide bombers.

Our #SDF and #ISF, managed to set 9 prison employees free, as they were taken as hostages since the first the of mutiny. in a very accurate military operation happened in first hour of Yesterday’s night. The employees were transferred to safer point.

Int_Coalition targeted the perimeter of #Sina‘a prison with very accurate hits by air strikes and #Bradley‘s, #SDF also hit the buildings that #Daesh used as shelters.

A number of #Daesh prisoners in #alHassaka prison are being rounded-up continually and professionally by our forces. The #SDF will transfer these individuals to a new facility and ensure their and it’s security.

Previous Iraq Veteran Gabbard on AG: “You are an enemy of the state if you are against the president or his policies”
Next Austin Places 8,500 Troops on Heightened Readiness, NATO sends troops, jets