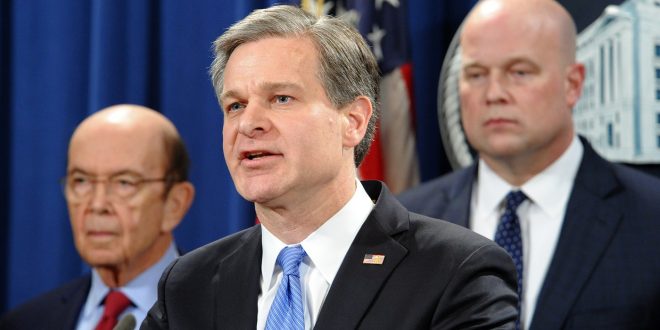 FBI Director Christopher Wray, standing with Commerce Secretary Wilbur Ross (left) and Acting Attorney General Matthew Whitaker, remarks on the charges against Huawei during a press conference today at the Department of Justice in Washington, D.C.

At today’s Senate Judiciary Committee hearing on the FBI’s handling of the Larry Nassar case, FBI Director Christopher Wray apologized for the agency’s failure to protect women and girls from Larry Nassar.

Dear Sir. that is a start, now how about all of the mass murderers under the FBI radar that were ignored (ie Boulder killer of 10) while the FBI chased Pelosi’s witch hunt. We do respect the FBI for admitting 6 January was not a plot or insurrections. Time for a reshuffle, however, as all FBI agents, many dedicated, have been sold down the river with political corruption by the Chiefs.