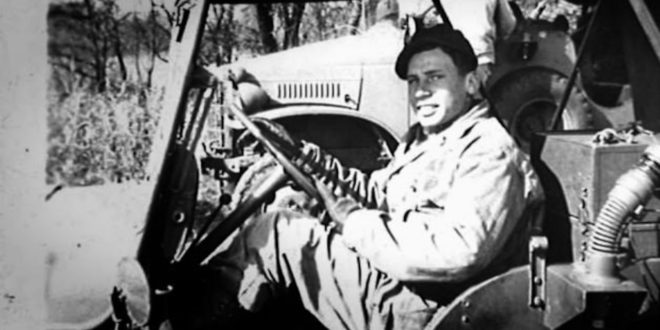 Actor, comedian, composer and filmmaker Mel Brooks was born Melvin James Kaminsky in 1926. He grew up in Brooklyn, New York.

In 1944, he was drafted into the Army. Due to his high scores on his military entrance exam, Brooks was placed in the Army Specialized Training Program at Virginia Military Institute, where he learned combat engineering and other fighting skills.

Twelve weeks later, he was sent to basic training at Fort Sill, Oklahoma.

In November 1944, he arrived in France and then Belgium, serving as a forward artillery observer with the 78th Infantry Division.

A short time later, he was transferred to the 1104th Engineer Combat Group, participating in the Battle of the Bulge. He was sent to the forward edge of the battle areas, helping to clear German land mines so Allied forces could advance. On five occasions, Brooks’ unit had to fight as infantry and suffered casualties doing so.

In Germany, the unit was the first to construct a bridge over the Roer River, and they would later build bridges over the Rhine River.

By April 1945, Brooks’ unit was conducting reconnaissance missions in the Harz Mountains of northern Germany. Days later, the war ended.

In May 1945, Brooks recalled seeing starving Jewish refugees who had escaped the concentration camps. Brooks said this left an indelible impression on him as he is Jewish. He said he felt lucky to be an American.

A short time later, Brooks was honorably discharged from the Army as a corporal.

His entertainment career took off in 1949, when he was hired by his friend Sid Caesar to write jokes for the DuMont NBC TV series “The Admiral Broadway Revue.”

Brooks is one of the few people who have received an Oscar, an Emmy, a Tony and a Grammy.

On Dec. 5, 2009, Brooks was a recipient of the 2009 Kennedy Center Honors at the John F. Kennedy Center for the Performing Arts in Washington, DC. He was also inducted into the Hollywood Walk of Fame on April 23, 2010.