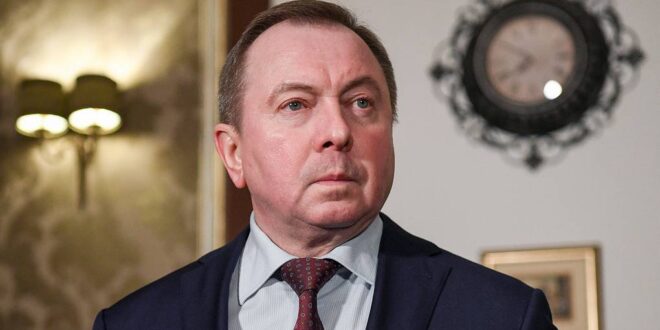 Shortly before Russia invaded Ukraine, Makei promised that there would be no attack on Ukraine from the territory of Belarus.

In June, rocket attacks against Ukraine were reported to be launched from Belarusian airspace, just hours before Russian President Vladimir Putin was scheduled to meet with Belarusian President Aleksandr Lukashenko in St. Petersburg, Russia.

Makei attended a conference of the Collective Security Treaty Organization (CSTO) – a military alliance of post-Soviet states – in Yerevan earlier this week, and was scheduled to meet his Russian counterpart, Lavrov, on Monday.

Russia’s state-sponsored news agency, TASS, reported the announcement, adding that it has “no official confirmation of this information yet.”

“We are shocked by the reports of the death of the Head of the Ministry of Foreign Affairs of the Republic of Belarus Vladimir Makei,” Russian foreign ministry spokeswoman Maria Zakharova posted in her Telegram channel. “Official condolences will be published soon.”

Vladimir Makei was born in the Grodno Region on Aug. 5, 1958. He graduated from the Minsk State Pedagogical Institute of Foreign Languages, according to TASS. He worked at the Council of Europe, and headed the European Cooperation Department of the Foreign Ministry. In 2000-2008 he was an aide to the Belarusian president. He was appointed foreign minister in August 2012.