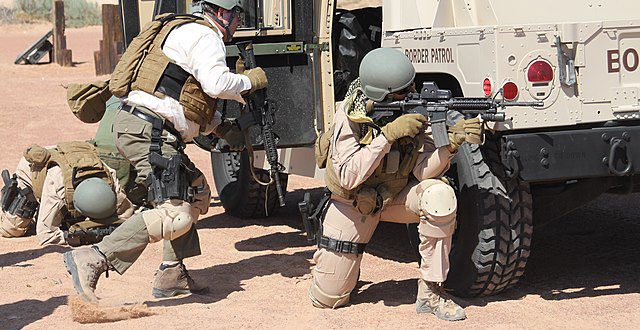 Uvalde, Texas – Agents from the U.S. Border Patrol placed themselves between the killer and his young targets who were trapped during the rampage Tuesday inside Robb Elementary School in this small Texas town.

“Risking their own lives, these agents and other officers put themselves between the shooter and children, to draw the shooter’s attention away from potential victims and save lives,” said USBP chief Raul Ortiz. “At least one agent was wounded by the shooter during the exchange of gunfire.”

“They are front line, tactical operators,” one LEO source said. “They are made of courage.”

One of the wounded agents exchanged gunfire with the killer, who wore a protective vest without armored plates. The agent fired the shot that stopped the deadly assault on a room full of young children and their teachers.

The rampage unfolded on Tuesday morning after the alleged killer fled the home where he had shot his own grandmother, police said.

Salvador Ramos argued with his grandmother, shot her, and stole her car, police said. He drove toward the school, and crashed in a ditch. From there, he went inside the school, and into a fourth grade classroom.

A spokesman for the Texas Department of Public Safety described the sequence during an appearance on CNN.

“The shooter was able to make entry into a classroom, barricaded himself inside that classroom, and again just began shooting numerous children and teachers that were in that classroom, having no regard for human life,”  said Lt. Christopher Olivarez.

Ramos opened fire inside the classroom.

“Just began shooting anyone that was in his way,” Olivarez said.”

Law enforcement officers quickly arrived on the scene. The group included officers from local and federal units, plus state troopers.

The Border Patrol was among them.

“On-and-off duty agents arrived on the scene to assist with transferring students safely to their families and to provide medical support,” Ortiz said.

Some officers broke windows in order to help students and teachers escape the carnage. Others went inside.

“There was no question we would do this,” one USBP agent told Soldier of Fortune. “We had to act fast.”

The BORTAC is headquartered in El Paso, Texas, and can operate on short notice in crises around the world.  The unit was created in 1984, to serve a civil disturbance function in response to rioting at legacy Immigration and Naturalization Service detention facilities, according to the BP. It quickly acquired additional skill sets including high-risk warrant service; intelligence, reconnaissance and surveillance; airmobile and maritime operations; and other areas.

Just 50 miles from the U.S.-Mexico border, Uvalde is home to many USBP agents. They raise their families here. Some of their children are enrolled at Robb Elementary School.

Previous Explosives Expert Who Staked Out Times Square, Other New York Landmarks, Previously Planted Bomb in Israel
Next Russian Garrisons Near Finnish Border Are Empty; ‘They Don’t Have Anything,’ Intelligence Official Says