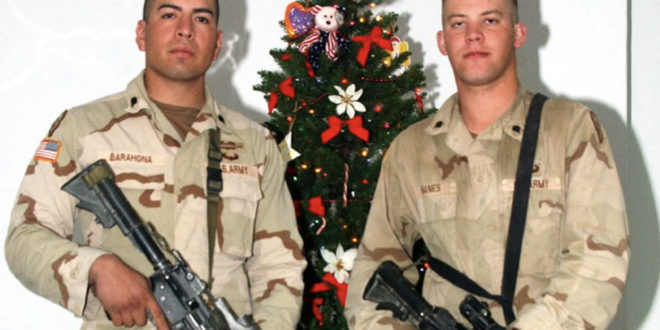 Christmas in the Field -Iraq / Afghanistan

Christmas in the Field – Through the Years
Iraq / Afghanistan (2004)

The service, led by Army Chaplain Col. Jim Krische gave deployed service members an opportunity to fellowship and celebrate the holiday with their brothers and sisters in arms.

Soldiers assigned to the 2nd Battalion, 7th Cavalry Regiment, 4th Advise and Assist Brigade, 1st Cavalry Division, enjoyed Christmas together, even in northern Iraq. Decorations transformed a room, instantly adding a Christmas feel to the meal they would soon partake in.

“I don’t mind spending Christmas here,” said Capt. Ramon Neal, an intelligence officer assigned to Headquarters and Headquarters Company. “Everyone has to share each moment to be a Family and here everyone takes care of each other. Being here, you appreciate the small things in life,” said the native of Hampton, Va.

The cooks labored all day to prepare a holiday meal so everyone could have the chance to sit together as a family and have a feeling of home. Joined by their uniforms with the insignia “U.S. Army”, these Soldiers didn’t let being away from home get them down.

“It can be difficult, but this is where I’m needed and I’m really inspired to be here,” said Neal, a first-time deployer. “It takes the feeling of being away from home away to know you’re not doing it alone.”

Many Soldiers wore Santa hats. They enjoyed Christmas music together, some singing along to familiar tunes. For some, this was their first deployment but for others being away from their Family has become a repeated occurrence. Despite the difference in the number of “separated Christmases” the Soldiers made the most of the day with each other.

“It’s nice to have good friends to at least spend Christmas with,” said Spc. Daniel Grondin, a medic assigned to HHC.

Currently on his fourth deployment, Grondin kept a smile on his face although he was away from his wife, whom he’s been married to for 20 years.

“You have to do what is necessary,” said the Berlin, N.H., native. “I’m going to chat with my wife then I’m going to work out. This is my Christmas.”

Previous Marines’ New Rapid Response Force
Next Biden to Governors’ Resistance Movement: Look, there is no federal solution. This gets solved at a state level