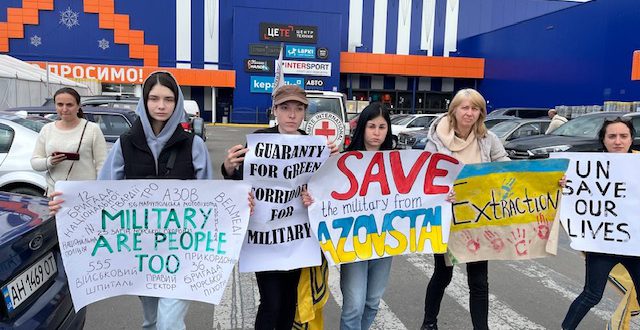 May 3 in Zaporizhzhia. Photo by Owen Thorne

Bus loads of civilians arrived in Zaporizhzhia today after being evacuated from the besieged Azovstal steel plant in Mariupol, where a new wave of Russian attacks have been reported.

The civilians traveled in a convoy for more than 24 hours, crossing out of Donbas through Russian lines while headed for territory controlled by Ukraine.

The convoy was conducted by the International Committee of the Red Cross, ferrying women, children, and the elderly.

One of the evacuated civilians, Alina Kozitskaya, told Reuters she had spent weeks sheltering in a basement.

As the convoy arrived in Zaporizhzhia, reports emerged that Russia had launched a fresh wave of artillery and other attacks on the steel plant.

Only civlians have been able to leave the steel plant, according to Ukrainian Foreign Minister Dmytro Kuleba. Officials in Kyiv have been negotiating to secure the release of Ukrainian soldiers who remain inside the facility.

Supporters in  Zaporizhzhia demonstrated to call attention to the soldiers, carrying signs in English.

“Military are people too,” read one sign. “Save the military from Azovstal,” read another. The protesters asked for extraction and a green corridor of safety for the military, and called on the United Nations to save lives.