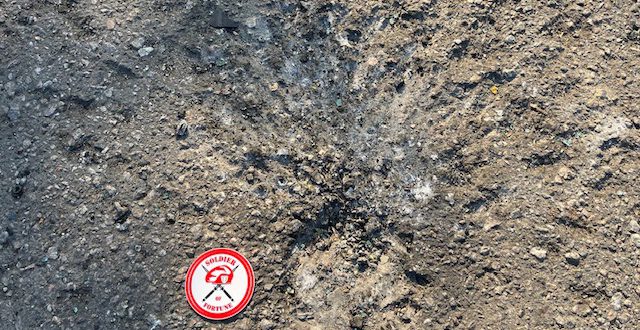 SOF is making an impact - including on Twitter. Photo by Owen Thorne.

Cluster Bombs and the Weight of Artillery: a Report From the Frontline in Donbas

SLOVYANSK, UKRAINE – Slovyansk has now become the frontline, essentially, of the Russian offensive in the Donbas. The Russians have focused their main effort here in the Donbas over the past two months. They’re slowly pushing the Ukrainian forces back. They’re using the weight of artillery, and 100,000 reinforcements to push back the Ukrainian line.

Ukrainians are fighting along the salient. Where we’re standing now is in the north corner of that salient, but the Russians are slowly cutting it off. They occupied Sievierodonetsk last week, about 20 miles to the east of the end of the salient. And now they’re encircling the city of Lysychansk . They’re pushing from this location right here, to the north. They’re pushing to the south to cut off even more. And again, every night we hear artillery.

We’re here in Slovyansk. It’s the fourth month of the war. In the videos published here, you can see the results of Russian cluster bombing. This is all in the residential area, and there is more damage to the apartment building immediately next to the first building. Four people were killed within this complex inside the town, just about two miles behind the Russian line.

Also we can see the lethality zone. As you see in the second video (below), shrapnel is impacted on the railing around where the munition hit. And again, this is right in the middle of a residential area. Just over the railing is a second impact which you can’t see just beyond these bushes. Another 15 meters or so is a third, and then another 15 meters, a fourth impact. That gives you an idea of the spread and lethality of these cluster bomb initiatives.

Just a couple of nights ago I heard the largest artillery concentration and barrage fire for a sustained amount of time that I can recall since Korea from a historical perspective, three hours of artillery fire, starting out with battalion salvos and artillery groups, and then an hour of sustained artillery with hundreds if not 1000s of rounds firing over a three hour period. This included high explosive followed by airburst white phosphorus.

Just north of here, Izium is where that took place. And within 48 hours, Russia has occupied that area.

To show the scale of the impact of the cluster munitions, I placed an SOF sticker alongside two of these sites. Each sticker measures slightly less than 3 inches in diameter.

The head of the town’s military administration commented Thursday on one of the strikes.

Owen Thorne is Chief Correspondent at Soldier of Fortune. He is a multi-tour combat veteran.