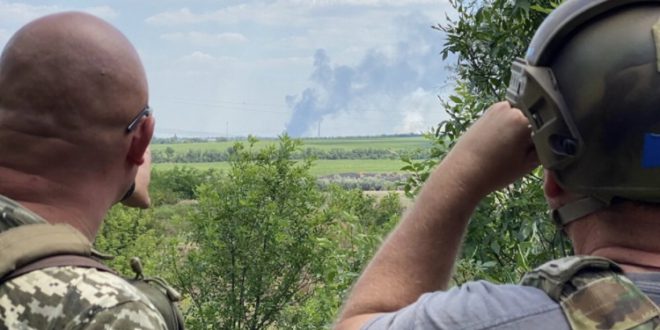 As evening comes on July 4th here in the Donbas, the Russians have taken an operational pause.

Their commanders think they have earned it. In spite of the early disastrous setbacks in places like Kyiv and Karkiv, Phase II here in the east has seen the Russian Army do what it does best. Fix the Ukrainians in position with superior numbers, and employ sustained and massed artillery fires. MMA fighters call it “ground and pound.”

In the octagon, it’s especially effective if you outweigh an opponent, pin him against the fence, lean as much of your weight on him as possible and throw a steady stream of fists and elbows. This is a great simile for what the Russians are doing here. The Ukranians are pinned by the terrain and the fact that the Donbas forms a salient toward the east with Russians given positional advantage to the north and south.

After the debacle at Kyiv, the Russians shifted their focus and made the east the main effort, throwing in the preponderance of their firepower and over 100,00 reinforcements.

This allowed them to capture the key town of Izyum as earlier reported, but paved the way for the capture of Sievierdonetsk at the eastern tip of the Donbas salient earlier this week. The fall of this city allowed the encirclement of its neighbor Lysychantsk which also fell just a few days ago.

Now the Russians have pushed west to Seversk, and continue to press south from Izyum toward Slovyansk, just a few miles north of the next major city, Kramatorsk. The pressure also remains on in the southern half of the salient as the city of Bahmud, with a key road junction, remains under heavy artillery fire and airstrikes.

While U.S. and western equipment and weapons continue to slowly flow in, the next few weeks will be critical and possibly decisive as it remains to be seen how much the red steam roller has left in it, and if this will satisfy Putin’s war aims.

Previous Cluster Bombs and the Weight of Artillery: a Report From the Frontline in Donbas
Next Four Army Veterans Awarded Medal of Honor for Actions in Vietnam War