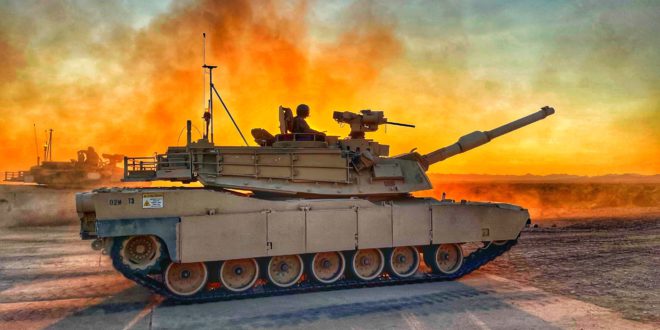 Two crews from Crazy Horse Company, 1st Battalion, 8th Infantry Regiment, 3rd Armored Brigade Combat Team, 4th Infantry Division made armor history in September at Yuma Proving Ground, Arizona. Led by 2nd Lt. Jake Hall and Staff Sgt. Nicholas Smearman, the crews were the first to fire the XM-1147 Advanced Multi-Purpose (AMP) round, an experimental round that has been in development for over a decade.

The intent is to replace four 120mm rounds currently in use: the M830A1 Multi-Purpose Anti-Tank (MPAT), the M830 High Explosive Anti-Tank (HEAT), the M1028 canister (CAN) round, and the M908 obstacle reducing (OR) round. During testing, the crews fired 86 service rounds, testing the AMP’s capabilities under multiple scenarios and against various intended targets.

“Being able to see the effects that this round was able to have downrange, engaging a multitude of targets, bunkers, walls, troop targets, armored vehicles, it’s a very functional round; instead of having five different rounds, it brings it down to two,” Hall said.

The AMP round had spent over fifteen years in development before the testing began, and the crews were well aware of the historical impact the tests would have for the Army and the Armor branch as a whole.

Currently, the U.S. Army utilizes five 120mm service rounds, each with a unique purpose and intended target. The M830 HEAT and M830A1 MPAT rounds are primarily designed for light armor targets and, in the case of the MPAT, aerial targets. The M1028 CAN round is intended to engage troop targets over the max effective range of the mounted machine guns, and the OR is designed for obstacle reduction. The AMP encompasses all four of these rounds, with additional capabilities such as breaching reinforced walls. For tank crews, this versatility serves a vital purpose in addressing the ‘Battle-Carry Dilemma’ and giving two invaluable resources: time and space.

“What this round has done is it’s going to make tactical planning in an operational environment a lot easier. The term that we use is ‘Battle-Carry,’ what round we have in the breach when we enter combat, usually that’s going to be decided by what we expect the enemy to be throwing at us if we’re expecting tanks, we’re going to battle carry SABOT, our tank defeating round,” Smearman explained. “[The AMP] allows us to battle-carry that round without fear of running into a different enemy.”

While the AMP remains in development, the Iron Brigade has steadily upgraded its M1A2 Abrams fleet, with tank crews spending many long nights and early mornings sending their platforms to receive the material and software upgrades required to utilize it. For the crews of Crazy Horse, that day can’t come soon enough.

“One of the questions they asked us during the focus group was ‘would we feel confident taking this round into an operational environment?” And it was a resounding ‘yes’ from all of us,” Smearman said. “I’d take it to hell and back.”

Previous MAJOR LOUIS CUKELA, USMC Received both the Army and Navy MOHs
Next Yitzhak Rabin: The Assassination that shook the world