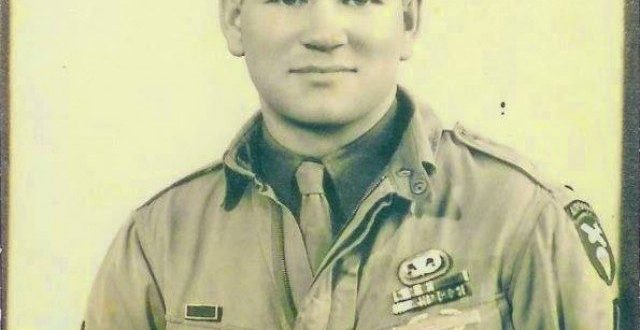 D-Day at Normandy: ‘Rock’ Was Lost in Skies Over France

During World War II, Kenneth “Rock” Merritt was aboard a plane that got lost over France. Here are his memories of his experiences in the Army from 1942-45. His words are as follows.

I was sworn into the Army on October 15, 1942 at Fort Sill, OK and volunteered for airborne training. I was sent to Camp Blanding, Fl. I was assigned to the 508th Parachute Infantry Regiment (508th PIR).

The 508th PIR was activated October 20, 1942. At that time, it had only enough officers and enlisted men to activate the Headquarters & Headquarters Company, a Service Company, and the First Battalion. During the activation ceremon y, we recruits stood in the back of the formation.

However, a few days later, we were up front for arduous basic infantry and pre- airborne school physical training.

In February 1943, we moved to the Parachute School at Fort Benning, GA. Three weeks later I proudly pinned on my wings, I was a qualified parachutist.

After a few days furlough, my first days off since October 1942, the regiment moved to Camp Mackall, NC for advanced infantry and airborne operations training. We participated in parachute operations and in largescale maneuvers in South Carolina and Tennessee. We also mastered the art of “beautification of the area” – picking up debris, cutting weeds, painting rocks, etc., skills we often used in Europe “beautifying” our tent camps in England and France.

After the Tennessee maneuvers and a short pass, the regiment packed up and moved to Camp Shanks, New York for overseas processing. On December 28, 1943, we sailed from New York aboard the USAT James Parker — bound for Belfast, Ireland.

In Ireland, we trained for a few weeks, and then moved by boat and train to England. We were lucky; the regiment occupied a tent camp only a short walk from the city of Nottingham.

After about 17 weeks of vigorous unit training, night parachute jumps and field exercises, we packed our equipment and moved to an airfield, and prepared for combat somewhere on the continent.

As a Corporal, LMG Squad Leader, I supervised my squad’s preparations. Our light machinegun and ammun ition was rolled into equipment bundles and parachutes were attached to them. These valuable bundles were dropped from pararacks under our C-47s, or pushed out the door as we jumped.

On June 5, we had a steak dinner and were watching a movie in the hangar, when we were told to fall out, and blacken our faces – – we were on our way!

We had a quick sand table briefing, said ‘farewell and good luck’ to our comrades, put on our gear and parachutes and marched to our designated airplanes.

Our planes had three large white stripes painted around each wing and the fuselage. Our officers had a 3” white vertical stripe painted on the back of their helmets. and the noncom’s helmets had a horizontal white stripe.

Just before we boarded the aircraft, we were told our destination was Normandy, France, and each noncommissioned officer was issued a silk map of France; and everyone was given 5 – 10 dollars worth of francs.”

Each battalion was divided across 40 planes with radar in only the lead plane. As Merritt’s plane approached Normandy’s beaches, the lead plane banked to avoid enemy fire losing the 39 planes following it.

“My jumpmaster went up to see the pilot, and the pilot said ‘I’m lost. I can’t find your drop zone,’” Merritt said. “(My jumpmaster) said, ‘Are you over France? … I’m going back to the door. When I get back, give me the green light and we’re going to jump.’ Well, we did jump.”

“On September 17, 1944 we parachuted into Holland. I was the Hq1 Light Machinegun Platoon Sergeant.

After weeks of fighting in Holland, we marched 22 miles carrying all of our equipment to Oss, Holland where we met trucks that moved us to Sissonne, France. Sissonne was great. We were billeted in an old French artillery post with warm dry beds and hot food.

Following a few weeks training replacements, we were alerted to prepare for a quick move to Belgium. The Germans had launched a surprise attack of 12 divisions (infantry and armored) through the lightly defended Ardennes.

In the morning of December 18, 1944, the 508th PIR loaded into large open trucks and headed for Werbomont, a small Belgian village located at the junction of the two main roads. A long cold ride with cold rations and very short rest stops.

In Belgium, we marched and maneuvered for several days while planners tried to find the best defensive positions from which to stop and destroy the rapidly moving German forces.

By late December 23, 1944, the 508th PIR was deployed in an eight-mile salient, stretching, from the main battle position to Vielsam.

The 508th PIR’s mission was to provide a corridor to safety for the severely mauled and desperate survivors of the overrun infantry divisions and the hard- pressed 7th Armored Division.

The nose of the 508th PIR salient rested upon the Salm River Bridge at Vielsalm. Our First Battalion, supported by my machineguns manned the tip of the salient.

By dawn of December 24, hundreds of vehicles (tanks, armored cars, command vehicles, jeeps) and desperate men fleeing destruction or capture by the Germans had transited the 508th PIR corridor to safety.

In the afternoon, a US fighter a P-47 dropped a bomb on our position and buried our assistant platoon leader. We managed to dig him out and get him evacuated. Concurrently the two Hq1 81mm Mortar Platoon forward observers were wounded and evacuated.

The 508th PIR’s position was becoming increasingly perilous. It was vulnerable to being cutoff and destroyed by fast moving German armored forces supported with infantry.

Late in the afternoon of December 24, the 508th PIR was ordered to withdraw to the main battle position. One platoon per Rifle Company would stay behind to provide a covering force.

On Christmas morning, the 508th PIR was fully committed to developing a strong defensive position. For the next several days, we fought off strong German attacks.

Morale improved on January 7, 1945 as the 508th PIR went on the offen sive. In a bloody and costly assault, the Their-du-Mont Ridge, overlooking the Salm River was captured. Thereafter, the 508th PIR fought through the heavily defended Siegfried Line, and the cold and deep snow of the densely forested Ardennes, all the way to the Roer River, and the end of combat for the regiment.

I missed the end of the Third Reich. On January 10, 1945, I was selected for a tenday furlough in the United States, and missed the terrible months Hq1 men and my platoon fought through the bitter cold, heavy snow, and the Siegfried Line.

On June 20, 1945, I returned to Hq1 in Heddernheim, Germany and resumed my position as the Light Machinegun Platoon Sergeant.

I served 35 years in the United States Army; and, during that time I served in many different units – the 508th PIR was absolutely the finest. It had the best officers, the best noncommissioned officers, and the finest men with whom I have ever served. ”

Previous Soldiers of Misfortune, Captured in Brazil: Escape, Evasion, and Hiding Out in a Bordello
Next Donetsk Breakaway Leader Confirms Russian General Killed in Ukraine, Frames Death as By-Product of “Invincible” Warfighting