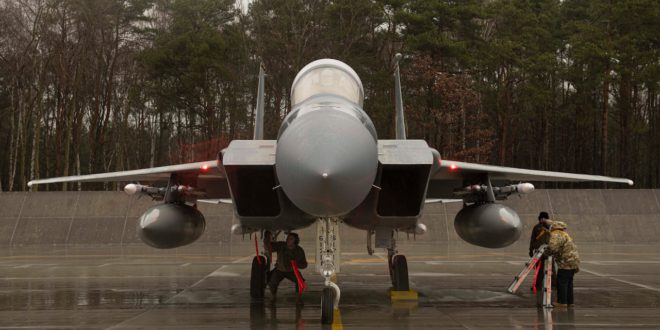 An U.S. F-15C Eagle sits ready to perform NATO enhanced air policing at Lask Air Base, Poland, Feb. 11, 2022. During enhanced air policing, jets and aircrew are ready to respond to any airborne threat at a moment’s notice, ensuring the mutual protection of the U.S. and allied interests. Photo By: Air Force Tech. Sgt. Jacob Albers

Department of Defense Statement on Additional Military Assistance for Ukraine

And, as I have said before, the U.S. is not supporting Ukraine alone. Many other countries are contributing to Ukraine’s ability to defend itself from this unprovoked Russian aggression. We, along with our Allies and partners, are standing together to continue to expedite security assistance to Ukraine, and are employing all available security cooperation tools in support of the Ukrainian people as they defend themselves against this aggression.

The Resistance according to DOD:

Russian Offensive towards Kyiv, we assess is going slower than the Russians had anticipated it going. They’re meeting more resistance than they expected, but I don’t — I can’t give you an exact geographic location of where they are, but they are not moving on Kyiv as fast as what we believe they anticipated they would be able to do. That said, they continue to try to move on Kyiv.

In the Kharkiv area, that second line of advance that we talked about yesterday, we assess that that continues to be contested; still fighting going on there. No additional airborne drops to speak to over the last 24 hours, but that area is still being fought over.

Then the third line of axis that we talked about was from the south towards Kherson on the river. We do assess that they are — that they continue to move in that direction, but we also think, based on what we’re seeing, that in addition to moving from Crimea on an axis towards the northwest, towards Kherson, that they are also splitting off some forces to go to the northeast, sort of in the direction of Mariupol and the Donbas region. So if there’s a change from yesterday, it’s that on the southern axis, they seem to be now wanting to move in two northern directions, northwest and northeast.

We — there is a water plant and a dam north — or upriver from — from Kherson, I apologize if I get the pronunciation wrong, but Kakhovka — hydroelectric power plant. It’s K-A-K-H-O-V-K-A. It’s a dam and a hydroelectric power plant that sits on the river and controls a lot of electrical power to Crimea and southern Ukraine. And we have indications that there — that that power plant and that dam are being contested right now. We have indications that there have been Russian cyber attacks against that power plant, and even the physical presence of some Russian forces there. I do not know what the status is. I don’t know how — what — I can’t tell you whether it’s been captured yet or not, or what the status is. We just — I’m just giving you what the indications are that we have.

We also have indications now that an amphibious assault is underway to the west, on the Sea of Azov, to the west of Mariupol. And the indications are right now that the — that they are putting potentially thousands of naval infantry ashore there. You know, we can’t say with perfect prediction what they’re going to do in terms of where they’re going to go, but I think the general assumption is that they will move again towards — towards the northeast, towards Mariupol and the Donbas region.

We also assessed over the last 24 hours that in general — and I just talked about the three lines of effort — that in general, the Russians have lost a little bit of their momentum. They are not advancing as far or as fast as we believe they expected that they would do that. A good indicator of that is no population centers have been taken, none.

We also assessed that Russia has yet to achieve air superiority over Ukraine. Ukrainian air missile defense systems are still working. Though they were degraded by strikes, they still have air missile defense capability, including aircraft, not just missile defense, but they also have aircraft in the air that continue to engage and deny air access to Russian aircraft.

We do continue to observe missile launches, so we’re meeting here at 10:38 in the morning, and what I can tell you now is that we have observed more than 200 total — not 200 since last time we talked — 200 total launches as of this morning. Again, it’s a mix of ballistic missiles and cruise missiles. Some of these missiles we have assessed have impacted civilian residential areas. I cannot tell you at this time what the casualties are, and I cannot tell you at this time whether those civilian residential areas were deliberately targeted. All I can tell you is we have seen that they have been impacted by some of these missiles.