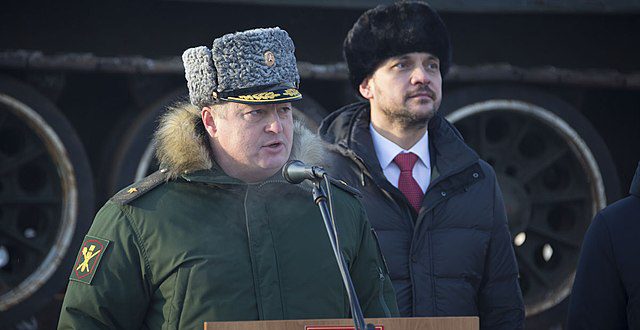 The leader of pro-Moscow separatists in Donetsk verified that another Russian military commander was killed in combat against Ukrainian troops, and implied also that such deaths are a by-product of “invincible” Russian warfighting.

“Soldiers followed him,” Pushilin wrote in Russian. “He saved their lives, but he did not save his own.”

In what may have been a reference to funeral services, Pushilin added, “today we say goodbye to him.”

The death of Kutuzov comes amid reports on social media that another senior officer, Lt Gen Roman Berdnikov, also was killed while fighting in Ukraine.

The similarities in the two generals’ names and positions – both have commanded Russia’s 20th Combined Arms Army – may have prompted erroneous reports that both were killed. The overall tally of senior officers killed in Ukraine, though, remains high.

Moscow has confirmed the deaths of four generals, including Maj. Gen. Andrey Sukhovetsky, while the New York Times has reported that as many as 12 were killed since Feb. 24 in Ukraine.

Western observers have said that the deaths signify problems among Russian forces in Ukraine. The generals are forward-deployed in order to push forward a stalled invasion, or to motivate reluctant soldiers, observers have noted.

“The Russian army has poor discipline and low morale,” one NATO-affiliated military official told Soldier of Fortune. “This is why you see them on the front lines, or near them, which is unheard of in modern Western militaries.”

According to Pushilin, the generals are part of a powerful Russian dynamic.

“As long as our generals are fighting shoulder to shoulder with soldiers, our country and our people are invincible,” he wrote, adding: “He showed by personal example how to serve the Motherland.”

A court in the exclave of Kaliningrad has ordered Russian online media outlets to remove lists of Russian servicemen killed in Ukraine, ruling that “revealing the number of military losses during a war or special military operation in a peaceful period” is akin to revealing military secrets.

Moscow said in late March that the death toll was 1,351 in Ukraine. Kyiv places the number closer to 30,000 killed and wounded.

Previous D-Day at Normandy: ‘Rock’ Was Lost in Skies Over France
Next Moscow-Backed Rebels Sentence British and Moroccan Men to Death in Donetsk