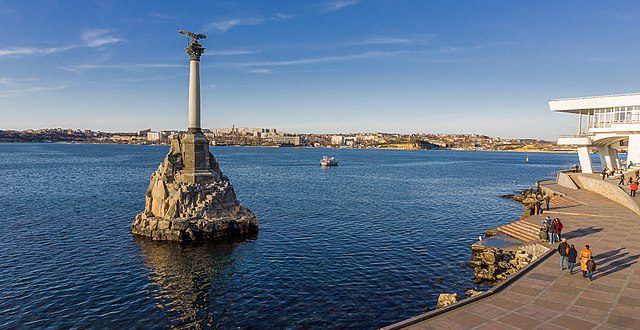 Monument to the Sunken Ships, in Sevastopol

A small explosive device carried by a makeshift drone hit the headquarters of Russia’s Black Sea fleet on the Crimean Peninsula on Sunday, wounding six people, local authorities said, while Ukraine said a Russian missile attack killed one of its richest people, a grain merchant.

There was no immediate claim of responsibility for the drone attack in the port city of Sevastopol, which forced cancellation of ceremonies on Russia’s Navy Day holiday. But the seemingly improvised, small-scale nature of the attack raised the possibility it was the work of Ukrainian insurgents in the territory seized by Russia in 2014, the Associated Press reported.

The drone appeared to be homemade and the explosive device low-powered, the Black Sea Fleet’s press service said. Sevastopol is about 170 kilometers from the Ukrainian mainland, but it is unclear where the drone began its flight.

In light of the attack, an adviser to Ukraine President Volodymyr Zelenskyy mocked the weakness of Russian air defenses.

“Did the occupiers admit the helplessness of their air defense system? Or their helplessness in front of the Crimean partisans?” Oleksiy Arestovich said on Telegram.

Elsewhere in Ukraine, the mayor of the major port city of Mykolaiv, Vitaliy Kim, said a Russian attack killed one of Ukraine’s wealthiest men, Oleksiy Vadatursky, and his wife, Raisa. Vadatursky headed a grain production and export business.

It “was not an accident, but a well-thought-out and organized premeditated murder,” Podolyak said. “Vadatursky was one of the largest farmers in the country, a key person in the region and a major employer. That the exact hit of a rocket was not just in a house, but in a specific wing, the bedroom, leaves no doubt about aiming and adjusting the strike.”