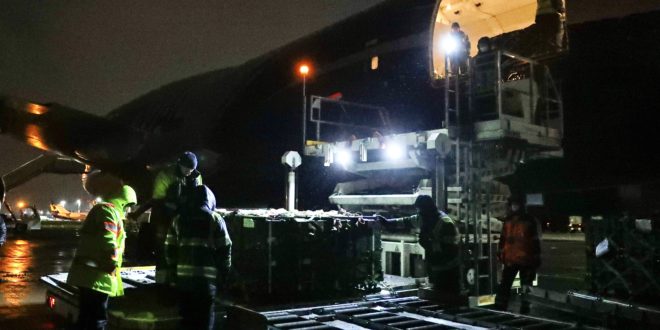 The shipment - and $2.7 billion USD since 2014 - demonstrates U.S. commitment to helping Ukraine bolster its defenses

Event: The Department of State continues to advise U.S. citizens to reconsider travel to Ukraine due to increased threats from Russia.  Concerning reports of further unusual Russian military activity near Ukraine’s borders and in occupied Crimea continue, and U.S. citizens are reminded the security conditions may change with little or no notice.  For more information, please review the latest travel advisory on Ukraine’s country information page and the information on what the U.S. government can and cannot do to assist you in a crisis overseas.

The first shipment of assistance recently directed by President Biden to Ukraine arrived in Ukraine tonight. This shipment includes close to 200,000 pounds of lethal aid, including ammunition for the front line defenders of Ukraine.

The shipment – and $2.7 billion USD since 2014 – demonstrates U.S. commitment to helping Ukraine bolster its defenses in the face of growing Russian aggression., Sec of State Biden said.

are providing to Ukraine to strengthen its ability to defend itself against Russia’s unprovoked and irresponsible aggression.

On January 19, the Department notified Congress of its intent to deliver five Mi-17 helicopters currently held in DoD inventories to Ukraine under the Excess Defense Articles program.

Spoke with Foreign Minister @DmytroKuleba to coordinate closely with Ukraine, as Allies and partners work to deter further Russian aggression. Ukraine has our unwavering support, and we will impose severe costs on Russia for any further military incursion.

NATO is itching For a proxy war in the Ukraine I was holding off Putin is it a major purpose for existence, Blinken Said

And with Biden’s miserable performance in the first year maybe it’s time for him to Wag the Dog again in a real war rather than the old tired war against Covid.

It was under Biden’s guard that the United States launch the Syrian Yemen and Libyan wars. All under false pretense, but that that didn’t deter Bush in Iraq, and certainly doesn’t deter Biden.

Ukrainian military retain full control over the situation in their operations area.

During the past day, January, 21 2022 and during the current day, as of 11.00 January, 22 there were no ceasefire violations committed by Russian occupation forces.

Illegal and criminal situation in the Joint Forces Operation area is considered as stable.

During the past day the police units that are engaged in the Joint Forces Operation checked 3629 transport vehicles, 3865 persons, 2 of them were inspected for affiliation with the Russian Federation’s armed formations activity. 34 administrative violations were detected and 37 crimes were solved.

1356 persons passed through entry-exit checkpoints to the occupied territory, and 1080 persons to the territory controlled by Ukraine.

The State Emergency Service of Ukraine pyrotechnic units of the Joint Forces demined almost 2,5 hectares of the territory, 76 items were transferred for the disposal of explosive ordnance in order to implement a set of security measures in the interest of civilian population.

The Armed Forces of the Russian federation continue to ignore the agreements within the frameworks of the Trilateral Contact Group.

During the day, the Ukrainian Defence Forces recorded 1 ceasefire violations committed by the Russian occupation forces using weapons prohibited by the Minsk agreements.

There were no casualties.

The Joint Forces retain full control over the situation in their operation area and continue accomplishing their combat missions of defeating and deterring the Russian armed aggression.

Russia has deployed “a group of operatives” into Ukraine to foment a pretext for another invasion of that country, Pentagon Press Secretary John F. Kirby said during a news conference today.

Still, if Russia does invade its neighbor, the United States “will continue to provide security assistance to Ukraine to help them better defend themselves,” Kirby said.

Kirby said the Russian operatives are a part of Russia’s playbook that was used in 2014 when Russia invaded Crimea and later illegally annexed the area. Kirby could not give many details, but said the United States does “have information that indicates that Russia is already working actively to create a pretext for a potential invasion, for a move on Ukraine.”

The Russian operatives are pre-positioned in Ukraine to conduct “what we call a false flag operation — an operation designed to look like an attack on … Russian speaking people in Ukraine, again, as an excuse to go in.”

The United States also has information that Russia is fabricating Ukrainian provocations in state and social media as some sort of pretext for invasion, he said. “We’ve seen this kind of thing before out of Russia,” he said. “When there isn’t an actual crisis to suit their needs; they’ll make one up. So we’re watching for them.”

There were also cyberattacks on Ukrainian government websites. Kirby said it is too early to attribute those attacks on Russia, but noted that it is also in the Russian playbook.

Kirby wouldn’t go into much detail on the operatives themselves, but noted that Russia often “hybridizes” their personnel drawing them from their intelligence communities, their security services or their military.

There are American forces in Ukraine working to advise and assist the Ukrainian military. There are less than 200 Florida National Guardsmen assigned to the mission.

Kirby said the United States believes Russian President Vladimir Putin has not decided on invasion yet. But if there is an incursion, force protection for American personnel remains paramount. “We will make all the appropriate and proper decisions to make sure that our people are safe in any event,” Kirby said.

In Brussels, NATO Secretary General Jens Stoltenberg also said there is room for diplomacy to work. He had met with Russian officials as part of the NATO-Russia Council at the alliance headquarters. “We had a very serious and direct exchange on the situation in and around Ukraine and the implications for European security,” he said. “There are significant differences between NATO allies and Russia on these issues. Our differences will not be easy to bridge. But it is a positive sign that all NATO allies and Russia sat down around the same table, and engaged on substantive topics.”

One Russian demand is that Ukraine not become a member of NATO. Spotlight: NATO

“Ukraine is a sovereign nation,” Stoltenberg said. “Ukraine has the right to self-defense. Ukraine is not a threat to Russia. Russia has the biggest land power in Europe. They are one of two major nuclear powers. They have invested heavily in new, modern capabilities over the last years.”

Russia has also said Ukraine threatens Russia. The secretary general said Russia continues to illegally occupy Crimea and controls the separatists in eastern Ukraine. “The whole idea that, … Ukraine threatens Russia is absolutely to put the whole thing upside down,” he said. “It is Russia that is the aggressor. It is Russia that has used force and continues to use force against Ukraine.

“This crisis is [the] making of Russia,” he continued. “And therefore, it is important that they de-escalate.”

The White House has accused Russia of sending saboteurs into eastern Ukraine in order to stage an incident that could provide a pretext for an invasion if Moscow’s security demands are not met.. RFE/RL

White House: January 14 that U.S. intelligence indicates that Russia “has prepositioned a group of operatives to conduct a false-flag operation in Ukraine. The operatives are trained in urban warfare and using explosives to conduct acts of sabotage.”Our intelligence indicates that Russian influence actors are already starting to fabricate Ukrainian provocations in state and social media to justify a Russian intervention…”– White House spokeswoman Jen Psaki

The comments come after a week of high-stakes talks in Geneva, Brussels, and Vienna between U.S. and European officials with Russian diplomats who have essentially demanded a whole-scale reorganization of Europe’s security structure.

Russia has deployed nearly 100,000 troops to areas along Ukraine’s borders, prompting Western intelligence officials to warn that Moscow could be poised to conduct a new invasion of Ukraine.

“Our intelligence also indicates that Russian influence actors are already starting to fabricate Ukrainian provocations in state and social media to justify a Russian intervention and sow division in Ukraine,” Psaki said.

“The Russian military plans to begin these activities several weeks before a military invasion, which could begin between mid-January and mid-February,” she added.

In Moscow, the U.S. intelligence assessment, which was earlier announced by unnamed U.S. officials, was derided.

“Until now, all these statements have been unfounded and have not been confirmed by anything,” Kremlin spokesman Dmitry Peskov was quoted by state news agencies as saying.

As the United States and its Western allies have raised alarms over a massive Russian troop buildup near Ukraine, Russia has asked for written guarantees that the NATO military alliance will not admit former Soviet states such as Ukraine, among other demands.

Washington and its NATO allies held three rounds of talks with Russia in an attempt to defuse the situation, but while expressing openness to dialogue they have made clear that NATO’s open-door policy for sovereign states is not negotiable.

Moscow, which has denied that it is planning to invade Ukraine, has said it could not wait indefinitely for a written Western response to its security demands.

“We have run out of patience,” Foreign Minister Sergei Lavrov said during his annual foreign policy conference on January 14. “We expect a written response from our Western colleagues on our proposals.

“We are convinced that, if there is a will to compromise, one can always find mutually acceptable solutions,” he said.

Earlier, a U.S. official who discussed the alleged “false-flag” operation said the U.S. intelligence was based on intercepted communications and observations of the movements of people.

Fighting between Ukrainian government forces and Russia-backed separatists who control parts of Ukraine’s Donetsk and Luhansk regions has killed more than 13,200 people since April 2014.

Several Ukrainian government website were hit by hackers overnight, disabled and defaced by poorly worded cybergraffiti that made threats about Ukraine’s sovereignty. As of the evening of January 14, more than 12 hours after going down, the Foreign Ministry’s website and several others remained out of service.

Ukraine’s Security Service said in a statement late on January 14 that its criminal investigation revealed some signs of the involvement of “hacker groups associated with the special services of the Russian Federation.”

No group has taken responsibility for the attack, but Russian hackers linked to Moscow have repeatedly been blamed for cyberattacks on Ukrainian government websites and infrastructure in the past.

U.S. officials have threatened Russia with “massive and severe” sanctions and other measures if a new invasion of Ukraine does occur. Among the measures floated publicly include cutting Russia out of the SWIFT global system for bank messaging and major new export restrictions of technology to Russia.

New legislation making its way through the U.S. Senate threatens new restrictions on the Nord Stream 2 gas pipeline to Germany, as well as personal sanctions against President Vladimir Putin if an invasion occurs.

With reporting by The New York Times and Reuters

Previous China takes Taliban Under its Wing, Has Access to U.S. Military Assets
Next BEHIND THE SCENES OF AMERICAN SNIPER