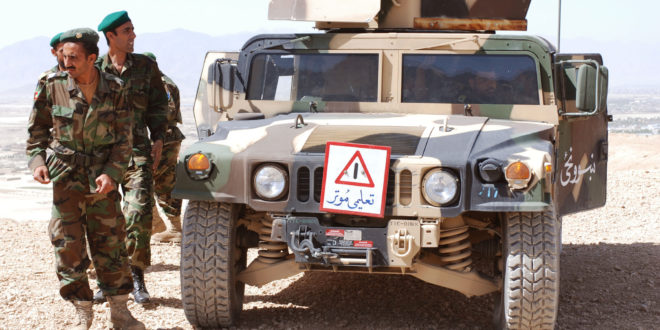 Soldiers from the Afghan National Army train in Humvees at the Kabul Military Training Center in Kabul, Afghanistan. The five-month course is led by Capt. Todd Klusek and Army Capt. William Snyder and teaches ANA soldiers how to properly maintain and operate Humvees. To date, 75 ANA soldiers have graduated the course with some returning as course instructors. (U.S. Navy photo/Petty Officer 1st Class Douglas)

China takes Taliban Under its Wing, Has Access to U.S. Military Assets

With US Away, China Gets Friendly with Afghanistan’s Taliban Asim Kashgarian VOA

It’s approaching six months since the Taliban took over the Afghan capital, Kabul, on August 15. And in the months since the U.S. withdrawal from Afghanistan, neighboring China has taken a keen interest in the fate of the Central Asian country.

The interest, in fact, predated the Taliban takeover. In late July, Chinese Foreign Minister Wang Yi and a nine-member Taliban delegation met in the northern Chinese city of Tianjin. The meeting, some analysts said at the time, underscored Beijing’s warming ties with the Islamist group and the Taliban’s growing clout on the global stage.SEE ALSO:China Urges Afghan Taliban to Cut Ties with All Terrorists

In addition, last October, Foreign Minister Wang spoke about China’s expectations for Afghanistan’s future after he had met with the Taliban interim government representatives in Doha, Qatar, where the two parties “decided to establish a working-level mechanism.”

China’s expectations, Wang said, include the following: Build a more inclusive political structure in which all ethnic groups and factions play a part; implement more moderate foreign and domestic policies, including the protection of women’s rights; “make a clear break with all terrorist forces, including the Islamic State and the East Turkestan Islamic Movement”; and pursue a peaceful foreign policy, especially with neighboring countries.

However, since the Taliban regained control of the country — two decades after the U.S. and its allies had toppled it in 2001 — no country, including China, has officially recognized its legitimacy.

Beijing, though, according to experts, has participated in friendly bilateral interaction with Kabul to build a functioning relationship with Taliban authorities.

“What has been surprising has been China’s willingness to be seen so publicly as doing this and being the most forward of Afghanistan’s many neighbors to be doing this,” said Raffaello Pantucci, a senior fellow at the S. Rajaratnam School of International Studies in Singapore.

The Taliban’s appointment of a new ambassador to Beijing this month reflects pragmatism by the leaders of the Islamist group, who see China as an important partner, Pantucci told VOA.

After the Taliban had appointed its ambassador to Beijing, the former Afghan ambassador to China, Javid Ahmad Qaem, resigned from his job through a handover note posted on Twitter on January 9.

“Now that they (the Taliban) introduced someone and China has agreed to it, it is clear that it was the Chinese government’s decision,” Qaem told VOA, adding that it could not be possible without China’s approval.

Beijing has also been speaking up for the Taliban on international stages, Pantucci said.

“Additionally, we have seen Beijing quite actively lobby for the Taliban authorities in international formats like the U.N. as well as more widely in advance of desired Taliban goals.”

U.N. Secretary-General Antonio Guterres called Wednesday to unfreeze Afghan assets overseas, a move China’s Ambassador Zhang Jun spoke out in support of in front of the Security Council. Imposing sanctions and freezing assets “are no less lethal than military intervention,” Zhang said, according to The Associated Press.

Some $9.5 billion of Afghanistan’s central bank assets have been sanctioned by the U.S. since the Taliban regained control of Kabul last August, overthrowing the internationally recognized former Afghan government.

“We once again call for the unfreezing of Afghanistan’s overseas assets as soon as possible,” Zhang said during last month’s U.N. Security Council meeting. “These assets should be returned to their real owners and cannot be used as a bargaining chip for threats or coercion.”

According to Michael Kugelman, the deputy director of the Asia Program and senior associate for South Asia at the Wilson Center, this “cordiality” between China and the Taliban should not be viewed as a prelude to recognition.

“China is still a long way off from that, and it’s unlikely to take that step unless several other countries do first, or at the same time,” Kugelman told VOA.

“No matter how repressive the Taliban may be,” Kugelman said, Beijing will be comfortable engaging with the Taliban if China concludes it is safe on the ground.

“This means that its interests in Afghanistan are shaped by security conditions and not by considerations about human rights and inclusivity,” Kugelman told VOA. “This is especially the case for China, an authoritarian state that prizes stability above all else.”

The U.S. and other Western countries, as well as rights groups such as Human Rights Watch, have called on the Taliban to respect the rights of women and minorities in Afghanistan and form an inclusive government.

According to Andrew Small, a senior transatlantic fellow with the Asia Program at the German Marshall Fund of the United States, China had hoped for a government in Afghanistan that, although Taliban-dominated, could “tick enough boxes with the international community” to achieve diplomatic recognition.

“It means that Beijing faces an operating context there that still seems to be politically provisional and remains constrained by economic sanctions,” Small told VOA.

Although China is willing to give small volumes of humanitarian aid in the short term and provide a little bit more economic support, Beijing is still “uncertain how the Taliban’s dealings with militant groups in the region” will develop, Small said.

China still has “questions about what they (the Taliban) are willing to do with Uyghur fighters.”

China has asked the Taliban to curb the insurgency of the ETIM members in Afghanistan. In an interview with China state media Global Times in September, a Taliban spokesperson Suhail Shaheen said many Uyghur fighters had left his country on its request.

“I know after the Doha (Qatar) agreement, many have left Afghanistan, because we categorically said that there is no place for anyone to use Afghanistan against other countries, including neighboring countries,” Shaheen told the Global Times.

By supporting and playing the long game with the Taliban, China is building a strong diplomatic foundation with the regime, said Hasan Karrar, who specializes in modern Chinese and Central Asian history at the Lahore University of Management Sciences in Pakistan.

“But also [Beijing is] remaining mindful of why the Taliban remain isolated internationally.” Karrar told VOA. “For example, I do not believe China can ignore the fact that girls can’t go to school in the new Afghanistan.”

Roshan Noorzai from VOA’s Afghan Service contributed to this story.