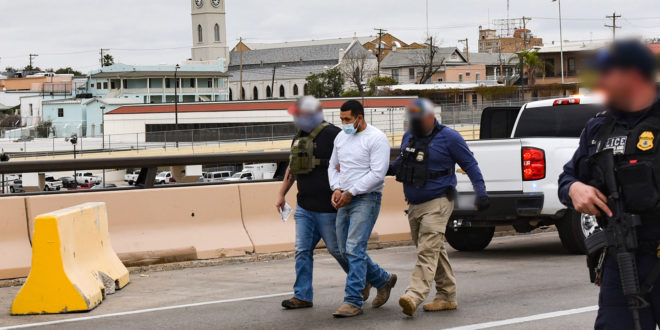 Mexican national Rafael Silverio Rojas Estefania, 26, was taken to the international boundary of the Lincoln/Juarez Bridge in Laredo, Texas, where he was handed over to Mexican authorities Thursday.

Mexican national Rafael Silverio Rojas Estefania, 26, was taken to the international boundary of the Lincoln/Juarez Bridge in Laredo, Texas, where he was handed over to Mexican authorities Thursday.

Rojas has been removed from the U.S. on three previous occasions.

On Oct. 29, 2018, Mexican authorities in Guanajuato, Mexico, issued a warrant for his arrest. He is wanted for homicide.

How porous is the southern border? An illegal immigrant arrested three times by local police in the U.S. and wanted for murder in Mexico just got deported for the fourth time. Immigration and Customs Enforcements (ICE) classifies the Mexican national, Rafael Silverio Rojas, as a “noncitizen foreign fugitive.” This month the agency’s Enforcement and Removal Operations (ERO) handed Rojas to Mexican authorities at the international boundary of the Lincoln/Juarez Bridge in Laredo, Texas. Rojas, who is 26 years old, had been removed from the U.S. on three previous occasions before the most recent encounter. Somehow the fugitive managed to enter the country through the southern border again and again.

Roja’s history of illegal border crossings began in 2017 when the U.S. Border Patrol sent him back home in early July after an apprehension. He was removed twice in 2020, according to ICE, before being arrested by ERO officers in Laredo on February 23. The fugitive illegal immigrant was also arrested by the Laredo Police Department on three occasions for assault and bodily injury in 2021, federal authorities reveal. In late October of 2018, Mexican authorities in Guanajuato, in the country’s central region, issued a warrant for Rojas’ arrest. He is wanted for homicide. A Guanajuato newspaper article about Rojas’ latest deportation says Guanajuato is the Mexican state that saw the most migrants deported by the Trump administration. Of 89,000 Mexicans “repatriated” in the first five months of the Trump administration, the story says 6,566 were from Guanajuato.

It is no secret that there is a national security and humanitarian crisis along the famously porous southern border and the Rojas case is just another example of how dire the situation is. Last year the federal government reported record-breaking Mexican border arrests. Federal agents apprehended an astounding 1,659,206 illegal immigrants at the southwest border in 2021, breaking the previous high of 1,643,679 in 2000. In fiscal year 2020, federal agents only arrested 400,651 on the southern border. The upsurge in just one year is difficult to grasp. Eight of the nine Border Patrol sectors saw triple-digit percentage increases in illegal immigrants over last year and one, Yuma in Arizona, reported an eye-popping 1,200.4% hike in apprehensions. The agency’s Del Rio sector in Texas had an unbelievable 542.7% surge. The Rio Grande Valley sector, also in Texas, saw a 508.7% increase and led all stations with 549,000 arrests. Del Rio reported 259,000 apprehensions which surpassed Border Patrol divisions in Texas and Arizona that typically see more traffic. Two other Texas stations, Big Bend and EL Paso, recorded apprehension gains of 331.9% and 256.5% respectively. Big Bend and El Centro in California were the only sectors that did not see six-digit apprehensions this year, though both reported major increases over 2020—331.9% for Big Bend and 115.4% for El Centro.

Like Rojas, most of the illegal aliens (608,000) arrested by the U.S. in 2021 came from Mexico followed by the Central American nations of Honduras (309,000), Guatemala (279,000) and El Salvador (96,000). In the last month of the fiscal year, migrants from those four Latin American countries accounted for well over half (63.7%) of apprehensions along the Mexican border. The final month of the fiscal year, which ended in September, also saw a final spike of migrants from Haiti (132%), Turkey (89%), India (82%), Ukraine (81%) and even China (75%). The number of illegal aliens from Russia nearly doubled from 758 to 1,432 during the same period,  according to year-end stats provided the Department of Homeland Security (DHS). The Biden administration partially dealt with the onslaught by dispersing hundreds of thousands of illegal immigrants throughout the U.S. The administration’s open border policies are also slamming the overwhelmed U.S. immigration court system, creating the largest backlog of cases in history. At the end of December pending cases reached a shocking 1,596,193, according to government figures.