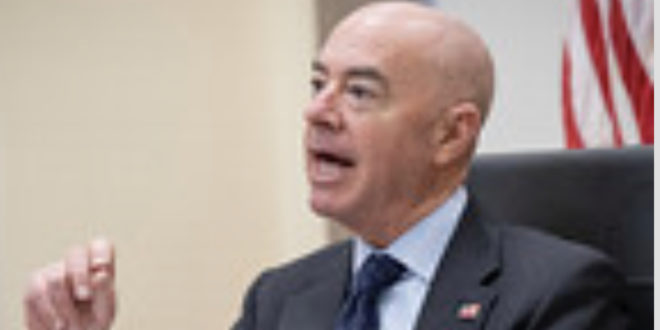 And thus it began after 6 January according to Mayorkas. DHS is taking under Secretary Mayorkas’s leadership to comprehensively combat domestic violent extremism, including violent white supremacy.

“Center for Prevention Programs and Partnerships. CP3 will help build local prevention frameworks to provide communities with the tools they need to combat terrorism and targeted violence,” said Secretary Mayorkas. “Individuals who may be radicalizing, or have radicalized, to violence typically exhibit behaviors that are recognizable to many but are best understood by those closest to them, such as friends, family, and classmates.”

To be accomplished by “increased efforts to better identify and evaluate mis- dis- and mal-information (MDM) with a homeland security nexus, including false or misleading conspiracy theories spread on social media and other online platforms that endorse violence,”

Today, the Department of Homeland Security (DHS) released a report on how it can best prevent, detect, and respond to potential threats related to domestic violent extremism within the Department. This report is the product of a comprehensive high-level internal review that Secretary of Homeland Security Alejandro N. Mayorkas directed, and it highlights the steps that DHS should take to improve our ability to adequately identify and address related threats. These recommendations will also better enable the Department to continue executing its critical mission and ensure its employees are safe and secure at work. Among the key recommendations, which the Department is working to implement with urgency, the report highlights the need for clear guidance as to what constitutes violent extremist activity and how to address it, improved workforce training for how to identify and report this activity, and the development of a centralized, DHS-wide investigative case management system and information sharing mechanism for investigating related allegations. Secretary Mayorkas has directed DHS to swiftly implement the report’s recommendations.

“Every day, the more than 250,000 dedicated public servants at DHS work to ensure the safety and security of communities across our country. To ensure we are able to continue executing our critical mission with honor and integrity, we will not tolerate hateful acts or violent extremist activity within our Department,” said Secretary of Homeland Security Alejandro N. Mayorkas. “The findings of this internal review highlight key steps that our Department will continue to take with urgency to better prevent, detect, and respond to potential internal threats related to domestic violent extremism, and protect the integrity of our mission.”

Over the coming months, DHS will focus on implementing the report’s recommendations to include establishing baseline policies and guidance, promoting employee awareness, and enhancing methods to identify and address violent extremist activity, while continuing to protect privacy, civil rights, and civil liberties. DHS has already begun addressing many of the gaps identified in the report, including by updating related employee training modules and developing guides for leaders to reference when discussing violent extremist activity.

In April 2021, at the direction of Secretary Mayorkas, a cross-Departmental working group began a comprehensive review to identify how to best prevent, detect, and respond to potential threats related to domestic violent extremism within DHS. The scope of this review included identifying potential gaps in existing resources, authorities, and capabilities, including those related to the initial and ongoing screening and vetting of personnel to detect potential domestic violent extremism-related activity. Secretary Mayorkas pledged to share the results of this review with Congress and the public, and today’s release of the report fulfills that pledge.

Domestic violent extremism poses one of the most significant terrorism-related threats to the United States. During the Biden-Harris Administration, DHS has prioritized combating all forms of terrorism and targeted violence, including through its efforts to support the first-ever National Strategy for Countering Domestic Terrorism. Since January 2021, DHS has taken several steps in this regard, including: