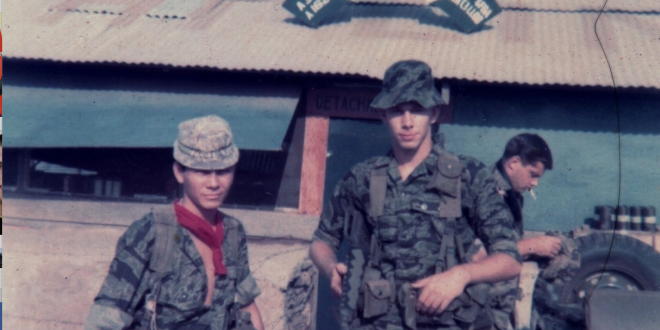 Grunt Slang in Vietnam: Words of the War.

SOF Interview with Gordon Rottman—Grunt Slang in Vietnam: Words of the War.

Have you ever found yourself throwing out some slang word recalled from Vietnam at an appropriate or not so appropriate moment? Most Vietnam vets have done this. I have. That was a long time ago, 50 years or more for most of us. Sometimes those memories are a bit rusty; nonetheless those old and sometimes funny or odd words spill out. There are a few Vietnam slang dictionaries about, handback, paperback, and on-line, but to me there more to slang dictionaries that a simple word definition. I started collected slang while in Vietnam and ever since. Casemate Publishers recently released Grunt Slang in Vietnam: Words of the Warin hardback and Kindle formats, 240 pages and 1,500 entries. Its approach to the study of Vietnam slang is somewhat different than found in other dictionaries.

Three hots and dry socks.       There was little more a grunt could gratefully expect than dry socks (which can be inferred as a dry place to sleep) and three hot meals a day, even if just heated C-rats.

thermite grenade         AN-M14 incendiary hand grenade is actually thermate (TH3) filled, not thermite. Mainly used to destroy equipment and prevent its capture/use. Three were carried in tanks to destroy the main gun, radio, and engine. TH3 is a more effective compound than thermite and burns at 4,330°F.

three-quarter-ton          The 3/4-ton 4×4 M37B1 cargo truck. Produced by Dodge from 1951-68. Occasionally called a “weapons carrier.” Various types of communications-electronic shelters could be mounted.

through and through   Bullet or fragment wound that exited the body (T&T). This does not necessarily indicate a “clean wound.” Organs, major blood vessels, and bones could still have been hit.

SOF    How does your military background relate to a Vietnam War slang book?

GLR    I’ve long had an interest in military slang—I wrote two World War II slang dictionaries (FUBARand SNAFU). Vietnam War slang was particularly interesting as it has origins dating back to World War II, the Korean War, and even French, Chinese, and Filipino origin terms. I stayed in the Army and continued to collect terms from the Vietnam War. Included with that is the rich “Pidgin Vietnamese-English.” There are also brief discussions of unusual subjects.

SOF    What was your assignment in Vietnam?

SOF    You remained in the Army after Vietnam?

GLR    I joined the Texas Army National guard and for 14 years was the full-time operations sergeant for an airborne infantry battalion and a long-range reconnaissance patrol company. This was followed by 10 years in the Army Reserve in intelligence positions.

SOF    You were also a writer for the Army?

GLR    Yes, for 11 years I was a Special operations forces scenario writer for the Joint Readiness Training Center at Ft Chaffee and later Ft Polk.

SOF    What makes Grunt Slag in Vietnamdifferent from other slang dictionaries?

GLR    It’s different in a number of ways. For the more common or popular terms I provide its origins, background. I also clarify the meaning, intent, or context the terms used in. There are instances of misconceptions of the terms’ meaning. I examine “Pidgin Vietnamese-English,” I also discuss widely used phrases, not just single words, and avoid abbreviations and acronyms.

SOF    You say you include phrases. What are some examples?

GLR    There are a variety of these. Many are catchphrases from movies, TV shows, and commercials. Others are simple statements accepted as gospel like, “Charlie rules the night,”

“dumb as a rock,” “One ‘aw shit erases a hundred Attaboys,” or “don’t know shit from Shinola.” An example from TV is Sargent Schultz’s “I know nothing, nothing!” And let’s not forget “Where the rubber meets the road” and “Takes a licking and keeps on ticking.”

SOF    You mentioned “Pidgin Vietnamese-English,” we all have heard a few words and phrases. Were their many?

GLR    I was surprised that I could not locate a study or paper studying this subject. Noting comprehensive was found, but I have included an appendix with over 50 Pidgin Vietnamese-English words and phrases. Just remember that the spelling and pronunciation of these words were not standardized in any way so may be different than what you recall.

SOF    You mentioned avoiding abbreviations and acronyms as found in many books and on-line.

SOF    Do you discuss any personalities?

GLR    To a point there are a few nicknames for notable individuals and I discuss individuals such as “Bobby the Weather Girl” (there were actually two Bobby’s) and John Wayne. I found there were only eight actors who served tours in Vietnam and even fewer who served during the war, but never deployed.

GLR    The book is also a source or trivia, factoids, as well as a myth buster. There are discussions of, for example, discussions about the various field rations, Saigon tea girls, “Salt and Pepper,” Wannabes and Stolen Valor, and Jody Calls, and more.

SOF    When did you begin writing and how did you get into that as a second career?

GLR    I had always wanted to write and began writing articles for military journals and magazines in 1976 and eventually became a “recognized authority.” In 1984 my first book, on Special Forces, was published by Osprey Publishing. They’ve since published 110 of my books.

SOF    What were the subject areas of the 140 books you’ve published?

GLR    Osprey has a wide range of series covering campaigns and battles, tactics, uniforms and equipment, weapons, and specialized units. They tend to be dry, but researching such a wide range of books from the World War II era to the present certainly expands ones experience. A number of my books are Vietnam related. I’ve recently started doing historical Western novels and young adult adventure novels.

SOF    We noticed there was the use of “four-letter” words.

GLR    The book’s far from PC. Profanities are spelled out along with racially and sexually derogatory words to accurately discuss the subject. “Kick ass and take names” and “shit-burning detail” were in everyone’s vocabulary. That is just the way it was and to soft peddle it and pretend things were rosy does not give a realistic view of the war and the veterans.

Previous 17 SF KIAs — August 23, 1968: NVA THROUGH THE WIRE…FOB 4/CCN
Next Cowboy: The Interpreter Who Became a Soldier, a Warlord, and One More Casualty of Our War in Vietnam