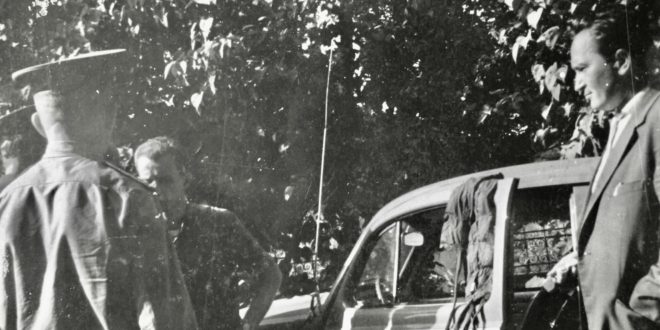 A photo purporting to show Makinen during his arrest by Soviet police.

How The KGB Caught America’s ‘Volkswagen Spy’: A Story of Cold War Espionage

A photo album sitting on the shelves of Ukraine’s KGB archives reveals how an amateur U.S. spy was captured more than 60 years ago.

In the summer of 1961, a quiet, serious American student named Marvin Makinen pulled up to the Soviet border in a Volkswagen car. The chemistry student told border guards he was about to begin a weeks-long road trip through the U.S.S.R.

The Soviet border guards made note of Makinen, then waved him through into Socialist Ukraine.

Some time earlier, the 21-year-old had been approached by American intelligence operatives in West Berlin, who asked Makinen to embark on the journey to gather information on Soviet military and civilian infrastructure.

Unbeknown to Makinen, his Soviet road trip was being watched by KGB agents, and he was eventually arrested in Kyiv. His capture and subsequent imprisonment were reported internationally, then largely forgotten.

But in the archives of the Security Service of Ukraine (SBU) in Kyiv, RFE/RL stumbled on a fascinating report made by the KGB, detailing the stalking of the young American with photographs and illustrated montages. The photos below are pages from that folder.

Makinen is still alive and working in academia in Chicago. He responded to an e-mail from RFE/RL about the discovery of the KGB folder by saying it “does not contain the full story” about the events of 1961, but did not elaborate.

Makinen admitted in a 2013 interview that he had been engaged in espionage in the U.S.S.R. and had “no hesitation” in accepting the dangerous assignment, largely due to his disgust at the way communist countries oppressed their citizens.

The young American’s Soviet adventure began in western Ukraine, on the border with Czechoslovakia, and would have taken him through Crimea, Kharkiv, Moscow, and Minsk. Instead, Makinen’s trip was dramatically cut short when he was arrested in Kyiv.

The KGB report is a mixture of surveillance photos, reenactments, and photos made by Makinen, but the folder doesn’t distinguish which photos are staged.

The KGB report alleges that Makinen appeared “wary and noticeably worried” at the Soviet border with Czechoslovakia. His earlier-than-scheduled arrival into Soviet Ukraine aroused suspicion, as it enabled him to witness unspecified military activities.

Makinen later admitted that he was underprepared for his spectacularly risky assignment.

When Makinen asked his American handlers what he should do if he was caught, the student was told he would have to “wiggle out as best as you can.”

The KGB report of a secret search of the VW detailed “a body belt containing seven exposed photographic films” and a “high-quality camera” and a notebook with several pages torn out, among other items.

Makinen’s innocuous-sounding notes were later alleged to have been code for intel. A 1961 Time magazine article reported on the Soviet interpretation of his notes: “Near city I ate three sandwiches…At 156 kilometers, it started raining…Encountered peasants.”

In the map above showing the site of Makinen’s arrest on July 27, 1961 (top left), three different routes indicate his alleged travel by foot, in his car, and in a taxi before his encounter with a suspicious local.

In a 2013 interview, Makinen described his arrest, which he said stemmed from a passerby spotting him and alerting a nearby military serviceman. “I totally underestimated how wary and suspicious Soviet citizens were of foreigners,” he said.

A caption beneath the photo above claims Makinen “hid behind bushes and attempted to take photos, but every time he lifted his camera and saw a passerby he immediately closed his camera case and lowered his camera.”

The report in the SBU archives alleges that while Makinen was being questioned around the time the photo above was made, he “attempted to open his camera to expose the film [to destroy the images inside], but was stopped from doing so.”

Makinen said he realized, as he was being held awaiting trial, that “there was no way I was going to get out of the charges. The KGB had the photographic films I had taken,” he recalled in the 2013 interview. “Also, I had collected a considerable amount of information, and it was not typical tourist observations and ­photographs.”

Makinen, who had just turned 22 before his trial, potentially faced the death penalty. After suffering through “enormous” stress during his interrogation, he was sentenced to eight years in prison by a military tribunal.

Makinen served nearly three months of his sentence in solitary confinement. He was released, and flew back to the United States as part of a prisoner swap in October 1963.

Makinen later became deeply involved in investigating the fate of Raoul Wallenberg, a Swedish diplomat credited with saving tens of thousands of Jews during the Holocaust and who disappeared while in Soviet custody.

During his prison time, Makinen said he heard several stories from other prisoners who had encountered Wallenberg long after the Soviets claimed he died from a heart attack in 1947.

By Amos Chapple, a New Zealand-born photographer and picture researcher with a particular interest in the former Soviet Union.

Previous Street Battles Rage in Eastern Ukraine, as Russian Artillery Hammers Industrial Hub City
Next ‘One of the Most Violent Battles’ in European History: The Fight for Donbas