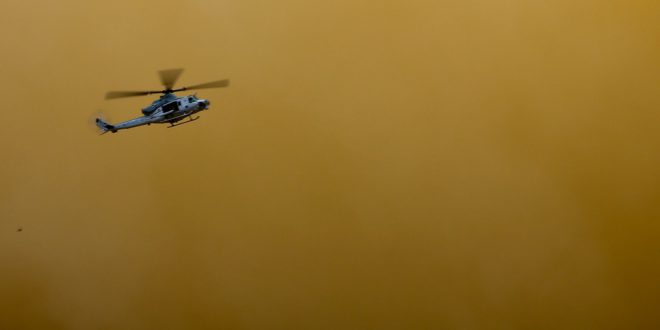 The Marine next to me started screaming, which I could clearly hear over the engine and wind noise

As a Marine Corps lance corporal, I was going through helicopter training at Camp Lejeune.

Our bird lands, we jump on, and I find that my seatbelt is adjusted out all the way. The military being the military, you can’t simply pull a tab and get it to shrink down to the size needed. No, that would be far too easy. You have to open it up, fiddle with it, latch it back – oh, no, still not right, unlatch and try again until you get it right.

The problem was, we were already 50 feet in the air and going up. So no, I’m not going to unlatch my seatbelt. I’ll just live with the eight inches of slack. But in a few minutes, we’re cruising along nice and level at 1200 – 1500 feet and I reach for the latch. What’s the worst that could happen?

Can you say “autorotation”? As in, suddenly the helicopter has all of the flying characteristics of a brick. It plummets straight down.

I came up out of the seat until the belt stopped me, but by that time I had the sensation that the Huey was falling out from underneath me, my feet were out the door in the slipstream, and my M-60 was going out the door.

I clutched the Pig tight to my body while at the same time slapping my other hand down on something to keep me from going out of the helicopter. It landed on the leg of the Marine beside me, and my fingers dug in. He started screaming, which I could clearly hear over the engine and wind noise.

He tried to pry my fingers off, still screaming, which just made me dig them in deeper. If I was going out the door, then his leg was going with me.

I don’t know how long this went on, but it seemed like a long time. Finally, the pilot brought it back to flying capability and I crashed down to the seat. I wasted no time in finding a section of the tubular aluminum seat frame that I could clutch for the rest of the ride, which was a damnably unpleasant nap-of-the-earth roller coaster over trees and fields.

When we got back on the ground, my seatmate pulled his pants down to examine his injuries. He was a dark green Marine – very dark – but you could still see bruises for every one of my fingers.

“Dude,” I said, “You’re lucky my hand didn’t come down between your legs, because if I’d grabbed your balls, I’d have held on just as tight!”

I had to buy him a couple of beers at the E Club that night to get that thousand-yard look out of his eyes.

Al Hagan served 4 years in the Marine Corps, and has retired to the woods of Texas following a career as an IT project manager, with a few years in the intelligence community thrown in for flavoring.