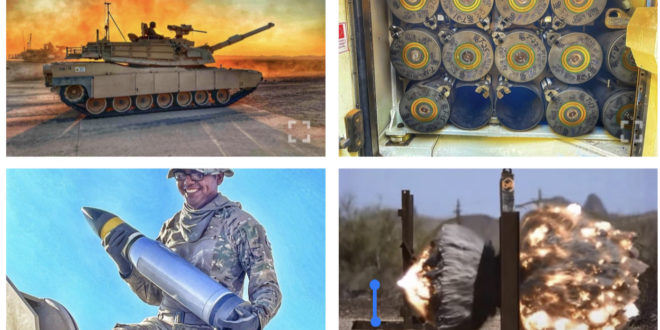 Under 112 degree-plus heat, they simulated combat missions with full ready rack combat loads of the XM-1147 Advanced Multi-Purpose (AMP) round for their M1A2 Abrams Main Battle Tanks against a host of actual and simulated threat targets.

Tank Crew 1 commanded by 2nd Lt. Jake Hall, with Gunner Sgt. Spencer Vanderbilt, Loader Pvt. Dalton Diserio, and Driver Pvt. Justin Jones, not only knows what it feels like to roll out in a fully combat loaded tank on an operationally-realistic simulated mission, but they have witnessed the firepower the AMP round brings to the fight.

“This round is not something to be taken lightly,” said Vanderbuilt, of Charlie Company “Crazy Horse,” 1st Battalion “Fighting Eagles” of the 8th Infantry Regiment.

“Being able to see and then destroy anti-tank guided missile targets beyond 2,000 meters and then transition immediately to breaching walls or obstacles is an incredibly powerful feeling!”

“We now know what it feels like to roll out in a fully combat loaded tank on operationally realistic combat missions and recognize how important the AMP round will be to U.S. Army ABCT fighting forces in the fights yet to be fought,” added Hall.

Phillips, said he was amazed by the AMP round’s performance and awesome power.

“The Abrams Tank’s lethality has been re-vAMP’ed!” he said.

Capabilities of the AMP round included the new airburst mode and breaching double reinforced concrete walls.

After shooting over 90 AMP rounds at anti-tank guided missile teams, massed infantry, infantry fighting vehicles and bunker targets, the Crazy Horse armored crews unanimously agreed training conducted during the test was the best in their careers.

The tankers pushed each other hard, testing the AMP round in what evolved into a competitive shooting competition in the Yuma desert, both day and night.

“We do this by having the tank crews employ the tactical service round in a manner and in an environment that closely mimics combat conditions,” said Ramirez.

He went on to explain how the 3rd ABCT tank crews shot over 8 complex modified tank gunnery combat scenarios during the four-day record test.

“Despite extreme desert heat, dust storms and rain squalls, the Crazy Horse crews really impressed me with their level of motivation and drive to test the AMP round,” said Mr. Kent Evans, the Maneuver Requirements Division Soldier and Capability representative from Fort Benning, Georgia.

The XM-1147 Advanced Multi-Purpose (AMP) round was designed to enhance a tank crew’s ability to perform missions with greater lethality and survivability, according to Mr. Jeff McNaboe, lead project engineer, Program Manager for Maneuver Ammunition Systems.

Developed by engineers from Picatinny Arsenal, New Jersey, the Advanced Multi-Purpose (AMP) round is a replacement for 4 legacy service rounds.

Previous Officer Richard Houston killed in the line of duty
Next The Bond of Brotherhood: Three brothers who died together at Pearl Harbor: Remains found