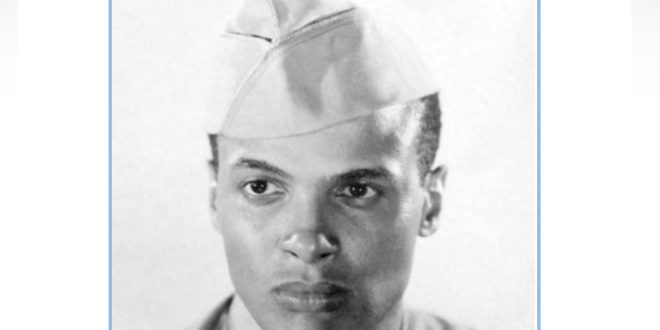 Singer, songwriter, actor and social activist Harry Belafonte was in the Navy during World War II, dropping out of high school in New York City to enlist and contribute to the war effort from 1944 to 1945.

During World War II, his job was to load military ships bound for the Pacific theater.

“It was the worst homefront disaster of World War II, but almost no one knows about it or what followed,” he said.

After the tragedy, Black sailors refused to load ammunition under the same unsafe, segregated conditions that were said to have sparked the explosion. It became known as the Port Chicago mutiny. Fifty of the sailors were convicted of mutiny and sentenced to prison. Most were not released until months after the war ended.

On the evening of July 17, 1944, residents in the San Francisco east bay area were jolted awake by a massive explosion that cracked windows and lit up the night sky. At Port Chicago Naval Magazine, 320 men were instantly killed when two ships being loaded with ammunition for the Pacific theater troops blew up. It was WWII’s worst home front disaster.

Port Chicago Naval Magazine National Memorial preserves the site of the deadliest home front disaster of World War II, honoring those who lost their lives or were affected by the munitions explosion on July 17, 1944. The munitions explosion at Port Chicago Naval Magazine on July 17, 1944, was the largest stateside disaster of World War II. The blast registered 3.4 on the Richter scale,was felt more than 450 miles away and resulted in 320 fatalities and approximately 400 injured. The memorial is located at the site of the explosion, the final resting place for the un-recovered casualties.

Many African American sailors refused to return to work soon after the explosion and 50 were convicted of mutiny in the largest naval trial of its kind in US history. These convictions still stand today despite efforts to overturn them.

In 1994, the Port Chicago Naval Magazine National Memorial was dedicated to the lives lost in the disaster.

Once he completed his service in 1945, Belafonte returned to New York City. He used his GI Bill benefits to pay for his classes at The New School Dramatic Workshop, alongside future actors Marlon Brando and Belafonte’s lifelong friend Sidney Poitier.

To supplement his income while attending acting classes, Belafonte sang at nightclubs at times backed by the music legends that included jazz musicians Charlie Parker, Max Roach and Miles Davis.

Belafonte’s first widely released single, which became his signature audience participation song in virtually all of his live performances, was “Matilda,” recorded on April 27, 1953. His breakthrough album “Calypso” (1956) became the first long-playing record in the world to sell over 1 million copies within a year.

The album introduced American audiences to calypso music and Belafonte was dubbed the King of Calypso.

Belafonte was an early supporter of the civil rights movement in the 1950s and 1960s and one of Martin Luther King Jr.’s friends.

From Feb. 5-9, 1968, Belafonte guest hosted “The Tonight Show,” substituting for Johnny Carson. Among his guests were King and Sen. Robert F. Kennedy.