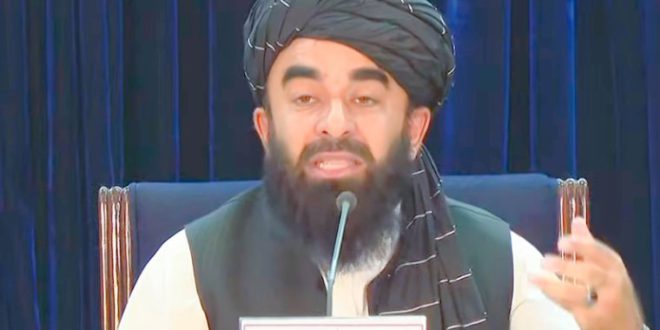 We demand that the United States release the frozen money of Afghans and we are ready to resolve all issues through dialogue.

The Taliban’s acting prime minister asked the global community Wednesday to grant legitimacy to Afghanistan’s new government, insisting it has met all conditions required for the official recognition.

Mohammad Hassan Akhund spoke at a conference in Kabul where his interim administration convened to discuss massive economic upheavals facing the country since the Taliban seized power last August. The event was also attended by United Nations officials.

“I call especially on Islamic countries to not wait for others and take the lead in officially recognizing our Islamic Emirate,” Akhund said.

No country has yet recognized the new government, which the Taliban officially refer to as the Islamic Emirate of Afghanistan. Foreign governments are watching to see how the ultra-conservative group will govern the country this time around.

Akhund blamed the current economic crisis on international sanctions and the freezing of roughly $9.5 billion in Afghanistan’s foreign cash reserves by Western nations led by the United States.

The Taliban has named its reclusive leader Mawlawi Haibatullah Akhundzada as a supreme leader and a founding leader, Mullah Mohammad Hassan Akhund, to lead a new Afghan regime as the radical fundamentalist group seeks to establish its rule after the UN-backed government collapsed in mid-August.

The announcement by Taliban spokesman Zabihullah Mujahid on September 7 in Kabul comes eight days after the United States announced the final withdrawal of U.S. and other international forces after a nearly 20-year war against the Taliban and other anti-government elements.

Many of the world’s leading powers have been waiting to see who is in the still-unrecognized government and whether it will act in line with Taliban promises of being more moderate than during its brutal rule 20 years ago, when it enforced a radical form of Islamic law.

Soon after the announcement, Akhundzada issued a public statement that could do little to assuage those international concerns.

“I assure all the countrymen that the figures will work hard towards upholding Islamic rules and Shari’a law in the country,” Akhundzada said in the statement, which was distributed in English.

Later, he welcomed Afghanistan’s “liberation from foreign rule” and vowed the new government would start working “at the earliest” opportunity.

Akhundzada also said the Taliban was committed to international law and to Afghanistan’s treaties and commitments that are “not in conflict with Islamic law.”

Shari’a law, he added, will regulate all matters of governance and life in the country.

At least two of the new ministers are on UN or U.S. lists of designated terrorists. All of them are men.SEE ALSO:Who Is Haibatullah Akhundzada, The Taliban’s ‘Supreme Leader’ Of Afghanistan?

Taliban spokesman Mujahid described the new appointments as “acting” leaders and said there could be changes in the future.

The Taliban claimed victory this week against holdout forces in the Panjshir Valley, although the leader of the National Resistance Front (NRFA) insists he has thousands of fighters and will continue to oppose Taliban control of the region, north of Kabul.

The hard-line Sunni cleric Akhundzada will be a sort of supreme leader with the final word on political, religious, and military affairs under a governing structure that some have likened to Iran’s clerically dominated system.

Separately, another Taliban spokesman, Ahmadullah Wasiq, confirmed to BBC that the country should be known as “the Islamic Emirate of Afghanistan” — the title the group used during its mostly unrecognized rule in 1996-2001 — and Akhundzada’s post is “commander of the faithful.”SEE ALSO:Key Figures In The Taliban’s New Theocratic Government

The 60-something Akhund, a longtime confidant of the late Taliban spiritual leader Mullah Mohammad Omar and former “foreign minister” under the previous period of Taliban rule, is expected to lead day-to-day affairs of the new regime in something akin to a prime ministerial role.

Sirajuddin Haqqani, the leader of a powerful Taliban faction known as the Haqqani network, which is designated a terrorist organization by the United States, will serve as interior minister.

Other senior figures in the new government include Mullah Abdul Ghani Baradar, who has arguably been the most public face of the Taliban, as Akhund’s first deputy.SEE ALSO:Mullah Baradar: The Taliban’s Most Public Face

Baradar was released from Pakistani custody in 2018 at the behest of the United States following the launch of direct talks between the militants and Washington that eventually led to the withdrawal agreement reached in early 2020.

Mawlawi Hannafi, a participant in the international talks in Doha, was named Akhund’s second deputy.

One of the Taliban government’s first tasks will be trying to open diplomatic and economic channels while seeking recognition from foreign governments, some of whom in the West have already signaled policies of “engagement” without such recognition.

NATO member Turkey was among the first foreign governments to react to the Taliban announcement, with Foreign Minister Mevlut Cavusoglu saying, “There is no need to rush” to recognize the new government in Kabul.

“This is our advice to the entire world,” Cavusoglu said. “We should act together with the international community.”

President Recep Tayyip Erdogan, whose administration has been engaged in talks in Kabul and is trying to help restart Kabul airport, said that “it’s hard to call [the newly announced government] permanent, but an interim cabinet has been announced.

“We do not know how long this temporary cabinet will last,” Erdogan said. “Our duty now is to follow this process carefully.”SEE ALSO:China Prepares For A New Era In South Asia After Taliban Takeover

NRFA resistance group leader Ahmad Masud, son of the storied late mujahedin commander known as the “lion of Panjshir,” Ahmad Shah Masud, in an audio message this week rejected the Taliban claim of “victory” and said his ranks would keep up the fight. He also urged Afghans in and outside the country to “start a general uprising.”

On September 7, the brother of the late Ahmad Shah Masud, Ahmad Wali Masud, told a symposium in Geneva that the resistance was “really wounded” but that “any time they can come back.”

“We still have thousands of fighters in the valley,” Wali Masud said, “and any time they can come back and you will be witnessing that one.”

“Yes, we have been wounded and we have been really wounded, but we have not died, we are still alive.”SEE ALSO:Taliban Imposes New Dress Code, Segregation Of Women At Afghan Universities

The Taliban announcement came with U.S. Secretary of State Antony Blinken engaged in crisis talks in Qatar, a U.S. ally that has emerged as a key interlocutor to the Taliban, including to discuss ongoing efforts to evacuate Western nationals and as many as thousands of Afghans who cooperated with the Western-backed administration.

Blinken said on September 7 that the United States had been “engaging with the Taliban…in recent hours” on the evacuation issue.

The militant group declared an amnesty for all Afghans who worked with foreign forces during the war that ousted it from power and said it was in talks with “all factions” to reach an agreement on its future government.

But many reports have said summary executions and house-to-house searches for those who worked with international groups or the previous government are occurring across the country.

Taliban gunmen meanwhile fired warning shots into the air to disperse a rally in Kabul on September 7 by women and others denouncing Taliban rule, urging respect for women’s rights, and fearful of a repeat of the group’s previous brutal rule two decades ago.

Small, isolated demonstrations have been held this week in cities including Herat in the west and Mazar-e Sharif in the north.

Previous Space Spy Wars: low-Earth orbit anti-satellite weapons launch
Next Airmen: Father, on his last deployment, passes the torch to his son, on his first as they deploy together