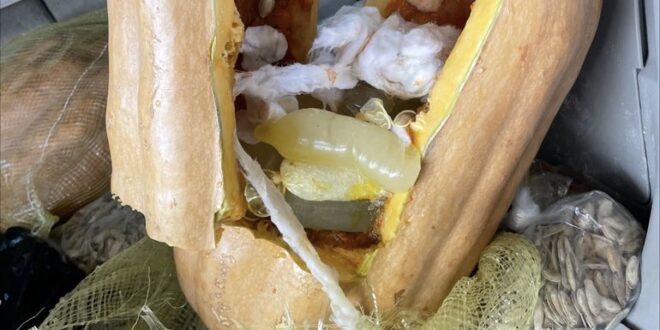 Officers from the U.S. Customs and Border Protection Office recently encountered Halloween decorations that were not what they seemed. Officials from the Eagle Pass CBP in Texas opened the gourds, and found them filled with $402,196 in liquid methamphetamine – stored inside condoms.

“Our frontline CBP officers have seen just about everything and this Tuesday was no exception as they encountered liquid methamphetamine hidden within pumpkins,” said (Acting) Port Director Elizabeth Garduno, Eagle Pass Port of Entry. “They utilized their training, experience, interviewing skills and uncovered a rather novel narcotics smuggling method in the process.”

Officials seized the narcotics, vehicle and turned the driver and passenger over to the custody of Maverick County Sheriff’s Office deputies for further investigation.

Previous New Use For Old Howitzers: On the Front Lines With Ukrainian Artillery Unit
Next ‘The Lady Captain’ Recruited Only the Best Looking Men For Her Swiss Mercenary Band