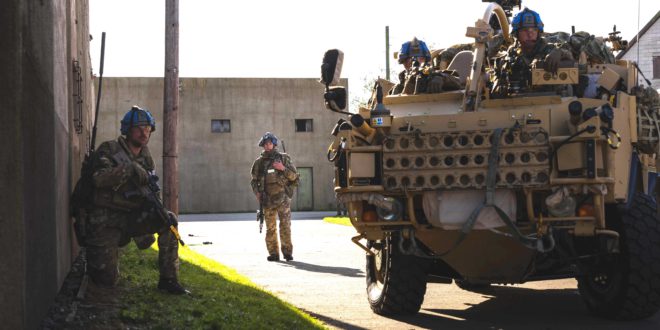 The military government of Mali says France’s decision to withdraw troops is a violation of bilateral accords. At the same time, the government says it wants French forces to leave Mali immediately. VOA NEWS Annie Risemberg

During an address from Elysee Palace Thursday, French President Emmanuel Macron said the withdrawal of French and European forces from Mali would take between four and six months.

But Mali’s military government has now asked that forces with Operation Barkhane and the Takuba Task Force depart immediately.

These decisions, he said, were made without consultation with the Malian side and constitute flagrant violations of French-Malian agreements.

Maiga said that in view of these repeated breaches of the defense agreements, the government asks the French authorities to withdraw, without delay, Barkhane and Takuba forces from national territory, under the supervision of Malian authorities.

The French first intervened in Mali in 2013, in Operation Serval, which was aimed at taking back control of northern Mali from Islamists. Operation Serval was replaced by anti-insurgent Operation Barkhane.

The Takuba task force is a French-led European military operation of about 800 troops that was deployed in 2020. There are around 2,400 French troops currently in Mali.

Tensions between the French and Malian governments have been rising for months. France has accused Mali of working with Russian mercenaries, and Mali expelled the French ambassador in January after France’s foreign minister called Mali’s government “illegitimate.”

Mali suffered military coups in 2020 and 2021 and has been suspended from the African Union.

The Malian Government has been seeking to restore stability following a series of setbacks since early 2012, including a failed military coup d’état, renewed fighting between Government forces and Tuareg rebels, and the seizure of its northern territory by radical extremists.

The Special Representative also briefed the Council on the current stand-off between the Economic Community of West African States (ECOWAS) and the Malian transitional leadership, controlled by the military.

Over the weekend, ECOWAS held an Extraordinary Summit and decided that the proposed timetable for the transition, lasting up to five and a half years, was “totally unacceptable”.

Urging Malian authorities to focus on a speedy return to constitutional order, they decided to uphold individual sanctions put in place on 12 December and imposed additional ones.

The new sanctions include the recall of ambassadors from Bamako, the closing of land and air borders, suspension of all commercial and financial transactions (with some exemptions), and the suspension of financial assistance, among others.

Mali reciprocated by recalling its ambassadors and closing its borders with ECOWAS Member States.

In an address to the nation on Monday evening, however, Transition President, Colonel Assimi Goita, called for unity and calm, stating that Mali remains open to dialogue.

Mr. Wane explained that supporting the transition is a key aspect of the MINUSMA mandate, so the mission will try to find a consensual way out to overcome the impasse.

“A protracted impasse will make it much harder to find a consensual way out, while increasing hardship for the population and further weakening state capacity”, he argued, warning that such scenario would “have far-reaching consequences for Mali and its neighbours.”

Beyond the political transition, Mr. Wane believes it is also crucial that the Council continues to pay attention to the implementation of the peace agreement and to stability in the Centre of the divided nation, calling it two “building blocks” for a peaceful and stable Mali.

Following the end of the UK’s deployment to the UN peacekeeping operation in South Sudan, the National Security Council agreed to deploy a UK Task Group to support the UN mission in Mali. Their role will be to conduct long-range reconnaissance patrols to gather intelligence to help the UN better understand how to help the people of Mali.

This operation is separate from the deployment of three Chinook helicopters by the Royal Air Force in support of French operations.

The Light Dragoons and the Royal Anglians form the basis of the new task group comprising soldiers from across defence with a wide array of skills, from bomb disposal experts to drone operators and a state-of-the-art medical team.

In December 2020 the Task Group deployed to Gao as the first rotation of soldiers to take part in the UN mission.

Previous The Rise and Fall of Honduran President Juan Hernández as he is arrested and shackled
Next Roosevelt meets with King Abdul Aziz: U.S. builds the Dhahran Airfield