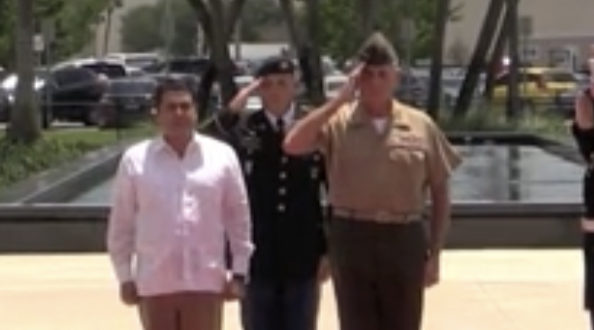 Merkley, who serves on the U.S. Senate Foreign Relations Committee, has led the charge for the U.S. to take tougher stances against corruption and impunity at the highest levels of the Honduran government

Oregon’s U.S. Senator Jeff Merkley—a member of the U.S. Senate Foreign Relations Committee and of the Subcommittee on the Western Hemisphere, Transnational Crime, Democracy, and Human Rights—released the following statement after the U.S. formally sought the arrest and extradition of former Honduran President Juan Orlando Hernández:

“This extradition request is a long-overdue signal that the U.S. is seeking a fresh and more constructive pathway for U.S.-Honduran relations, one that prioritizes the fight against corruption and impunity and respect for the rule of law.

“It was completely unacceptable that the U.S. government was supporting former President Hernández despite his extensive ties to narco-trafficking, including an alleged pattern of using campaign funds and taxpayer resources to protect and facilitate drug shipments to the United States. The U.S. should be working with credible partners in the region, not providing cover to anti-democratic leaders who are personally entrenched in corruption.

“I am pleased that since the introduction of my Honduras Human Rights and Anti-Corruption Act (S. 388) last February, the Biden administration has taken steps to recalibrate this relationship by establishing the fight against corruption as a core national security interest, targeting Juan Orlando Hernández for sanctions last July, building on the momentum of Honduras’s democratic elections in November, prioritizing relationships with civil society partners, and now with this extradition request. We still have much work ahead of us to combat corruption and impunity in Honduras and to help support the rule of law and inclusive economic development that Hondurans deserve, but today’s news is an important milestone in that effort.”

2022. The United States was seeking extradition of the president of Honduras, Juan Orlando Hernandez. Three weeks after he left office, he was arrested.

Police raided his home, took him into custody shackled at the wrists and ankles, and wearing a bulletproof jacket. As he was driven away in a police vehicle, a police helicopter waiting nearby took flight and appeared to be escorting the caravan, AP. Via PBS

The FBI for years has been rounding up the high level Drug Lords of Honduras, with President Hernandez, his brother Tony and other officials implicated.

2021: “Juan Manuel Avila Meza conspired to transport large shipments of cocaine into, within, and out of Honduras, including shipments bound for the U.S.  He provided sensitive law enforcement information to members of the Cachiros to enable their trafficking operations, and he brokered meetings with other corrupt officials to facilitate money laundering and cocaine trafficking.  Juan Manuel Avila Meza tarnished the badge he wore by protecting drug traffickers rather than those he took an oath to protect and serve.”

Between at least approximately 2004 and 2014, AVILA MEZA worked with members of a drug trafficking organization known as the Cachiros, which was a prolific and violent criminal syndicate that relied on connections to politicians, military personnel, and law enforcement to transport cocaine to, within, and from Honduras.  During that time, and while AVILA MEZA was purportedly enforcing the law as a police officer and, later, an attorney, AVILA MEZA participated in the Cachiros’ criminal enterprise by engaging in drug trafficking, money laundering, sanctions evasion, and debt collection.

In February 2014, AVILA MEZA helped set up and attended a meeting between one of the leaders of the Cachiros and Juan Antonio Hernández Alvarado, a/k/a “Tony Hernández,” another convicted major drug trafficker who is the brother of current Honduran president Juan Orlando Hernández, to discuss money laundering transactions between a Cachiros front company and the Honduran government.  In June 2014, AVILA MEZA met with six other members of the Honduran National Police, Fabio Lobo Sosa, the now-convicted son of Porfirio Lobo Sosa, the Honduran president who preceded Juan Orlando Hernández, and two DEA confidential sources purporting to be members of the Sinaloa Cartel.  During the meeting, AVILA MEZA led a discussion of how best to rely on the Honduran National Police to secure safe passage for a large cocaine shipment.

Six other former members of the Honduran National Police, including, among others, Victor Oswaldo Lopez Flores, Ludwig Criss Zelaya Romero, Carlos Jose Zavala Velasquez, and Carlos Alberto Valladares Garcia, were convicted in this case of firearms and/or drug trafficking offenses for conspiring to import cocaine into the United States.  Each of those individuals has pled guilty in federal court, along with co-conspirator Fabio Lobo.  On September 5, 2017, Lobo was sentenced to 24 years in prison; on February 6, 2018, Flores was sentenced to five years in prison; on June 27, 2018, Velasquez was sentenced to 12 years in prison; and on September 27, 2018, Garcia was sentenced to 14 years in prison.  Zelaya Romero is awaiting sentencing by Judge Schofield.  On October 18, 2019, Hernández Alvarado was convicted at a trial before the Honorable P. Kevin Castel of cocaine importation, weapons, and false statements offenses, and he is scheduled to be sentenced by Judge Castel tomorrow.

2018  “ Honduran congressman Tony Hernandez was involved in all stages of the trafficking through Honduras of multi-ton loads of cocaine that were destined for the U.S.  Hernandez allegedly arranged machinegun-toting security for cocaine shipments, bribed law enforcement officials for sensitive information to protect drug shipments, and solicited large bribes from major drug traffickers.

As alleged in the Superseding Indictment unsealed in federal court:[1]

From at least in or about 2004, up to and including in or about 2016, multiple drug-trafficking organizations in Honduras and elsewhere worked together, and with support from certain prominent public and private individuals, including Honduran politicians and law enforcement officials, to receive multi-ton loads of cocaine sent to Honduras from, among other places, Colombia via air and maritime routes, and to transport the drugs westward in Honduras toward the border with Guatemala and eventually to the United States.  For protection from official interference, and in order to facilitate the safe passage through Honduras of multi-hundred-kilogram loads of cocaine, drug traffickers paid bribes to public officials, including certain members of the National Congress of Honduras.

Hernández Participated in the Importation of At Least 185,000 Kilograms of Cocaine; Secured Millions of Dollars in Bribes to Honduran Officials; Used Heavily Armed Security Including Members of the Honduran Military and National Police.

South com has been active in giving aid to Honduras.