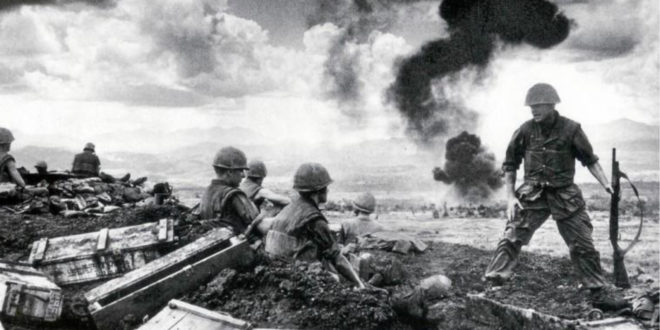 The Siege of Khe Sanh

The Siege of Khe Sanh All reporting DOD, Marines.mil
During the Vietnam War, US Marines established a base just 14 miles south of the DMZ near the village of Khe Sanh. In early 1968, Khe Sanh combat base was pushed to the forefront of world-wide attention as its roughly 6000 defenders were attacked by 3 North Vietnamese Army regiments (about 20,000 soldiers). During the 77 day long siege, the Marines found themselves cut off and desperately outnumbered.

One of the first engagements of the conflict took place on Hill 861, one of several small outposts surrounding Khe Sanh. Shortly after midnight on January 20th, NVA hit the hill with mortar, rocket and machine gun attacks, followed by an attack by around 300 infantry. As Kilo Company (3/26) Marines fought against overwhelming numbers, enemy soldiers infiltrated inside the defensive perimeter and close-range fighting ensued. Around 0200 the command bunker in the neighboring Hill 881 received a frantic call for help from First Lieutenant Jerry Saulsberry.

“We’re being overrun! Command group is all down!” Major Matthew Caulfield, battalion Operations Officer got on the radio to calm the panicked First Lieutenant. “A Marine unit doesn’t get overrun. Now calm down and tell me what is really happening,” the major calmly said. After learning that much of Kilo company leadership had been hit, Major Caulfield replied, “Now Jerry, I know you can do this. I want you to take that ball and run with it.”

After receiving this emotional support and guidance, 1st Lieutenant Saulsberry and what was left of Kilo Company held their ground and the tide of the battle turned as American artillery and air support joined the fight, repelling the invaders.

This became a theme throughout the siege of Khe Sanh. Again and again, the enemy would try to overwhelm a position, but the almost-overwhelmed marines would call in support, which would decimate the enemy attack and push them back. Though the marines were often severely outnumbered, because they were so well connected to various support elements they were usually able to overpower the enemy.

During the Khe Sanh siege, the Marine Corps employed various new methods to ensure the infantry had the support they needed to face overwhelming odds. In addition to massive fire support from nearby artillery and deadly air support, the marines also benefited from Operation Niagara (a USAF campaign of close air support that dropped 14,223 tons of bombs on the enemy in the vicinity of Khe Sanh), and Operation Igloo White (a joint electronic warfare operation in which special sensors were dropped throughout the area in order to identify NVA troop movements).

Marines also created a “super gaggle” method of providing supplies and support to areas that were cut off from traditional supply routes, which coordinated air and artillery strikes nearly simultaneous to resupply missions. The marines who were in the middle of such overwhelming odds at Khe Sanh were able to survive and prevail because they were so well integrated with other resources and support.

American involvement at Khe Sanh first began in 1962, when Army Special Forces units established a Civilian Irregular Defense Group to prevent North Vietnamese incursions across the Laotian border. Khe Sanh resides in the northwestern corner of the Quảng Trị Province along Route 9, amid the peaks of the rugged Annamite Range covered in triple canopy foliage. Route 9 runs from Laos, through the town of Lang Vei and intersects with the Ho Chi Minh Trail – the North Vietnamese Army (NVA) supply line to its troops and to communist Viet Cong (VC) guerrillas in South Vietnam – at multiple points.

In 1966, U.S. Marines built up the Khe Sanh Combat Base (KSCB) adjacent to the Army camp. Discussions on the importance of Khe Sanh have revolved around the suggestion the NVA were looking for a victory reminiscent of the 1954 battle of Dien Bien Phu, where the last vestiges of French colonialism were dealt a blow by the Vietminh, or that that Khe Sanh was a strategic ploy to divert U.S. troops and material to the fringes of the country in preparation for the Tet Offensive in 1968.

Major American involvement at Khe Sanh can be broken into four operations. The first, Operation Scotland, took place between November 1, 1967 and March 31, 1968. General Westmoreland, Commander, U.S. Military Assistance Command, Vietnam (COMUSMACV) sent the 26th Marines to reinforce the KSCB, bringing the total number of troops to around 6,000. The Marines stockpiled ammunition and refurbished the airstrip at the base, all in preparation to counter a possible NVA attack to seize South Vietnam’s northernmost regions and put themselves in a stronger position prior to any future peace negotiations. On April 14, a joint U.S. Air Force, Navy and Marine Corps air campaign codenamed Operation Niagara was launched in support of the Marines manning the base. Operation Niagara called for sensors to be installed along the nearby Demilitarized Zone (DMZ), reconnaissance flights to pinpoint targets, 24,000 tactical fighter-bomber sorties and 2,700 B-52 strategic bomber sorties.

What has become known as the Siege of Khe Sanh began on January 20-21, when the NVA launched a series of coordinated attacks against American positions. The NVA 6th Battalion, 2nd Regiment, 325C Division attacked the Marines on Hill 861, while the NVA 7th Battalion, 66th Regiment, 304th Division, attacked the Huong Hoa District headquarters in Khe Sanh Village. The fight was intense. Defenders involved in the attack included the South Vietnamese militia as well as U.S. Army advisers and Marines attached to a Combined Action Company platoon at the KSCB. Those forces were pinned down and escaped with the assistance of Niagara operations and airlifts by the 1st Air Cavalry (Cav) Division.

Casualty numbers remain elusive concerning Khe Sanh. The Battle of Khe Sanh took place between January 21 and July 9, 1968; however, most of the official statistics provided pertain only to Operation Scotland, which ended on March 31, or to the 77-day period beginning what is classified as the Siege of Khe Sanh, where the 26th Marines were pinned down until Operations Niagara, and Pegasus freed them from NVA artillery and infantry attack. Ray Stubbe, a Navy chaplain, has done extensive research on the battle and estimated U.S. casualties for Khe Sanh from the beginning of Operation Scotland to the withdrawal from the base at near 1,000, and enemy casualties at roughly 5,500. The DPAA and its predecessor organizations have conducted 28 Joint Field Activities in South Vietnam to recover the remaining 1,252 missing personnel still missing in Vietnam. Those activities involve field investigations, excavations, conducting oral history interviews with Vietnamese veterans, and work with the Ministry of National Defense archives to locate missing Americans.