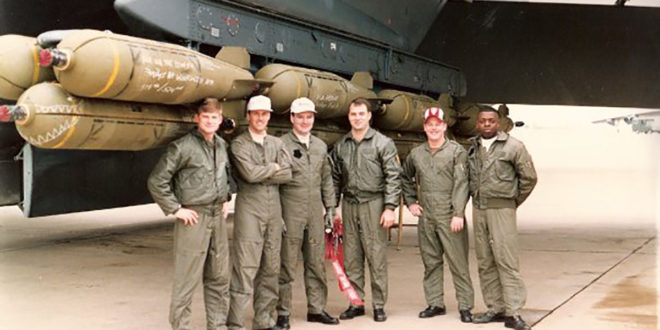 Aircrew from Sortie 1 of Operation Secret Surprise pose for a photo at Barksdale Air Force Base, Louisiana in this undated photo. More than 57 Airmen and seven B-52 Stratofortress took part in the historic mission, better known as Secret Squirrel. (courtesy photo)

Operation Senior Surprise (Secret Squirrel) began the bombing campaign against Iraq during the Gulf War in 1991. It kicked off Operation Desert Storm and the liberation of Kuwait.

A look back at Desert Storm, 31 years later

WASHINGTON (AFNS) —  Thirty on years ago, the Air Force participated in Operation Desert Storm, the largest air campaign since the conflict in Southeast Asia. The campaign’s purpose was to drive the Iraqi military out of Kuwait, release the country from Saddam Hussein’s invasion and reestablish its sovereignty.

On the morning of Aug. 2, 1990, Iraq invaded nearby Kuwait. In less than four hours, Iraqi forces occupied the capital, Kuwait City, and Hussein soon annexed the country as the 19th province of Iraq. The U.S. government initiated Operation Desert Shield in response.

“The real mission, the immediacy of that mission … was to deploy as many forces as possible to deter further aggressiveness by the Iraqi military and of course the Air Force was the first on the list, along with the Navy and the aircraft carriers, to deploy in the region,” said retired Lt. Gen. Bruce A. “Orville” Wright, a Desert Shield/Storm veteran. “It was a rapid deployment of forces from the continental United States (and some forces from Europe) to put enough airpower in place so the Iraqi military would be discouraged, if not deterred.

“We took out their eyes and ears, their control capability,” he continued. “The entire ground operations lasted about 100 hours and that’s a credit to the joint coalition airpower that was employed against the Iraqi military. We were all excited, that’s what we trained for our whole career. To take 24 F-16s and a squadron of very capable highly-trained pilots and maintenance professionals … and defeat what was then the largest ground force.”

The air campaign marked the initial phase of the war and for the Air Force, air superiority was the goal. With more than 68,800 total force Airmen being rapidly deployed in support of Desert Storm, there were approximately 69,406 sorties flown by 30 different types of aircraft.

“I remember thinking, ‘Saddam Hussein has no idea what’s coming,’ and after the first 60 minutes of the war, he will be largely disconnected from his tactical forces and he was. They tried to reconnect, but in many ways we began the decapitation of the leadership within the first 15 minutes of the war,” said Maj. Gen. Paul T. Johnson, an operational capability requirements director and Desert Shield veteran. “I really hope we can remember how we came together as a joint and a coalition team, nations from all over the world, all of the services supporting each other, generating effects for one another to achieve an effect in an incredibly short period of time.”

Desert Storm marked the first conflict in history to make comprehensive use of stealth and space systems support capabilities against a modern, integrated air defense, allowing the Air Force to succeed in their endeavor of air superiority.

“Over time I have come to understand the enabling capabilities that came to us from space, came to us out of stealth (and) that came to us out of new weapons and ammunitions that allowed us to do things in ways that we hadn’t done them before,” Johnson said. “Our ability to dynamically command and control across an entire theater there were things that, looking back now in hindsight, fundamentally began the transformation of airpower. There are so many things that we take for granted today … that saw their beginnings in Desert Storm.”

“That was the first time the investments, that had been made in some cases a decade or two decades earlier, came together on the battlefield and for the first time the world saw what the United States Air Force could do,” said Air Force Secretary Deborah Lee James. “Looking back and learning from Desert Storm, it is more important than ever before that we continue to modernize our force, gaining the advantage to defeat any adversary we may face in the future.”

On Feb. 28, 1991, following six weeks of air attacks and 100 hours of a ground campaign, President George H.W. Bush declared a cessation of operations and announced that Kuwait had been liberated.

The alert pad at Barksdale Air Force Base, Louisiana buzzed with activity in the early morning hours of Jan. 16, 1991, as seven B-52 Stratofortress from the 2nd Bomb Wing roared to life.  A few moments later they climbed into the gray sky, flying to Iraq to launch the opening bombardment for Operation Desert Storm.

Many of the 57 crew members who flew that historic mission were here to celebrate its 29th anniversary.  The mission’s official name was Operation Senior Surprise, but the participants nicknamed it Operation Secret Squirrel because of the mission’s confidential nature.

The group, unofficially dubbed the Secret Squirrels, has met every year since 2016 to commemorate the event.

Aaron Hattabaugh, one of the crew members, read a proclamation by U.S. Representative Adam Kinziger, recognizing the historical significance of the mission.

In remarks made from the floor of the U.S. House of Representatives and entered into the U.S. Congressional Record, Kinziger praised the efforts of the Airmen.

“Madam Speaker, those who served on this mission displayed true endurance and dedication to country in their actions,” he said.

Operation Senior Surprise was the B-52’s first participation in a major campaign since the Vietnam War.  The objective was to pave the way for successive air strikes by destroying the Iraqi military’s ability to communicate and generate power.

The mission employed the AGM-86C Conventional Air Launched Cruise Missile.  It was the first time the CALCM had been fired in combat, having been developed as a top-secret weapons system only a few years before.

More than fourteen hours after leaving Barksdale, the Secret Squirrels unleashed their precision-guided payload on targets in Iraq, destroying over 90 percent of their communication targets and effectively blinding the Iraqi military from seeing U.S. fighters following them.

The Secret Squirrels had reduced the fourth-largest military in the world to a stumbling giant, unable to defend itself.

“What you guys did was foundational and the enemy has been thinking about it ever since, because it was so effective,” he said. “You wrote the book on long range aviation and strike capability in the B-52.”

The trip back home was as harrowing as the ride in.  Two of the B-52’s suffered from engine problems and bad weather forced them to miss a carefully planned in-air refueling, nearly forcing them to land on runways in Europe not designed for the heavy jets.

Each problem was overcome and the Secret Squirrels touched back down at Barksdale AFB after being airborne for more than 36 hours, the longest B-52 mission at the time.

Warren Ward, the event organizer and a member of the crew that night, remembered well the difference between the flight to Iraq and the return flight.

“The whole way over I was scared to death, which was good because we were operating on about three hours of sleep,” he said. “On the way back, the adrenaline wore off and we still had 20 hours left to go.”

The entire mission was cloaked in secrecy before the first jet ever left the ground.  It remained that way for a year after the operation.  No one associated with the mission could speak about it outside a classified environment for a year afterward.

“We were proud to serve, proud to execute the mission and cherish the friendship of all 57 Secret Squirrel members,” he said.

Previous KING OF BATTLE: U.S. ARMY’S FIeld Artillery in Vietnam
Next Marines in the Siege of Khe Sanh January 20-21, 1968