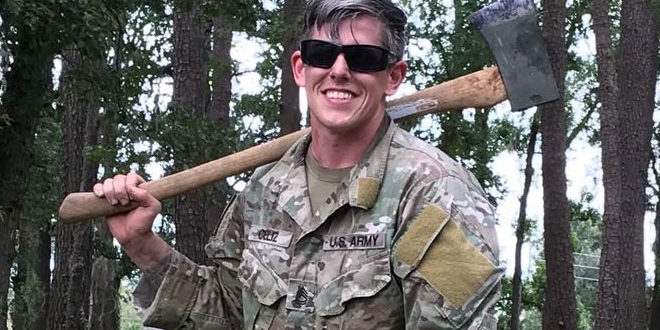 Sgt. 1st Class Christopher A. Celiz, was on his fifth deployment with the 1st Battalion, 75th Ranger Regiment, when he was killed. DOD, Photos Katie Celiz

A native of Summerville, South Carolina, Celiz enlisted in the United States Army in September 2006. He completed Basic Combat Training and Advanced Individual Training as a combat engineer (12B) at Fort Leonard Wood, Missouri.

Celiz was then assigned to the 530th Engineer Clearance Company, 92nd Engineer Battalion, 3rd Infantry Division, Fort Stewart, Georgia, where he served as a sapper squad leader and platoon sergeant.

In 2013, Celiz was selected to serve with the 75th Ranger Regiment and was assigned to Headquarters Company, 1st Battalion, 75th Ranger Regiment, Hunter Army Airfield, Georgia, where he served as the battalion master breacher and engineer. In March 2017, he was assigned to Company D, where he served as the mortar platoon sergeant.

Celiz is survived by his spouse, Katie Celiz, and their daughter.

Sgt. 1st Class Christopher Celiz poses for a photo with his daughter and dog, Jager, during a hike at Yonah Mountain, in the Chattahoochee-Oconee National Forest, Georgia, 2013. This was their first camping trip as a family. (Photo courtesy of Katie Celiz)

Sgt. 1st Class Christopher A. Celiz distinguished himself by acts of gallantry and intrepidity above and beyond the call of duty while engaging with the enemy in Paktia Province, Afghanistan, on July 12, 2018.

As the leader of a special operations unit comprised of partnered forces and members of the 1st Battalion, 75th Ranger Regiment, Celiz led an operation to clear an area of enemy forces and thereby disrupt future attacks against the government of the Islamic Republic of Afghanistan.

Shortly after his team reached their initial objective, a large enemy force attacked. The enemy placed effective fire on him and his team, preventing them from maneuvering to a counterattack. Realizing the danger to his team and the operation, Celiz voluntarily exposed himself to intense enemy machine-gun and small-arms fire.

Under fire, he retrieved and employed a heavy weapon system, thereby allowing U.S. and partnered forces to regain the initiative, maneuver to a secure location, and begin treating a critically wounded partnered force member.

“Courage, to me, is putting your life on the line to save the life of another, as demonstrated by Sfc. Chris Celiz who died protecting my crew.”

Captain Ben Krzeczowski, the pilot in command of the MEDEVAC mission

As the medical evacuation helicopter arrived, it was immediately engaged by accurate and sustained enemy fire. Knowing how critical it was to quickly load the wounded partner, Celiz willingly exposed himself again to heavy enemy fire so he could take charge to direct and lead the evacuation. As the casualty was moved from a position of cover, Celiz made a conscious effort to ensure his body acted as a physical shield to protect his team, the injured partner and the crew of the aircraft from enemy fire. After the wounded partner was loaded, Celiz’s team returned to cover, but he remained with the aircraft, returning a high volume of fire and constantly repositioning himself to act as a physical shield to the aircraft and its crew.

With his final reposition, Celiz placed himself directly between the cockpit and the enemy, ensuring the aircraft was able to depart. Upon the helicopter’s liftoff, Celiz was hit by enemy fire. Fully aware of his injury, but understanding the peril to the aircraft, Celiz motioned to the pilots to depart rather than remain to load him. His selfless actions saved the life of the evacuated partnered force member and almost certainly prevented further casualties among other members of his team and the aircrew. Celiz died as a result of his injuries. His extraordinary heroism and selflessness beyond the call of duty were in keeping with the highest traditions of military service and reflect great credit upon himself, his unit and the United States Army.

Throughout the entire engagement, Celiz significantly changed the course of the battle by repeatedly placing himself in extreme danger to protect his team and defeat the enemy.

Previous MOH for three U.S. Soldiers, two who died so others could live, another saved his men and survived
Next Glen A. Doherty, Tyrone S. Woods, former SEALS, CIA Contractors Killed in Benghazi Attack that has come back to haunt the evacuations