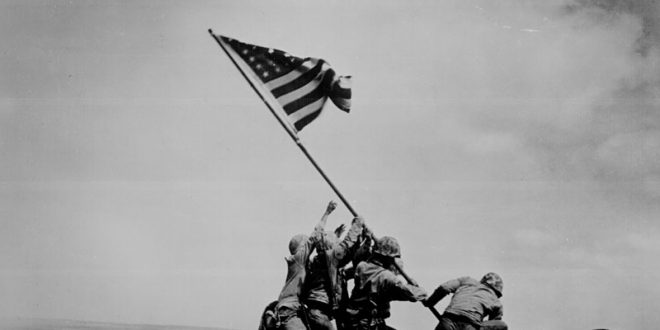 CORRECTION TO THE IDENTITY OF MARINES IN PHOTOGRAPH OF THE FLAG RAISING ON MOUNT SURIBACHI, IWO JIMA17 Oct 2019 USMC

New information has allowed the Marine Corps to expand on the historical background of the iconic photo of the second flag raising on Mount Suribachi, which captured the “uncommon valor” of all Marines who fought in the Battle of Iwo Jima.

The correct identification of Marines in Mr. Joe Rosenthal’s iconic photograph of the second flag raising on Mount Suribachi, Iwo Jima, Japan, is important. Following changes made in 2016 to the historical record of Rosenthal’s photograph, the Marine Corps continued to remain open to receiving new information that could provide further clarity. In July 2018, the Marine Corps was contacted by private historians who asserted that there was an error in identifying the Marines depicted in Rosenthal’s photo. These historians provided a significant amount of new evidence for consideration, mostly in the form of dozens of previously private photographs.

In order to ensure that its history was properly acknowledged and preserved, the Marine Corps formed a board, which considered the new evidence provided and sought the assistance of the Federal Bureau of Investigation (FBI) in assessing the contents of the photographs. The board deliberated on the claims that came from the presentation of new information.

Without the initiative and contributions of both private historians devoted to preservation of our history and the FBI’s support, the Marine Corps would not have this opportunity to expand on the historical record of the second flag raising on Mount Suribachi. We are extremely grateful for their dedication to helping us preserve our legacy.

As a result of the board’s evaluation of the information provided, the Marine Corps accepted the change in the identification of the Marines pictured in the photograph as
necessary in the historical documentation of Rosenthal’s photograph. The names
associated with pictured individuals is the only change resulting from this board.

Regardless of who was in the photograph, each and every Marine who set foot on Iwo
Jima, or supported the effort from the sea and air around the island is, and always will
be, a part of our Corps’ cherished history. In the words of General David H. Berger,
Commandant of the Marine Corps, “they are all heroes.”

Private First Class Gagnon played a significant role in the flag raising on Mount
Suribachi and his role will never be diminished. He was directly responsible for getting
the larger second flag to the top and returning the first flag for safe keeping. Without his
efforts, this historical event might not have been captured, let alone even occurred.

The Marine Corps honors the “uncommon valor” that is the hallmark of all Marines who
fought in the historic battle of Iwo Jima in World War II. We also honor the sacrifice of
every Sailor, Soldier and Coast Guardsman who served there and the courage of their
former adversaries. Iwo Jima is one of the few places on Earth that is the site of such a
ferocious battle where former adversaries now come together as allies to remember and
honor those whose sacrifices ultimately laid the foundation for peace and prosperity.