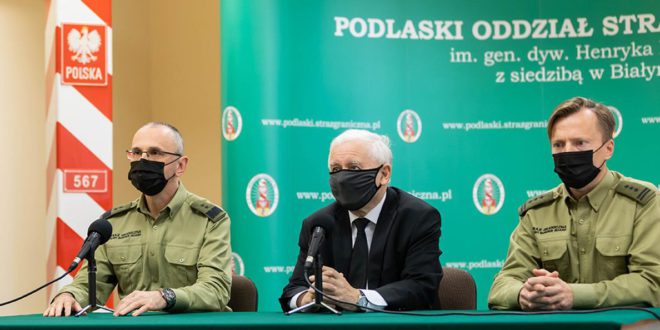 Polish soldiers, together with the Polish Border Guard officers, ensure the security of the border Poland MOD Report The situation on the Polish-Belarusian border is tense. It is related to a hybrid attack on our country and the European Union. But appropriate actions have been taken by the Polish Border Guard and the Polish Army. The fence is being built. (…)Our goal is to ensure that what is the target of the hybrid attack: breaking the Polish border, leading to a migration crisis – does not happen. Thanks to the service of the Border Guard, thanks to the service of the soldiers of the Polish Army, Poland is safe, “said Mariusz Błaszczak, the Minister of National Defense after the briefing in Warsaw

We have decided to build a permanent barrier along the Polish-Belarusian border. The experience of other countries affected by the migrant crisis shows that this is the only effective method’, said Deputy Prime Minister Jarosław Kaczyński. On Thursday (7 October), an away meeting of the National Security and Defence Affairs Committee was held, which focussed on the situation on the Polish-Belarusian border. SEE FULL mOD release below:

The U.S. and Russian presidents have publicly stepped into the debate over the mounting crisis on the Poland-Belarus border, where military movements and the discovery of a body overnight have highlighted the dangers as thousands of third-country migrants shelter in freezing conditions on the Belarusian side hoping to cross into the European Union.

U.S. President Joe Biden expressed concern on November 12 about the situation, calling it “a great concern.”

Hours later, on November 13, Russian President Vladimir Putin insisted his country was not involved in the border crisis despite Western accusations and recent air patrols and military exercises along Belarus’s western border with the EU.

And a Belarusian report said strongman Alyaksandr Lukashenka, who the European Union blames for “weaponizing migrants” to spark the crisis, has ordered food tents and aid to be sent to migrant children at the makeshift encampments.

Biden’s remarks came hours after Vice President Kamala Harris voiced similar concerns during a visit to France, where she said she discussed the issue with President Emmanuel Macron.

Belarus “is engaged in very troubling activity. It is something that I discussed with President Macron, and the eyes of the world and its leaders are watching what is happening there,” she told a news conference.

EU leaders have accused Minsk of “hybrid warfare” tactics, saying it has lured migrants from war-torn and impoverished countries in the Middle East and Africa and then pushed them toward the border.

EU officials say Minsk’s policies are retaliation for sanctions that Brussels has imposed on Lukashenka’s regime over its violent crackdown on dissent after he claimed victory in last year’s election, widely seen as rigged.

They have signaled their intention to impose additional sanctions as soon as next week.

Belarus denies that it is doing so. It says it cannot help resolve the migration crisis unless Europe lifts sanctions that were imposed in response to the crackdown.

Some EU governments, including Poland, have accused Moscow of helping ally Lukashenka orchestrate the border crisis.

This week, Russia launched ongoing nuclear-capable bomber patrols over Belarus and surprise joint paratrooper exercises near Belarus’s western border, on top of political and diplomatic support it has offered Lukashenka since the highly criticized vote in August 2020.

Putin issued a statement on November 13 insisting that Moscow was not a party to the Belarus border problem while reiterating concerns about Russia’s regional security.

“I want everyone to know. We have nothing to with it,” Putin told state broadcaster Vesti in an interview.

He said he hoped German Chancellor Angela Merkel might speak with Lukashenka, since, as he put it, most of the migrants congregating in Belarus are seeking to travel to Germany.

The Russian president also suggested that NATO activities in the Black Sea region, tense since Russia annexed Crimea and Kremlin-backed separatists launched a conflict in 2014, were a security irritant.

Ukraine is wary of becoming a new flashpoint in the crisis and on November 12 said it would send some of its border guards and national guard officers to its border with Poland to share intelligence on the handling of the crisis.

“Ukraine supports Poland in this difficult time and hopes that it will be able to resolve the artificially inspired crisis in a peaceful and civilized way,” Ukrainian Interior Minister Denys Monastyskiy said, according to a statement.

Belarus’s Defense Ministry said on November 12 that it was holding joint paratrooper exercises with Russia near the Polish border. Moscow called the drills part of a “surprise combat-readiness check.”

Russia later reported that two of its paratroopers had died about 10 kilometers from the Polish border in a fall amid gusty wind conditions during those exercises.

Belarus also said on November 12 that it had sent some 2,000 migrants back to their countries and had revoked the right of 30 tourist firms to invite migrants into Belarus.

Several airlines said on November 12 that they’ll limit access to flights between Turkey and Minsk to stem the flow of migrants from the Middle East.

Polish police said on November 13 that the body of a Syrian man had been found the previous day near the Belarusian border.

It was at least the 11th reported migrant death on or near the border since the crisis began.

“Yesterday, in the woods, near the border, near Wolka Terechowska, the body of a young Syrian man was found,” local police said on Twitter. They said they were unable to make an “unequivocal determination of the cause of death.”

A number of previous deaths have been blamed on exhaustion or exposure, and temperatures in the region have plummeted in recent weeks.

Belarusian news agency BelTa reported on November 13 that Lukashenka — whose embattled regime has been accused of propagandizing the migrants’ plights — had ordered food tents be set up in the border region and said a priority should be given to children.

A significant proportion of migrants heading through Belarus to the EU are Iraqis. The Iraqi Foreign Ministry on November 12 announced the withdrawal of the work permit of the Belarusian consul in Baghdad and said the Iraqi embassies in Moscow and Warsaw were coordinating efforts for the voluntary return of Iraqis stranded on the border.

The Foreign Ministry also said Iraq had stopped direct flights between Iraq and Belarus, according to a statement quoted by the Iraqi News Agency.

Polish soldiers, together with the Polish Border Guard officers, ensure the security of the border

On August, the  31st, at the Ministry of National Defense,  President of Poland Andrzej Duda, Minister Mariusz Błaszczak and the commanders of the Polish Army held a briefing on current issues concerning state security, including the situation on the Polish-Belarusian border, the situation in Afghanistan and the Zapad 2021 maneuvers.

The head of the Ministry of National Defense recalled that due to the situation on the Polish-Belarusian border, the Polish Border Guard is supported by around 2,000 soldiers every day. As he noted, the soldiers of the Polish Army are experienced and prepared to guard the security of our homeland. One of the tasks executed today by the military on the Polish-Belarusian border is the construction of a fence. At the moment, it has been built on a length of 12.5 km.

– Thank you Minister Mariusz Błaszczak, I also thank Minister Mariusz Kamiński for mobilizing the state services properly, starting with the Border Guard, through the army, which supports the activities of the Border Guard and helps guard the Polish border today. All attempts to attack people who serve there are simply an irresponsible action, I repeat once again – an anti-Polish action, trying to destroy the security of the Republic of Poland – said President A. Duda after the briefing.

The president also thanked the soldiers who took part in the evacuation of Poles and Afghan citizens from Kabul in recent days. – I want to thank our soldiers and diplomats who carried out this evacuation in an extremely efficient and responsible manner. I would like to thank everyone who commanded this action – added the president.

The head of the Polish Armed Forces also informed after the briefing that, in consultation with the Minister of National Defense, in the near future he will extend the term of office as the Operational Commander of the Armed Forces, Lieutenant General. T. Piotrowski.

A barrier will be built along the Polish-Belarusian border

‘We have decided to build a permanent barrier along the Polish-Belarusian border. The experience of other countries affected by the migrant crisis shows that this is the only effective method’, said Deputy Prime Minister Jarosław Kaczyński. On Thursday (7 October), an away meeting of the National Security and Defence Affairs Committee was held, which focussed on the situation on the Polish-Belarusian border.

The Deputy Prime Minister and Chairman of the National Security and Defence Affairs Committee stressed that Poland was not facing immigration pressure from refugees. ‘It is economic immigrants who are coming. They are brought as part of an operation organised by the Belarusian authorities with the clear consent of the Russian Federation. The Belarusian security agencies completely tolerate it and are present there’, Jarosław Kaczyński noted.

The Deputy Prime Minister pointed out that the actions of the Belarusian party are a cynical and brutal operation directed by President Lukashenko. ‘This operation was planned as a retaliation for supporting the Belarusian opposition and an attempt to put pressure on the EU’, he said.

‘In Belarus, there is a one-kilometer-wide border zone that is heavily guarded and inaccessible to ordinary Belarusian citizens. The fact that these migrants are allowed in it is proof of the actions of the Belarusian authorities’, pointed out the chairman of the National Security and Defence Affairs Committee.

Deputy Prime Minister Jarosław Kaczyński also spoke about specific actions of the Belarusian party. ‘These people are led to places where they will have a chance to cross the border. Sometimes Belarusian officers personally participate in crossing the barriers and cutting the wires’, said the Deputy Prime Minister.

The Chairman of the National Security and Defence Affairs Committee also reported that during the meeting of the Committee, the construction of a barrier on the Polish-Belarusian border was discussed. ‘We also discussed the decisions already made, including in the financial sphere, to build a very serious barrier. The kind of barrier that is very difficult to break through. The European experience, the experience of a number of countries, e.g., Hungary and Greece, shows that this is the only effective method’, he emphasised.

Major General Tomasz Praga, the Commander in Chief of the Border Guard, thanked Border Guard officers for their commitment. He emphasised that they perform their duties in an exemplary manner.

Colonel Andrzej Jakubaszek, Commander of the Podlasie Unit of the Border Guard, pointed out that when we protect the Polish border we also protect the border of the European Union.