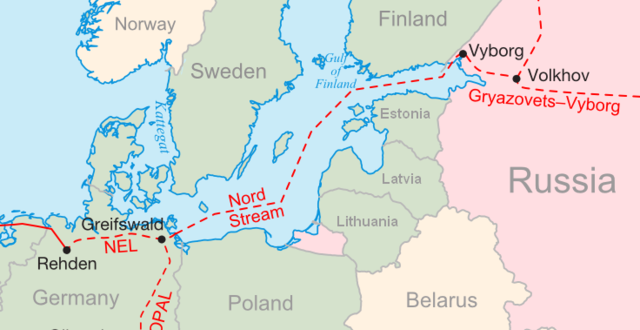 The two Nord Stream pipelines in the Baltic Sea were the result of sabotage, Denmark’s Prime Minister Mette Frederiksen said.

“It is now the clear assessment by authorities that these are deliberate actions. It was not an accident,” Frederiksen said when speaking to journalists. “There is no information yet to indicate who may be behind this action.”

“There are three leaks, and therefore it is difficult to imagine that it could be accidental,” said Danish Prime Minister Mette Frederiksen on Tuesday.

“We see clearly that this is an act of sabotage — an act which likely means a further step of escalation of the situation in Ukraine,” concurred Polish Prime Minister Mateusz Morawiecki.

The seismograph recorded near-silence until 0003 GMT (2am local time) when there was a spike followed by a continuous hissing waveform. The pattern repeated itself at 1700.

Frederkisen and Morawiecki spoke in Gloeniow in Poland at the opening ceremony for Baltic Pipe, part of a Polish plan to reduce its energy dependence on Russia. The line will connect Poland to Norwegian gas fields through Denmark.

“We have established a report and the crime classification is gross sabotage,” the Swedish national police said Tuesday, announcing a preliminary investigation into possible sabotage of the Nord Stream 1 pipeline.

“No option can be ruled out right now,” said Kremlin spokesman Dmitry Peskov, regarding the possibility of sabotage, adding that the leaks are a cause for concern.

Nord Stream 1 has been, until recently, a major source of gas for Germany. Nord Stream 2 has yet to go into commercial operation.

“The destruction that occurred on the same day simultaneously on three strings of the offshore gas pipelines of the Nord Stream system is unprecedented,” said NordStream AG in a statement. “It is not yet possible to estimate the timing of the restoration of the gas transport infrastructure.”

According to a statement from the Danish armed services, which included photographs of the leaks off the island of Bornholm, “The biggest leak is spreading bubbles a good kilometer in diameter. The smallest is creating a circle about 200 meters” in diameter.

“There was a spike and then regular noise. We cannot say if that could be gas streaming out,” said Josef Zens, a spokesman for the German geological research center GFZ.

“The leaks are more likely a message: Russia is opening a new front on its energy war against Europe. First, it weaponized gas supply, halting shipments, including via the Nord Stream pipeline. Now, it may be attacking the energy infrastructure it once used to ship its energy,” said Blas, author of The World for Sale: Money, Power and the Traders Who Barter the Earth’s Resources.

Amid much speculation on social media about who might have sabotaged Nord Stream, there is no credible evidence of a likely culprit or motive. Analysts and amateurs on Twitter contend the Russians may have deployed divers or unmanned submersible vehicles to poke holes in the pipelines.

The leaks are a result of a “terrorist attack” and “an act of aggression” against the European Union, declared Mykhailo Podolyak, an adviser to the Ukrainian presidential office.

Some anonymous accounts on Twitter declared the U.S. president had ordered an attack, circulating a video clip of Joe Biden from early February vowing to “bring an end” to the Nord Stream 2 project if Russia invaded Ukraine.

“I’m not going to speculate on the cause at this time and I know our European partners are investigating. We stand ready to provide support to their efforts,” a White House National Security Council spokesperson told VOA on Tuesday. “This just drives home the importance of our efforts to work together to get alternative gas supplies to Europe and to support efforts to reduce gas consumption and accelerate true energy independence by moving to a clean energy economy.”

The Kremlin has stated that if Western Europe wants Russian gas it should end sanctions against Moscow imposed following Russia’s invasion of Ukraine seven months ago.

While the impact to Europe ahead of the winter as a result of the loss of the pipelines remains to be seen, the trio of leaks poses an immediate hazard to wildlife and maritime navigation.