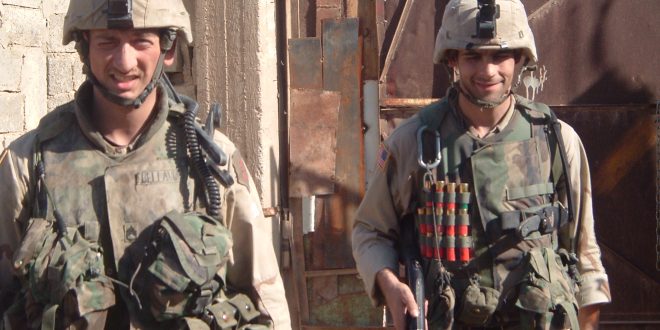 November, 2004 – Into the hot zone at the Second Battle of Fallujah

November, 2004 – Into the hot zone at the Second Battle of Fallujah

Staff Sgt. David Bellavia was bleary eyed. He had been awake nearly 48 hours, denied sleep by a cacophony of sporadic gunfire aimed at him and his platoon as they made their way through the streets of Fallujah, Iraq. He had already seen his sergeant major, company commander and executive officer cut down by enemy fire, forcing him to assume command of A Company, Task Force 2-2, 1st Infantry Division.

Now he was feet away from the front door of a house along an abandoned block in the city of 350,000. His Soldiers had searched nine houses along the street looking for six to eight insurgents that intelligence reports suggested were in the area. It was Nov. 10, 2004, Bellavia’s 29th birthday. What he unwrapped upon opening the doors to that 10th house would etch his name into history as a recipient of the Silver Star, the nation’s third highest decoration for valor in combat.

“I have had better birthdays, for sure,” Bellavia told the Military Channel in 2009.

Bellavia’s men were mired in the opening stages of the Second Battle of Fallujah. Also known as Operation Phantom Fury, the operation was a joint effort by American, Iraqi and British forces to drive out the Iraqi insurgency in the city. It began Nov. 7, 2004, and ended more than six weeks later on Dec. 23. The effort was led by the U.S. Marine Corps and was the bloodiest battle of the Iraq war.

The impetus for the battle began in March when four American private military contractors from Blackwater USA were ambushed and killed in Fallujah. U.S. Marine forces launched Operation Vigilant Resolve to take the city back from insurgents. The operation ended in late April with the formation of the Fallujah Brigade, a unit composed of Iraqis, which was charged with keeping insurgents out of the city. But insurgent strength did not wane. On Sept. 24, 2004, a senior U.S. official told ABC News that catching Abu Musab al-Zarqawi, who was said to be operating in the city, was “the highest priority.”

The insurgents holding Fallujah were formidable. They had interpreters, combat cameramen and were well-trained. But Bellavia’s unit was battle-hardened, too. By the time they arrived on the city’s outskirts, the 1st ID had been in Iraq for 10 months and had been involved in every major battle in the war up to that point. The pair of hard-nosed contingents clashed immediately when the door of that 10th house opened.

“They just opened up on us with belt-fed machine guns,” Bellavia said.

The insurgents were entrenched in a makeshift pillbox under a set of stairs. Bellavia seethed when he heard the anguished screams of his fellow Soldiers as they were wounded.

“I wanted that revenge. I wanted to be that leader that I promised I would be,” he said. “A light switch went off.”

According to his Silver Star citation, Bellavia, armed with an M249 Squad Automatic Weapon gun, entered the room where the insurgents were holed up and sprayed it with gunfire, forcing the enemy to take cover and allowing the squad to move into the street. While the Americans took fire from various vantage points inside the house, Bellavia called in a Bradley Fighting Vehicle to shell the houses.

During a lull in the fire, Bellavia approached the house again and observed an insurgent loading a rocket-propelled grenade launcher. Bellavia promptly shot him and charged into the house. A second insurgent fired at him, and Bellavia wounded him in the shoulder. When he entered a bedroom, the wounded insurgent followed, forcing Bellavia to shoot him. When another insurgent began firing from a floor above, Bellavia returned fire and killed him. A fourth insurgent then emerged from a closet in the bedroom, yelling and firing his weapon as he leaped over a bed trying to reach Bellavia. The insurgent tripped and Bellavia wounded him. Bellavia chased the insurgent as he ran upstairs.

He followed the wounded insurgent’s bloody footprints to a room on the landing and threw in a fragmentation grenade. Upon entering the room, Bellavia discovered it was filled with propane tanks and plastic explosives. He did not fire his weapon for fear of setting off an explosion and instead engaged in hand-to-hand combat with the insurgent, fatally stabbing him in the neck.

At this point, five members of the platoon entered the house and took control of the first floor. Before they could go room by room clearing the structure, however, they were ordered to move out of the area because close air support had been called in by a nearby unit.

“It was survivability,” he said. “This is what we were destined to do. In the moment that’s very much rational.”

Bellavia left the service after six years in 2005 as a staff sergeant. He co-founded Vets for Freedom and served as vice chairman. He attended the 2006 State of the Union address as an honored guest. He currently is president of EMPact America, an American energy resiliency organization based in Elma, New York. He is married and has three children.

In 2007, he published a memoir, “House to House: An Epic Memoir of War,” co-written with John R. Bruning. In September 2010, the book was selected as one of the top five best Iraq War memoirs by journalist Thomas Ricks (author of “Fiasco”). In 2012, Bellavia signed an agreement with 2012 Oscar-winning producer Rich Middlemas to make his memoir into a major motion picture. Along with the Silver Star, Bellavia also was awarded the Bronze Star, three Army Commendation Medals, two Army Achievement Medals and the New York State Conspicuous Service Cross. He was also nominated for the Medal of Honor.

Most of the fighting in the Second Battle of Fallujah subsided by Nov. 13. U.S. Marines continued to face isolated resistance from insurgents hidden throughout the city. By Nov. 16, after nine days of fighting, the Marine command described the action as mopping up pockets of resistance. Sporadic fighting continued until Dec. 23. By late January 2005, news reports indicated U.S. combat units were leaving the area, and were assisting the local population in returning to the now heavily-damaged city.