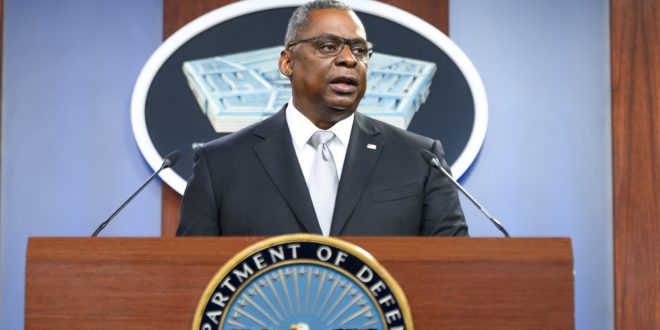 U.S. Defense Secretary Lloyd Austin used his first conversation with Russian Defense Minister Sergei Shoigu since the start of the Russia’s all-out invasion of Ukraine to call for an immediate cease-fire there, the Pentagon has said.

“Secretary Austin urged an immediate cease-fire in Ukraine and emphasized the importance of maintaining lines of communication,” the U.S. Defense Department said in a statement on May 13.

The Pentagon provided no other details of Austin and Shoigu’s first direct talks since February 18, nearly a week before tens of thousands of Russian troops poured across the Russian and Belarusian borders into Ukraine.

The invasion has been met with fierce and surprisingly effective Ukrainian defenses supported by Western military shipments and funding, and sparked unprecedented trade, financial, and diplomatic sanctions against Russia as well as Western girding of areas that border Russia.

The Pentagon and U.K. military briefers have said they believe the Russian military planners wildly overestimated possible local sympathy for Moscow and that the invaders’ military aims are weeks behind schedule.

Russian officials have hinted at a campaign to control major eastern and southern swaths of Ukraine and possibly try to seize Ukraine’s entire Black Sea coast.

Previous Ukraine Hunts for ‘Russian War Criminals, Politicians, and Propagandistsiv’: It’s in the Cards
Next Russian Troops Withdraw From Kharkiv