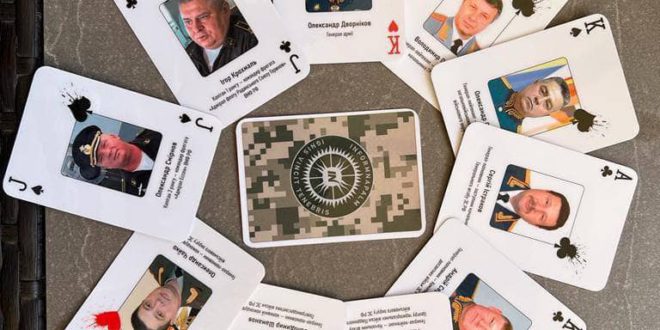 Ukraine Hunts for ‘Russian War Criminals, Politicians, and Propagandistsiv’: It’s in the Cards

In the grand tradition of wartime playing cards with a purpose, the Ukrainian Ministry of Defence has issued a couple decks that feature a who’s who of Russians it wants to capture.

The ministry released “two decks of cards with the faces of Russian war criminals, politicians and propagandistsív,” officials said.

“Maps with Russian war criminals were released with the support of the military leadership of Ukraine, including the Commander-in-Chief of the Armed Forces Valery Zaluzhny,” officials said.

The creators got the idea from friends in the U.S. Department of Defense.

“This idea in 2002 was first implemented in the United States,” the ministry said. “Playing such cards, the U.S. military remembered their targets – wanted war criminals.”

The U.S. Army in World War II also issued playing cards, including a deck of aircraft silhouettes to help soldiers on the ground identify friends from foes.