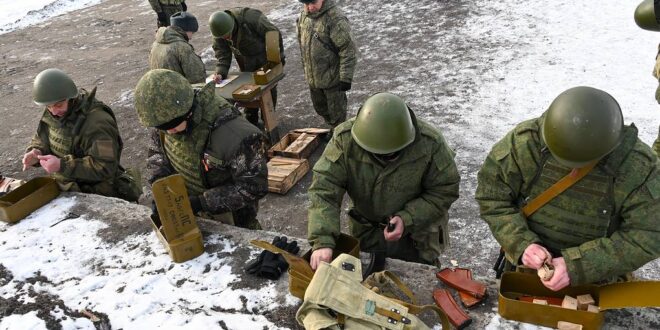 Chechen strongman Ramzan Kadyrov, who has both mocked and praised the Russian war effort against Ukraine, says he has sent fighters to bolster the front line forces there.

About 300 fighters of the Special Purpose Mobile Unit (OMON) from Chechnya have been deployed to “the zone of the special military operation,” Kadyrov wrote on his Telegram channel on Saturday.

“Today, to help their brothers on the frontline, about 300 OMON Akhmat-1 fighters of the National Guard directorate for the Chechen Republic have been deployed from Grozny International Airport named after Hero of Russia Akhmad-Khadzhi Kadyrov,” he wrote.

Kadyrov noted that since the onset of the so-called “special military operation,” the fighters from Chechnya have displayed “high combat capabilities and efficiency in implementing their tasks,” according to the Russian state news agency, Tass.

The Chechen strongman previously said that he would send his three teenage sons – aged 14, 15, and 16 – to fight in Ukraine.

“The grandsons of the first president of the Chechen Republic, the Hero of Russia Akhmat-Khadzhi Kadyrov, Akhmat, Eli and Adam are aged 16, 15 and 14 respectively, but their military training began long ago, almost in childhood,” Kadyrov wrote on Telegram. “It is not enough just to know how to shoot… Akhmat, Eli and Adam are ready to use their skills in the zone of the special military operation, and I’m not kidding,” Kadyrov wrote.

“It’s time they show their worth in real combat, and I can only welcome their wish. Soon, they will leave for the front, for the most difficult sections of the line of contact,” Kadyrov said.

The three sons studied basic theory, and were taught to handle various weapons, he said.

“I have always believed that the main goal of any father is to cultivate in his sons the fear of God and teach them to defend their family, people and homeland,” Kadyrov wrote. “If you want peace, prepare for war.”

In recent months, Kadyrov has emerged as a putative “frenemy” to the Kremlin, both bolstering and denouncing Putin’s approach to the war. Kadyrov in October criticized the withdrawal of Russian troops from Lyman, and said that Russia’s commander of the Central Military District was “mediocre.”