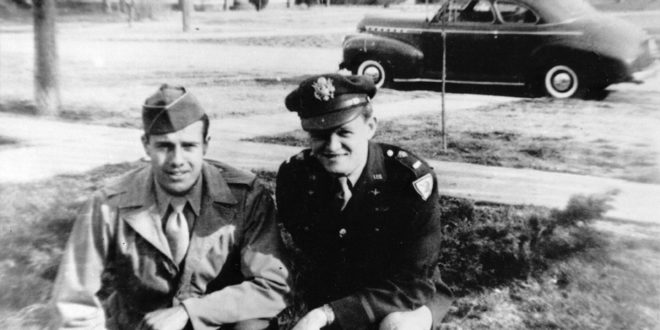 Bob Dole, who was severely wounded in World War II by German gunfire, was honorably promoted to colonel

As a platoon leader in the famed 10th Mountain Division, 21-year-old Bob Dole was gravely wounded on a hill in the Italian mountains just two weeks before the end of the war.

Trying to pull his radioman to safety while battling a fortified German position, Dole was hit by enemy fire in his right shoulder and back. Over the next three years, not expected to survive, he lapsed in and out of consciousness, lost a kidney, lost the use of his right arm, and most of the feeling in his left arm. But he willed himself to live. BobDole website

“As a platoon leader in the famed 10th Mountain Division, 21-year-old Bob Dole was gravely wounded on a hill in the Italian mountains just two weeks before the end of the war. Trying to pull his radioman to safety while battling a fortified German position, Dole was hit by enemy fire in his right shoulder and back. Over the next three years, not expected to survive, he lapsed in and out of consciousness, lost a kidney, lost the use of his right arm, and most of the feeling in his left arm. But he willed himself to live.” Harper Collin’s Description of One Soldier’s Story, by Bob Dole

Senator Bob Dole’s lifetime of public service began with his enlistment in the United States Army during World War II.

After training for nearly ninety days at from Fort Benning, Senator Dole left for Europe from Fort Meade in Maryland. Dole served mostly in Italy as a 2nd Lieutenant with the 10th Mountain Division. Senator Dole served under a group of experienced superiors, and cites in his oral history interview that it was these friendships formed during his service which helped build trust and alleviate intimidation. One individual specifically mentioned is Frank Carafa who rescued Senator Dole from danger after he was hit by a German.  Senator Dole also recalls being marked with an “M” on his forehead— with his own blood—by a fellow GI to signify to the medics who later found him that he had already received one dose of morphine. Senator Dole was shot in the shoulder, suffered from spinal cord bruising, and lost a kidney. He was hospitalized for over a year.

Longtime politician Bob Dole, who was severely wounded in World War II by German gunfire, was honorably promoted to colonel Thursday in a private ceremony at the WWII Memorial.

Dole, 95, served as a captain in the 10th Mountain Division before pursuing a political career that included nearly 30 years as a U.S. senator for Kansas and the Republican presidential nominee in 1996.

Surrounded by the memorial’s pillars and arches, Army Chief of Staff Gen. Mark A. Milley promoted Dole in front of a crowd of Dole’s friends and family and other Army leaders.

In its 244-year history, Milley noted, the Army has only honorably promoted three former officers. First, George Washington was promoted to general of the Armies, and then Lt. William Clark of the Lewis and Clark Expedition was promoted to captain.

Dole is the only living recipient of such an Army promotion.

“I’ve had a great life and this is sort of icing on the cake. It’s not that I have to be a colonel; I was happy being a captain and it pays the same,” Dole said, jokingly.

While a student at the University of Kansas, a 19-year-old Dole volunteered for the Army Enlisted Reserve Corps in 1942. Six months later, he was called up to active duty and commissioned as a second lieutenant in 1944.

He later deployed to Europe where he served as a platoon leader fighting against Nazi Germans in the hills of Italy.

On April 14, 1945, Dole’s company launched an attack, but a stone wall and a field of land mines trapped them in an exposed area, according to an excerpt on his 1996 presidential campaign website.

As a German sniper began to fire on his unit, Dole selected a group of Soldiers to go with him to take out the sniper when his radioman was hit.

Dole, now on his stomach, pulled the wounded Soldier across the battlefield into a foxhole. Seconds later, an enemy shell exploded, ripping into his right shoulder, shattering his collarbone and part of his spine while leaving his arm dangling.

“I lay face down in the dirt,” Dole said in the excerpt. “I could not see or move my arms. I thought they were missing.”

At first, Dole was paralyzed from the neck down and the Army sent him to a military hospital in Kansas so he could die near his home. Sensation slowly returned to his legs and left arm, but then he caught a fever of almost 109 degrees.

To save his life, doctors performed an emergency kidney operation.

“His war was over against the Nazis, but his fight was really just beginning,” Milley said.

It took nearly three years and nine operations for Dole to recover from his wounds, which left him without the use of his right arm and limited feeling in his left arm. He improvised ways to strengthen his arms, and even learned to write left-handed, according to the website.

Dole earned two Purple Heart medals and two Bronze Stars with valor and, in 1947, he was medically discharged from the Army as a captain.

“As we know, he persevered and healed and he went on to distinguish himself in the service of his country many, many times over in both the House of Representatives and the Senate,” Milley said.

Some of Dole’s legislative legacies, the general noted, include passing laws that made it easier for families to access food stamps, improvements to the Social Security program, extending the Voting Rights Act, and passing the Americans with Disabilities Act.

In April, President Donald Trump signed legislation to authorize Dole’s promotion after Army leadership was asked to review his service record and contributions to the nation’s defense.

Dole was also awarded the Congressional Gold Medal in January 2018 for his service to the nation as a “soldier, legislator and statesman.”

“Thank you all for being who you are and what you stand for,” Dole told the crowd, “and that you love America and you’re willing to fight for America, regardless of the consequences.”

Senator Dole served in the Army from 1942 until 1948, receiving the Purple Heart and a Bronze Star for his service, in addition to the American Campaign Medal, European-African-Middle Eastern Campaign Medal, and the WWII Victory Medal and the Combat Infantryman Badge (CIB). Senator Dole recounts his WWII experience in this oral history interview, but also goes into much more detail in his 2005 autobiography One Soldier’s Story: A Memoir. In the book,
Bob Dole tells the moving, inspirational story of his harrowing experiences in World War II, and how he overcame life-threatening injuries long before rising to the top of the U.S. Senate.
Share