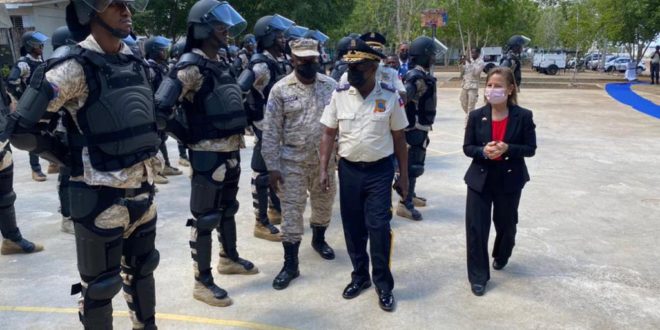 Released! 12 U.S. missionaries, including children, kidnapped by a gang in Haiti 16 Oct

Twelve Christian Aid Ministries missionaries held captive by a Haitian gang since October 16 have been released.

Gary Desrosiers, spokesperson for Haiti’s National Police, PNH, confirmed the news in a conversation with VOA Creole. He declined to provide any details.

The violent gang kidnapped 17 missionaries, 16 Americans and one Canadian, on October 16 as they were on their way to visit an orphanage outside the capital, Port-au-Prince. Those held captive included children.

The gang leader demanded a $1 million ransom per person for their release. He threatened to kill the missionaries if his demands were not met.

It is unclear whether a ransom was paid.

The United States sent FBI agents and other law enforcement officials to Haiti to help with efforts to free the hostages.

Jacquelin Belizaire and Jorge Agobian contributed to the story.

A group of 17 U.S. missionaries, including children, has been kidnapped by a gang in Haiti, according to a voice message sent by a religious group that was aware of the incident.

The Christian Aid Ministries, based in the midwestern state of Ohio, sent a message to other missions, saying that the 17 were helping build an orphanage and had left the site when they were abducted.

“This is a special prayer alert,” the one-minute message said. “Pray that the gang members would come to repentance.”

The message said that the mission’s field director and his family and one other unidentified man stayed at the ministry’s base while everyone else visiting the orphanage was kidnapped. The field director alerted U.S. officials.

A U.S. government spokesperson said officials were aware of the reports of the kidnapping. “The welfare and safety of U.S. citizens abroad is one of the highest priorities of the Department of State,” the spokesperson said, while declining further comment.

Haiti has a long history of gang-related kidnappings, but the number had diminished after President Jovenel Moïse was assassinated at his private residence on July 7, and following a 7.2-magnitude earthquake that struck southwest Haiti in August and killed more than 2,200 people.

The abductions, now, have increased, with gangs demanding ransoms ranging from a few hundred dollars to more than $1 million, authorities say.

A deacon was killed in front of a church in the capital of Port-au-Prince last month and his wife kidnapped, one of dozens of people who have been abducted in recent months.

Haiti’s National Police report that at least 328 people were kidnapped in the first eight months of 2021, compared with a total of 234 for all of 2020

The United Nations Integrated Office in Haiti said in a report, “Political turmoil, the surge in gang violence, deteriorating socioeconomic conditions – including food insecurity and malnutrition – all contribute to the worsening of the humanitarian situation.”

Information in this report came from the Associated Press and Reuters.