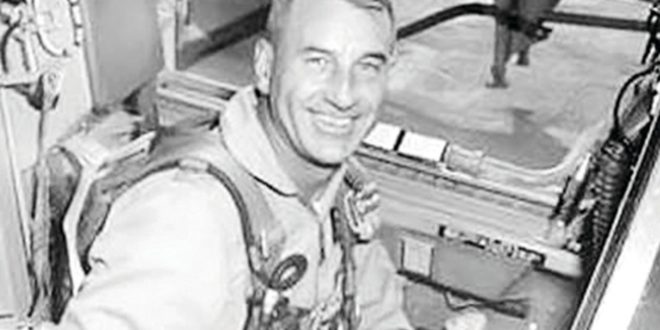 An MSNBC reporter may have never been noticed, but now his inappropriate over the Wokey Culture top has Americans wondering.

He wants to delink Santa from NORAD tracking and from the military:

“No, I’d prefer we end the tradition because it’s about time that we decoupled St. Nick from the world’s most powerful military. American culture is saturated with a desire to associate the military with the saccharine. ……. military jets flying over NFL games give us an injection of jingoist testosterone before more regionally focused battles of testosterone are played on the field; and we get the Netflix movie “Operation Christmas Drop,”a seasonally themed rom-com that cheerfully seeks to boost approval for America’s military base in Guam…..” Read the rest of the insipid feature by MSNBC Opinion Columnist

Every December, millions of families around the world track Santa’s Yuletide journey through the North American Aerospace Defense Command’s Santa Tracker. “NORAD Tracks Santa” is a holiday tradition that started from humble origins — and as a fluke — but has now grown into a massive volunteer operation.

Kids across the U.S. have grown accustomed to following Santa’s journey by tracking his flight path online or by making a good, ol’-fashioned phone call to find out where he is. They’re also able to play games and watch videos of his progress through the mobile “NORAD Tracks Santa” app.

They can do all this thanks to the hard-working folks at NORAD, who start the task of tracking Santa each November when NORADSanta.org starts getting inquiries from families. About 70 contributors help set up the site, apps and phone lines, while more than 500 uniformed personnel, Defense Department civilians, their families and supporters volunteer time on Christmas Eve to answer children’s questions on Santa’s whereabouts. While COVID-19 has reduced volunteers at traditional call centers, virtual call center capabilities will be able to pick up any slack.

Since NORAD is the protector of the skies over North America during the rest of the year, it’s specially equipped for this mission.

“Twenty-four hours a day, 365 days a year, NORAD defends North America by tracking airplanes, missiles, space launches and anything else that flies in or around the North American continent,” said Air Force Gen. Glen D. VanHerck, NORAD’s commander. “As we have since 1955, this December 24th we are once again ready for our no-fail mission of tracking Santa.”

NORAD’s powerful radar system, called the North Warning System, has 47 installations across Alaska and northern Canada. As soon as that radar system picks up on Santa departing from the North Pole, NORAD tracks him via globally-integrated satellites using their infrared sensors. Normally, those sensors allow NORAD to see heat from launched rockets or missiles. As Santa flies around the world, satellites track his position by detecting Rudolph’s nose, which gives off an infrared signature similar to that of a missile.

NORAD also tracks Santa using U.S. Air Force F-15, F-16, F-22 and Canadian Air Force CF-18 fighter jets. On Christmas Eve, fighter pilots rendezvous with Santa off the coast of Newfoundland to welcome him to North America. They escort him safely through North American airspace until he returns to the North Pole.

The operation has become a well-oiled machine over the years, but it wasn’t always easy. In fact, the whole thing started by accident.

How the Tradition Began

Back in 1955, the folks at the previously named Continental Air Defense Command Operations Center in Colorado were working a typical night shift when Air Force Col. Harry Shoup got a phone call from a child in Colorado Springs, Colorado. The boy had followed the directions in a department store’s newspaper advertisement that told children how to call Santa — except the number had been printed incorrectly and instead called the operations center.

Shoup could have been a Scrooge about the whole thing, but he wasn’t. He entertained the boy’s call as well as the rest of the calls that came through due to the misprinted number. Throughout the night, Shoup and his operators answered calls, kicking off a new tradition.

The role of tracking the big guy rolled over to NORAD when it was formed in 1958, and it’s been getting more popular and more technologically-savvy ever since. Aside from calling in to talk, kids can now use social media and a mobile app to follow St. Nick. Virtual assistant Amazon Alexa and vehicle navigation service OnStar are also helping to track him, and the website NORADSanta.org offers a countdown clock, games and videos that are available in several languages.

The tracking of Santa is a holiday tradition around the world. In 2020, NORADSanta.org received more than 11 million visitors from 200+ countries and territories; call center volunteers answered more than 20,000 calls; Amazon Alexa was accessed more than 12.3 million times; and OnStar received about 12,400 requests to locate Santa. The @noradsanta Facebook page currently has 1.89 million followers, more than 206,000 follow along at @noradsanta on Twitter, and about 14,400 people follow @NoradTracksSanta_Official on Instagram.

The call center opens at 6 a.m. EST on Dec. 24. Kids can call 1-877-Hi-NORAD (446-6723) to find out where Santa is or use the above website, mobile app or social media. But officials warned that Santa only comes if children are asleep, so make sure they get into bed early so he doesn’t miss delivering to their house.