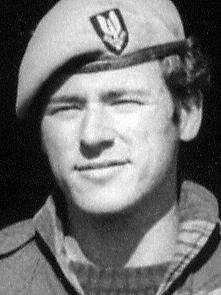 By Henri Lepetit for SOF

Four years after Rhodesia was handed over to that homicidal maniac Mugabe through notoriously farcical elections, I found myself whiling away the time in Durban Natal, South Africa.

It ought to be remembered that a large portion of the hapless – and, contemptibly irrelevant to the UK govt. interests- Zimbabwe population was to be sacrificed.  Jimmy Carter, in keeping with his ideals and Maggie -Dame-Thatcher, pandering to her lobbyists sold them down the river.

‘C’ Squadron SAS had ceased to exist when Rhodesia became Zimbabwe and the troops disbanded. The ‘Plinth’ -a monolith of black granite bearing the names of the fallen- was moved for its safety from the parade square in the Kabrit barracks by the airport in Salisbury to a Durban cemetery in South Africa. (Recently and for the same reasons, it was again moved this time to Hereford, Wales, home of the Mother regiment).

Former members hoping to prolong the adventure threw their lot in with the South African Recces – a fatal move for some. More were content to give civilian life a go. Others still -like myself- edged on by restlessness- went on making use of a good CV by tracking various military related job prospects as these came and went contingent on the whims of sponsors weighing their return on investments.

We were soldiers looking for their fortunes.

One sunny Spring morning, looking to have some breakfast, I walked in the Press Cafe, a popular spot with the locals. Looking around for a table, I had a pleasant surprise when I caught sight of the familiar silhouette of Bob MacKenzie in the company of his girlfriend. When we last met, Bob -Major, Sir- was my Sqn CO.  To this day, MacKenzie was one the few men I have ever truly felt honored and fortunate to meet. He was at all times ready to show genuine concerns as to the personal well being of the troops under his command. In combat he displayed the brutal, ruthless and scrupulous efficiency of an elite soldier, the hallmarks of the All American Hero of a Hollywood war movie from the sixties.

I was greeted with a big welcoming smile. After the preliminaries and catching up since the old days, he mentioned having teamed up with two other former squadron officers to publish a book about the history of the Rhodesian SAS. The wife of one of them, a journalist, was doing the writing. Later when we met, she asked if I could contribute stories. When she heard that I still had a collection of photographs taken during the war, she pleaded to use them. Hard up for the Beira Op for which there was no document, I offered to do an illustration. Later she kindly presented me with an autographed copy of the book.

This is how the photo of myself -taken by Steve K. – came to be featured on the cover of the pictorial edition of B. Cole’s ‘The Elite’.

Another photograph taken moments later was used on the cover of the book, ‘A Handful of Hard Men’ (the guy on the top right).

The following account tells how these photos came about.

Both were shot during the pull back from a raid on a Frelimo -a. k. a ‘freds’- lair and main admin center in southern Mozambique fifty miles from the border. The town of Mapai was a launch pad for thousands of terrorists who contrived their infiltrations to rampage, loot and rape their way throughout Rhodesia, courtesy of the logistical support provided by the USSR, their sponsors.

Towards the end of August ’79, the guys and I were on r&r ‘in town’ having braais , meeting girls in discos, and in all making the most of those carefree moments when word was received to return without delay to Kabrit.

The Squadron fell in for a pre-briefing in an electrically charged atmosphere, everyone anticipating the announcements of a ‘big one’. This was confirmed as the details were being revealed.

In a joyful general approval Combined Operations had finally decided to deal with this part of ‘Porkos’. Also nicknamed the ‘Russian Front’ for the ubiquitous Warsaw Pact advisers , odd Cubans and North Koreans seen crawling all over the place. A raid was to be launched to take out Mapai, once and for all . The assault forces would consist of a little over three hundred security forces backed by what all the Air Force could muster. An important military campaign by Rhodesian standards stretching resources by concentrating on a single objective.

The operation was code named ‘Uric’ (always wondered how that name came about. . . ).

When proclaimed as being ‘on’ large Ops never fail to produce a boost of high spirits to the moral. The guys are given a chance to even scores and vent pent up resentment at being time and again mauled by an invariably superior enemy. A buzz for action made even more acute upon learning the ‘freds’ would be at the receiving end.

To make sense of the eagerness some explanations on the Squadron SOP may be in order.

The typical Rhodesian SAS operating member assigned to a job packs his H frame bergen with the usual necessaries; landmines, claymores, mortar bombs, RPG’s with rockets and boosters, the odd 75 recoiless rifle -with tripod-its rounds, M962’s to spare, TR48 or -if lucky- A76 radio sets, drip, ammos, night visions, water to stretch, a bit of food -to stretch even more- a piece of parachute canopy for sleeping bag, camo cream plus the odd gimmicks when Ops happen to be ‘funnies’. His personal weapon an AK, RPD, a hand gun and -for the occasional sniping mission-a heavy barreled 303 Enfield bolt action rifle mounted with a telescope. And hundreds and hundreds of matching ammos.

Fully loaded, he is then secretly deployed. Routinely heli-para-halo-scuba-boat-truck dropped as part of a four man callsign -can be six or even eight depending – deep, often very deep inside enemy countries. He sets off for weeks at a time on a prismatic compass march to cover dozens and dozens of miles of hilly, dry, bushy, parched country to set up OP’s, pick up intelligence, lay ambushes, mines, hit selected objectives, capture or eliminate prominent targets while simultaneously having to contend with a teeming African wild life red in tooth and claw.

Inherently the consequences of a successful task or an inadvertent compromise has the callsign, by virtue of its nature, exposed to the reaction of an enemy numerically vastly superior, out gunning and irrationally bent on revenge. Large-scale manhunts are set in motion a scenario made even more irritating when Migs and T’s enter the fray. Extraction was a rarely practical option.

Still, it is worth mentioning no matter how tight a corner, a callsign finds itself in the enemy breathing down its neck on the run. It never passes a chance to create more mayhem along the way, If only to lighten the bergen.

But with the freds it is always personal, the blurry distinction between them and the terrorists having long been cleared up.

Within hours of Op ‘Uric’ general briefing, tons of ammos and combat gear had been loaded onto the trucks. Urged on by the weather and security concerns, we were well on our way south by the time the cloud of dust kicked up by our convoy passing full speed through the barracks gates had settled.

For the long drive, Dave Berry and I took turn at the wheel of a 4, 5 heading down to Mabalauta, in better days a popular lodge for big games in the Gonarezhou National Park close to the Mozambique border. Directly across was Malvernia, a town with a bad name for its sporadic pin prick mortar and rockets attacks. While I was in the RLI on externals, we invested much time elaborating appropriate responses with the use of adapted tactical harassments.

In the end as always, the artillery was called to unleash an apocalyptic barrage on the little town.

To little avail, all went quiet for a few days and the mortaring resumed as if nothing had ever happened. This went on for years.

While driving Dave -a Sergeant- and I discussed with eager anticipation the up coming operation, picturing ourselves enjoying a beer in the town after it had been taken.

We made a couple of stops at WVS -roadsides run by local associations of lady volunteers who kindly offer tea and scones to the troops traveling through their town. Late that evening we reached the base camp and crashed for the rest of the night under a bright canopy of stars.

At dawn, we kitted up and we choppered the first leg out to the forward operating base over the endless progression of pinkish pale dry cracked barren landscape dabbed at interval with circular islands of greyish scrubs which In the rainy season was thousands of square miles of wet swamp.

The entire assault force had been assembled in the middle of one of those islands, from above an impressive sight. It reflected the importance of the operation and to us added to the exhilarating sense of unusual material superiority. The Pumas -SA330, bearing South African Air Force markings- were neatly parked in rows . Piles of 44-gallon avgas drums were stored at different places.

The troops were bevvying up in the jesse bush where shade could be found.

On the ground at eye level the camouflage was as good as could be managed with the presence of such a large force nearly undetectable. Nearly.

At dawn, a patrol of freds had been observed in the distance. For some reason they suddenly changed course and began heading directly to the assembly area.

For years these groups had been responsible for giving us a hard time.

Warning orders were passed and a defensive line of about thirty rifles and machine guns was formed.

Hardly anyone could believe the luck at being presented with such an opportunity. Talking score settling, suppressed giggles may have been heard.

When the fred patrol was about two hundred feet away, it fanned out in a line facing the bush. The leader began a tirade -in Portuguese- convinced he had trapped one of our small callsign. Satisfied with a long monologue of verbal abuse, he then called for an immediate surrender. Considering he had given enough time for reaction, he instructed his men to open up.

From the bushes exploded a single shot from thirty barrels. When the dust eventually cleared, twenty two bodies lay scattered on the ground.

Our presence had been compromised more rapidly than it would have been with the Soviet satellites alone. Organized counter reaction now a short time in coming.

The magnitude of Op ‘Uric’ called for the assistance from the SAAF. Here I ought to spare a thought of profound gratitude for the unwavering support it never failed to provide. Their pilots were some of the best ever to fly helicopters in combat.

RLI troops and Engineers had also been brought in to beef up the Squadron assault strength.

To ensure success prior to the assault, troops and jets had for three days been blowing up bridges further north, cutting off the access roads to Mapai. Stop groups were positioned to destroy exfiltrations.

Mid-morning after final group photos, each callsign boards its allocated Puma, trying at best to arrange itself with a bulky gear and baked by an early hard sun.

The operation is under way. NEXT PART II   HERE IS LINK TO PURCHASE THE BOOK

Previous THE ULTIMATE SWAT SIDEARM
Next The Stanleyville Massacre