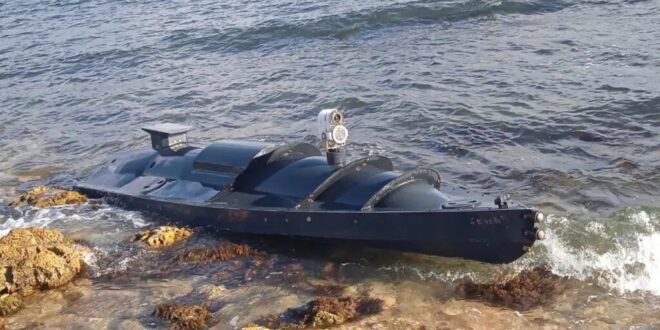 This vessel reportedly washed up in Crimea on Saturday.

Closed circuit camera broadcasts from Sevastopol have been blocked in the wake of explosions at the Russian naval base there, a Russian official said.

“All broadcasts from CCTV cameras in Sevastopol that were previously available to civilians will be closed,” according to Mikhail Razvozhaev, the governor of Sevastopol. His remarks were reported in TASS, the Russian state-owned news agency.

Razvozhaev made his comments after widespread images surfaced online Saturday morning, depicting a strike on the Russian base. Many Black Sea Fleet ships were reported destroyed. The ships are based in Russia-occupied Crimea.

The attack was launched by the Armed Forces of Ukraine, using drones.

“Today we witnessed the most massive attack by UAVs and remote-controlled surface drones in the waters of the Sevastopol Bay in the history” of the war on Ukraine, Razvozhaev said.

The attack seemed to catch Moscow by surprise, amid repeated blows to the Russian war effort.

“Today at 04:20 am, the Kiev regime carried out a terrorist attack on ships of the Black Sea Fleet and civilian ships,” the Russian Ministry of Defense told reporters on Saturday.

Despite the ban on CCTV footage, many images depicting the attack emerged online.

Russian officials did not explain why the CCTV footage would be blocked, nor when it would resume.