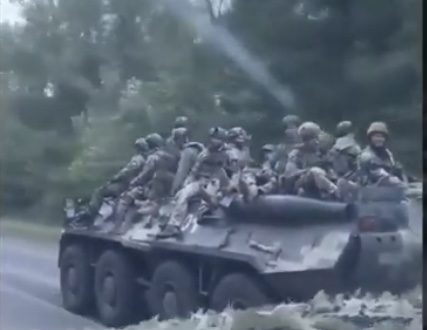 Russia has likely ordered the withdrawal of its troops from the whole of the Kharkiv Oblast, according to the British Ministry of Defence.

In an update on Twitter, the MOD said pockets of Russian resistance remained in Kharkiv, west of the Oskil River, but Ukraine has “recaptured territory at least twice the size of Greater London” since early September.

Russia also is struggling to bring enough reserves to the front line in the south of Ukraine near Kherson.

Reports are circulating that some Russian units defending the Kherson area are negotiating their surrender with Ukrainian counterparts, as they have either run out of supplies or are close to doing so.

The Ukrainian advances have raised concerns that Russia may strike back with weapons of mass destruction, such as chemical attacks or limited tactical nuclear weapons.

The MOD said Russia is finding it difficult to bring troops across the Dnipro River, with an improvised bridge Russian forces had started to build remaining incomplete.

The update added the bridge is now “probably” being hit so frequently by Ukrainian long-range artillery Russia cannot carry out repairs.

“Russia’s overall operational design” is likely to suffer “serious implications” as a result of the rapid Ukrainian successes in the south and east of the country, the MOD said.

The result is the majority of Russian forces prioritising “emergency defensive actions” and “the already limited trust deployed troops have in Russia’s senior military leadership is likely to deteriorate further.”

It comes after British Defence Intelligence described “significant gains in the Kharkiv region” in the east, over the past 24 hours.

Equally, Ukrainian President Volodymyr Zelensky has predicted that this winter would be a “turning point.”

He called for more military support from allies in the coming months, saying that more weapons would give his country the thrust it needed over the next 90 days to take back the regions occupied by Russian forces.

Reporting from British Ministry of Defence.

Previous As Ukraine Forces Advance, Next Few Weeks Will Be Critical
Next Former Green Beret and NFL Player Nate Boyer Talks to Soldier of Fortune About Directing His New Movie