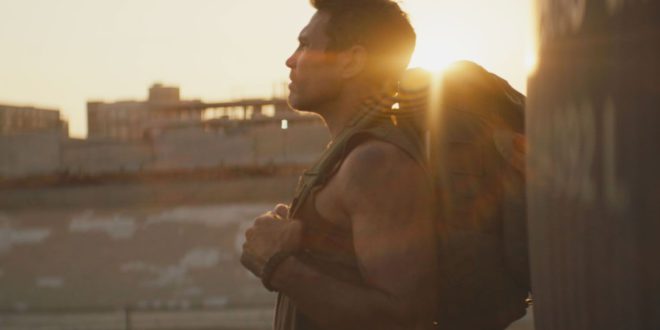 Nate Boyer in a scene from MVP.

Nate Boyer served six tours of duty as a Green Beret in Iraq and Afghanistan, and later became a long snapper for the Seattle Seahawks. But one of the hardest things he has done is making sure he does right by the people who are portrayed in his new movie, MVP.

“They’re telling their own stories, and I didn’t want to get them wrong or let them down,” first-time director Boyer told Soldier of Fortune. “That was the hardest part.”

Boyer’s movie premieres Sept. 14 in 35 cities nationwide, including cities that host NFL teams. The screenings go along with a Theatrical on Demand event to kick off a campaign to raise funds for the movie’s namesake organization, Merging Vets and Players.

The film depicts the true story of how the group was founded by Boyer and Fox Sports NFL Insider Jay Glazer. The group matches combat veterans with former professional athletes, and offers them a new team to help them make the transition to civilian life. The film features co-star Mo McCrae, and lists Sylvester Stallone as co-producer.

The plot unfolds on the streets of Hollywood, where a homeless veteran (Boyer) steps in to save a recently retired NFL player (McCrae) from scandal. The two men later reconnect, and find common ground in the shared experience of life after “glory days.” They both want purpose and identity – and struggle to find it out of uniform. The movie shows how MVP helps them and others like them find new missions in life.

“That is so important,” Boyer said. “The sense of belonging, of purpose.”

In the real life MVP group, Boyer said, veterans and former athletes connect naturally with one another. They meet each week at gym to work out. Afterwards, the group members hang out and talk about their lives.

“They have a lot in common,” Boyer said, and help one another find meaning.

When directing the movie, Boyer made sure every veteran character in the movie is played by an actual veteran. Much of the film crew also served in the military.

“I definitely want to make another movie,” he said.

Additional screenings of MVP will take place throughout fall 2022. Many screenings will include personal appearances by Nate Boyer, along with NFL players and local veterans. The GNC Live Well Foundation is the national sponsor of the theatrical campaign, and will support the film throughout the 2022-23 NFL season.

Check out the trailer, below.