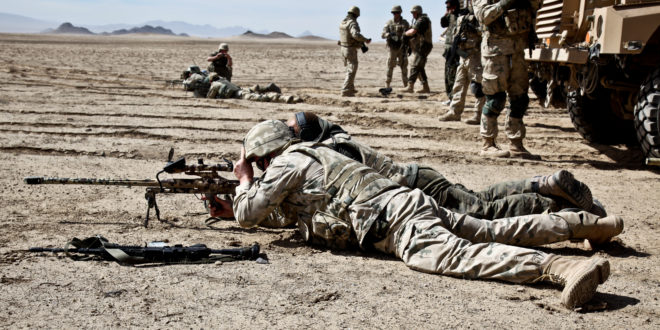 The Modern Sniper: On Targets and Technology

Today’s snipers look a lot different from the snipers of yesteryear. The fundamental traits are still intact: keen observation skills, mental acuity, physical fitness and sound understanding of marksmanship fundamentals. But the weapons, load bearing equipment and the tools they use to put first-round hits on targets have changed drastically.

One component that has really taken off is the augmenting of technology to increase the hit probability on targets of opportunity. In this line of business, putting rounds on target is our motto. A select few have helped us hammer in those nails more efficiently, to say the least. I reached out to Bryan Litz and Nick Vitalbo from Applied Ballistics and Nvisti to get their input on how snipers, and marksmen in general, can embrace technology to get more bang for their buck.

The most deadly weapon on the battlefield is the sniper himself; his capabilities as a shooter are what make him so deadly. However, long range target engagements require accurate ballistic solutions and the sniper needs to be able to take into account nearly a dozen variables to get a round on target. When you couple that with the stress of the situation and having to do a lot of mental math, it’s an extremely difficult job.

We look to help offload some of that stress by making intuitive tools that can be utilized easily and quickly through technology and electronics. However, the single most important component of this is that the tools need to be extremely reliable; otherwise there is little utility in it and technology can take away the sniper’s focus from the objective at hand.

In turn, as designers, the first thing that we need to be aware of is reliability and ease of use. If we’re successful at our job in developing such a tool, then there is great benefit to the sniper in embracing that tool. If you take, for instance, one of the ballistics calculators that we have, whether it be an app on a Smartphone, a dedicated ballistics computer on the weapon or another handheld device, utilizing a reliable tool can get you on target faster and more effectively. One such example is the IBEAM [integrated ballistic engine and mount] device, which we not only tested in user evaluations but was deployed as well. This device provides a quantifiable decrease of over 4x in engagement times when using the IBEAM coupled to a weapon-mounted laser rangefinder. Within half of a second of pressing the range button, the fire control solution is ready and presented to the sniper.

With this type of speed and reliability, we’re enhancing the sniper’s capability by allowing him to focus on the target and the situation, rather than doing the mental calculations necessary to engage a target. By embracing such technologies as tools and putting the sniper in the ultimate control of the situation, these tools can be used to increase speed and accuracy.

In our ballistics solvers and other tools, our greatest focus is on predictability – the ability to get that first round on target in any given situation. For years in the small arms community, people have viewed ballistics solvers and other tools as only predictive in nature. Given that most people have been using the G1 drag curve to model long-range bullets and not taking accurate measurements of the atmospheric or wind conditions, there is no wonder that this misconception has permeated the community.

This is something that we’ve directly addressed. First, by embedding our ballistics computer in the Kestrel weather meter, we’ve enabled extremely accurate sensor readings to be measured. Use of the device immediately increases the quality of the atmospheric inputs, beyond any other device out there. However, the largest increase in predictability comes from the usage of the custom drag curves. By using a custom drag curve, you’re using the most accurate model of the bullet in the ballistics engine – measured directly from time-of-flight information in the Applied Ballistics shooting laboratory.

We take careful measurement of the time-of-flight data from every bullet that we test; this allows us to directly measure the bullet’s drag as a function of its velocity – the equivalent to taking Doppler data for the bullet. By using this drag curve in the ballistics engine, it is no longer a predictive engine; the solver is performing an actual fly out of the bullet using data that has previously been measured directly by the AB team.

In sniper engagements, this has allowed for accurate fire control solutions at extreme long range. This increases the standoff range to the target and thus has created a great safety zone and an increase in probability of hit.

With respect to law enforcement, we’ve started applying weapon employment zone (WEZ) analysis more frequently for shots that must be taken within a few hundred meters. For those readers that are not as familiar with WEZ analysis, it is a statistical tool that allows you to look at all of your sources of uncertainty on any given shot. You can add up all of those uncertainties, like muzzle velocity deviation and weapon accuracy, and determine an outer bound of where your bullet will hit and the probability of hitting a certain size target.

In law enforcement, it’s extremely important that the probability of hit is 100 percent and that there is no potential for collateral loss of life. In this case, we’ve been approached to determine the maximum range at which LE snipers can be and still engage a target and guarantee a shot on target given an excellent shooter.

In a hostage situation where a shot must be taken, it’s vitally important that the sniper knows the capability of the weapon system and the environment. In this case, WEZ analysis is being used to determine just how safe it is to take a shot from a given distance.

When we teamed with Neilsen-Kellerman to develop the Applied Ballistics Kestrel Weather Meter, we agreed that we didn’t just want to create another ballistics computer – we wanted to create an entire ballistics platform. We did this with our military customers in mind and derived a lot of the requirements for the device directly from feedback that had been provided to us over the years. Many of these comments were focused on connectivity to other “smart” devices to maximize the effectiveness of the device.

We released a few graphics that show the power of combining devices. The first tools that we released allowed for us to upload weapon and ammo profiles to the device. The first major tools that we released were the AB Analytics package for Windows and the AB Kestrel Profile loader. The Analytics package allows you to perform analysis on your entire weapon system and perform WEZ analysis on it. You can then take the profile that you create and directly upload it to the Kestrel for use in the field via the profile loader. The profile loader launched with over 200 custom drag curves built into it and now we have over 300. In the Applied Ballistics laboratory, we’re continually shooting new bullets and collecting data to add more. As we mentioned earlier, this is just one of the things that allows you to achieve much greater accuracy and predictability.

The AB Analytics package is an extremely powerful tool that many of our high end users are using. We also wanted to support a free version of the software and added limited WEZ analysis and profile building to our web site as well. This has been well received and allows you to build a weapon/ammo profile and then copy it directly into the profile loader software and then upload onto your Applied Ballistics Kestrel device.

In Modern Advancements in Long Range Shooting, we published the details of an experiment that we performed using our wind sensor array (check out our web site for a description of the system). We utilized an anemometer at the firing location to measure the wind speed and direction and used this to predict the windage hold. We then compared where the bullet impacted the target compared to what the measurement at the firing position predicted.

Over large data sets, we found that when an anemometer at the firing position is used to determine the wind speed and direction, we could achieve nearly a 30 percent probability of hit using standard .308 military ammunition out to 1000 meters.

These experiments prompted us to build an additional tool called the Kestrel Companion that allows the Applied Ballistics Kestrel to be mounted in a rotating vane mount upon a tripod; the fire control solution can be remotely viewed on an Android phone or tablet.

Now, when you look at the full suite of tools, you immediately start to see how utilizing such items can increase your accuracy. First, by building a weapon/ammo profile using the custom drag curve, your ballistics engine is modeling the flight of the bullet using actual measured data. This will get you accurate elevation data. Then, when you couple that with the Applied Ballistics Kestrel in the vane mount and allow it to take localized measurements of the wind, you are able to get a very representative windage hold that we have shown can get you on target on a first round shot nearly one-third of the time – and we’ve done this by just adding a few tools to the kit, without changing the weapon system at all.

We realize that not every situation allows for this kind of equipment to be carried and thus, the Applied Ballistics Kestrel can operate completely standalone and operate just as well, but these other tools also bring enhanced accuracy when using them.

Christopher Rance served as a sniper/assaulter in the U.S. Army in Baghdad, Iraq in OIF 07-09. He is a multi-time International Sniper Competition competitor.