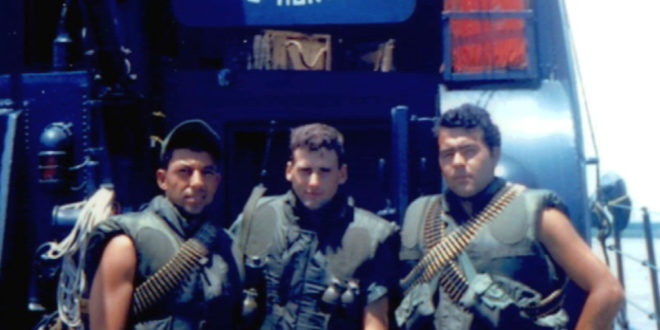 Squadron One Duty On Board the Point Banks Vietnam

Squadron One Duty On Board the Point Banks

I had the distinct pleasure of serving with one of the finest crews in Squadron One, on board the USCGC Point Banks [WPG-82327] from 9 May until 23 October in 1968. However getting there was nowhere near “half the fun.”

I was the only Coastie arriving at Ton Son Nhut airport on Sunday, 5 May, and was unable to contact Coast Guard headquarters for transportation. The Navy took me in tow and got about a mile and a half toward Saigon when we came under fire. There was no food but plenty of snipers, nearby air strikes and civilian refugees streaming down the road. On the second day I was able to beg some jungle greens and get out of my dress khakis. Day three brought an opportunity to send a note to CGHQ via a passing Army jeep convoy. As I suspected, HQ had not been told I was coming. They managed to get another Army patrol to bring me into Saigon. I must have looked like hell as they quickly got me a place to shower and sleep.

A sampan passes the watchful eyes behind the Point Banks bow mount.

Day four started with a flight toward the Cambodian border. Arriving at An Thoi, I was told I would have a few days of orientation and then be assigned to a boat. I had just finished unpacking when a messenger said to immediately report on board the Point Banks. An hour and a half to relieve the departing XO, and by midnight we were underway on my first patrol.

“Frenchy” Benoit brining out a load of sandblasting supplies.

Our skipper was Jim White, an extremely capable officer who clearly was in command but managed to maintain a solid foundation of human understanding. Some of the other crew members are legendary figures in Squadron One: Frenchy Benoit who was later wounded in action and has been a pillar of the CGCVA and Silver Star winner Larry Villarreal.

Life on board Point Banks was much the same as it was on the other boats in the Gulf of Thailand. Having little in the way of shore facilities, our “nest” was alongside a Navy barge anchored in the island’s harbor. On patrol we continually boarded sampans and junks, sometimes firing illumination to track unlighted vessels. On many evenings at Song Ong Doc. There were “highs” including the camaraderie during extended games of “Hearts” and being able to call home from Cam Rahn Bay while the Point Banks was in dry dock. Lows were listening to Armed Forces Radio report the assassination of Bobby Kennedy, just months after the same fate befell Martin Luther King, and the time a crewmember accidentally tried to shoot a .45 through the bridge deck next to my foot.

One difference was our use of the 13-foot Boston Whaler to go into rivers and canals, sometimes following sampans that headed for shallow water to evade the WPB. While there were multiple dozens of small-boat operations; we provided gunfire support for the Special Forces outpost a few are easy to recall. One nighttime foray ended with engine failure inland of a river mouth being closed off by a shore- to-shore mud bank when the tide went out. The three of us spread our flak jackets and squatted on them, two in front pulling and one pushing from behind. We could slide the 13-footer about three feet, then reset everything and do it again. After getting to enough water to float the boat, we used the seats to try to paddle out to the Point Banks. Skipper White eventually had to drive the cutter into the shallows to get us safely onboard.

“Peaceful” Saigon on 8 May 1968 with air strikes on the horizon.

shooting, with two possible KIA, we could hear a baby crying. It was tough to decide whether to “rescue” it, or leave it there in the hope that someone would come back in time to care for it.

Another excursion was much further up a river in the company of a second Whaler. We came across some kind of outpost that we destroyed, but then began hearing small arms fire. The single engine spotter aircraft that was flying cover thought they were the target and left the scene. With no observer and well inland with heavily overgrown shorelines, we tried to stay “on plane” all the way back to the coast.

“The Nest” alongside a Navy barge in An Thoi Island harbor.

The small boat actions have been well documented in the television program “The Coast Guard at War” on the Military Channel. Even though I appear six or seven times, usually at the helm of the whaler and once standing under the Point Banks insignia, I was unaware of the program until my son happened to spot it and recognized me. It was a pleasure seeing significant attention paid to all of the Coast Guard operations in Vietnam, and hear Frenchy and other shipmates recount some of our missions. I was able to purchase a copy of the show from Amazon.com to watch again if the memories begin to fade.

Frenchy at a .50 caliber gun mount.

I look back to my time on Point Banks with great admiration for the men with whom I had the pleasure to serve, and only a couple of regrets about decisions that would have been easier to make with the benefit of hindsight. Without question, however, the experiences in Squadron One provided a solid foundation for the remainder of my thirty-one year career in public service.

Previous Pfc. Jackson at the Battle of Peleliu
Next SAF: LA forcing gun stores to close for “safety” was a ruse to violate 2nd Amendment