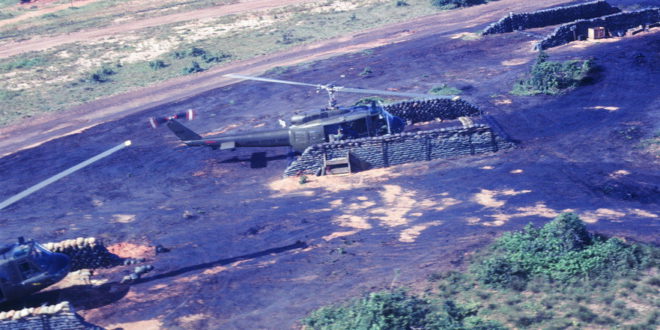 A savage assault by North Vietnamese Army regulars was stopped by the combined efforts of artillerymen and infantrymen at LZ Bird during Operation Thayer II on Dec. 27, 1966.

© 2017 Veterans of Foreign Wars of the United States

Staff Sgt. Delbert Jennings did not feel good. His stomach pains worsened, and he had trouble sleeping. Besides his illness, he was worried. His undermanned weapons platoon was assigned to defend the northern sector of the perimeter at Landing Zone (LZ) Bird. It was a large area to defend for a mere 22 soldiers, some of whom were new replacements and had seen no action.

LZ Bird was one of several forward artillery bases that provided support for the 1st Cavalry Division in the Kim Son Valley of Binh Dinh province. Many felt Bird was located in an exposed area—“a freak of geography fashioned by the vagaries of a meandering river,” according to one description. From the air, it resembled a T-bone steak. It was 820 feet in length and about 262 feet wide and was bordered on the south and west by the Kim Son River.

A dozen howitzer positions spotted the LZ. The 155mm guns of C Btry., 6th Bn., 16th Artillery, were situated at the northern perimeter, and at the southern tip were the 105mm cannons of B Btry., 2nd Bn., 19th Artillery. Interspersed among the gun positions were infantrymen from C Co., 1st Bn., 12th Cav, 1st Cav Div.

Just before Christmas 1966, both sides called a truce to hostilities. However, at 1 a.m. on Dec. 27, the unmistakable sound of incoming mortar rounds were heard. The chattering of enemy heavy machine guns and 57mm recoilless rifles cracked in the night air. Soon, soldiers from the 22nd North Vietnamese Army (NVA) Regiment—perhaps 1,000 men were in the force—had successfully breached the perimeter.

“The moon was out and between the rain clouds … and you could see hundreds of NVA, most in single file, coming at us,” wrote Spec. 4 John McGinn, Jr. “I was on the northeast side. I felt like we were sitting ducks.”

As the two NCOs rallied the troops in their sector, 1st Lt. John Piper and 1st Lt. Charles Campanella emerged from their tent to see 40 to 50 NVA soldiers breaching the southeast corner of the perimeter. Both officers began to withdraw to the gun parapets to defend them. They made it safely to the Fire Direction Center and were joined by battery commander Capt. Leonard Shlenker, Jr., 1st Lt. Michael Livengood, 1st Lt. John Reike, Staff Sgt. Carroll Crain and radio operator Spec. 4 Clint Houston.

“Some of the NVA jumped over the trench going to another gun position,” Houston recalled. “Lt. Livengood fired his M-79 grenade launcher as they jumped over. I fired at one NVA coming up the trench yelling at me. I know two of my tracer rounds hit him.”

As Shlenker’s group was leapfrogging toward No. 1 gun pit, Jennings and Johnson’s men fought for their lives. Jennings killed about a dozen NVA, then another three who were attempting to destroy one of the 155mm howitzers.

Jennings’ Medal of Honor citation reads: “Observing that some of the defenders were unaware of an enemy force to their rear, he raced through a fire-swept area to warn the men, turn their fire on the enemy, and lead them into the secondary perimeter.

“He personally led a group of volunteers well beyond friendly lines to an area where eight seriously wounded men lay. Braving enemy sniper fire and ignoring the presence of booby traps in the area, they recovered the eight men.”

Meanwhile, at the gunpit, desperate measures were necessary.

“I would look to the rear, then move up and rest my back on Livengood’s boots,” Houston said. “This ditch was only about 2½ to 3 feet deep. Then Lt. Reike got hit in the throat and the bullet traveled down to his stomach.

“We tried to stop the bleeding as best we could, but the NVA were swarming all around us. We gave him a .45 pistol and told him we would try to keep them off of him as we went for more help.”

As Reike lay dying, Spec. 4 Charles Tournage arrived on the scene. The young medic had been all over the battlefield, helping wounded soldiers. He was completely naked. When the opening shots were fired, he had no time to get dressed.

After giving first aid to Reike, Tournage raced to find additional medical supplies. In his search, he narrowly escaped death. In the darkness, a charging NVA mistook him for a fellow soldier. “As the Viet swerved off on an oblique, Tournage had time to get off one M-79 round that, armed in just the right split-second, hit the target in the middle of the back and tore the North Vietnamese apart,” military historian S.L.A. Marshall wrote in his book Bird: The Christmas2tide Battle.

Combat was intense, especially when confined to isolated pockets.

“We fired our M-60 machine gun for three to five minutes … using 800-900 rounds of ammo before we were overrun,” McGinn explained. “We played dead. It was no use in trying to fight off any more of them. They kicked me and went through my pockets and took my billfold and watch. I lay there praying, waiting to be shot in the head.”

Fortunately, communications had been restored and illumination rounds from LZ Pony bathed Bird in an eerie light, sparing McGinn’s life.

Spec. 4 William Dunbar had flown in from LZ Pony just the night before. “It is not an easy task to describe what happened since people were running all over,” he recalled, “the loud bursts of weapons, soldiers yelling to each other amidst what looked like a grand finale at a Fourth of July fireworks show.”

Artillerymen were busy doing their jobs, too. Piper and Staff Sgt. Robert Underwood loaded a beehive round into one of the 105mm howitzers. Yelling a warning to get down, Piper yanked the lanyard. Instantly, 8,500 flechettes (tiny metal-shaped arrows) tore into the attacking NVA ranks.

“It was so haunting,” Houston remembered. “It screeched like a million bees. I saw a big hole in their ranks, and then I heard screaming. Those bodies were ripped to shreds. Then they fired again with the same results. The assault was stopped dead in its tracks.”

“The sun came up, and the carnage was everywhere,” Houston said. “We loaded our dead and wounded on the arriving choppers. The NVA dead were lined up. Blood was running in the ruts all along the LZ. I remember it was so cold and wet. And I will never forget the smell.”

The battle had lasted only an hour. Of the 199 men on LZ Bird that night, 28 were KIA and 67 WIA—a 48% casualty rate. While half the KIAs were infantrymen, nearly 40% were artillerymen. The two artillery batteries lost 11 men; the 12th Cav’s C Company counted 14 dead. A few other occupational specialties were in the mix, including two men from the 11th Aviation Group.

Gunfire accounted for about 60% of those killed and multiple fragmentation wounds claimed the remainder. By late 1966, draftees were starting to dominate combat arms units, so they made up 64% of the deaths.

Besides individual awards, all the units involved were eventually presented the Presidential Unit Citation. Along with the batteries and infantry company mentioned, detachments of the 11th Pathfinders Company and 229th Aviation Battalion, as well as 1st Plt., D Trp., 1st Sqdn., 9th Cav, were included.

S.L.A. Marshall summed up the enemy failure in his book this way: “The NVA failed to deny the defenders the use of the main trench, and in the bunker-to-bunker fighting they were being out-gamed by the few men who stood in their way. The deeper the enemy advanced, the more he was becoming diffused.”

Capt. Nguyen Song Phuc, of the 22nd NVA Regiment, agreed: “It was a disastrous defeat for our side.”

READ the Interview SOF and Editor of Brutal Days of Vietnam

Previous Seven Hours Under Enemy Fire: one of the most decorated soldiers of the Vietnam War.
Next WESTMORELAND, JOHNSON AND VIETNAM