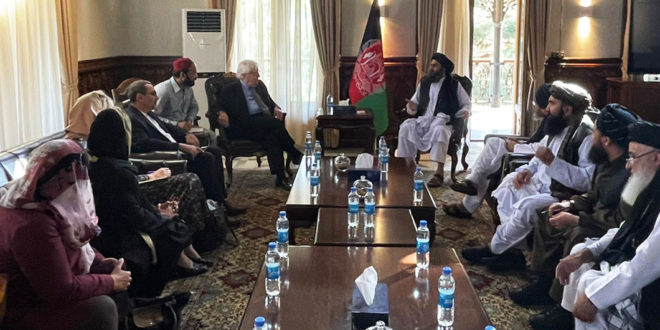 Taliban Strong Arms U.S. in to provision of robust humanitarian assistance, “directly to the people?

A U.S. interagency delegation traveled to Qatar to meet with senior Taliban representatives from Kabul and discussed issues of vital national interest. The delegation reiterated that the Taliban will be judged on its actions, not only its words, Sec of State spokesman Ned Price said in a release:

On October 9 and 10, an interagency delegation traveled to Doha, Qatar to meet with senior Taliban representatives. The U.S. delegation focused on security and terrorism concerns and safe passage for U.S. citizens, other foreign nationals and our Afghan partners, as well as on human rights, including the meaningful participation of women and girls in all aspects of Afghan society. The two sides also discussed the United States’ provision of robust humanitarian assistance, directly to the Afghan people. The discussions were candid and professional with the U.S. delegation reiterating that the Taliban will be judged on its actions, not only its words. End.

“Detailed discussions were held during the meeting about all relevant issues, and efforts will be made to improve diplomatic relations,” VOA quoted Taliban spokesman Suhail Shaheen,

The United Nations has warned that about 1 million children in Afghanistan are at risk of starvation, more than 18 million need urgent humanitarian assistance, and deepening drought and the approaching harsh winter are only going to make matters worse.

In the run-up to the meeting, officials in Washington said the high-level U.S. delegation would press the Taliban to ensure continued safe passage out of Afghanistan for American and other foreign nationals as well as Afghan allies. They also would urge the Islamist group to uphold commitments to form an inclusive government, respect the rights of Afghan women and minorities, fight terrorism and facilitate access for humanitarian aid to Afghans.

A statement by the Taliban said, “Political issues were discussed in detail during the meeting and the Islamic Emirate considered full implementation of the Doha agreement as the best way of resolving problems.”

“The humanitarian assistance should not be linked to political issues,” the Taliban further said.

When asked if the issue of releasing funds to the Afghan central bank was raised by the Taliban delegation during the meeting, spokesperson Suhail Shaheen said, “All topics of interest were discussed from their side and our side.”