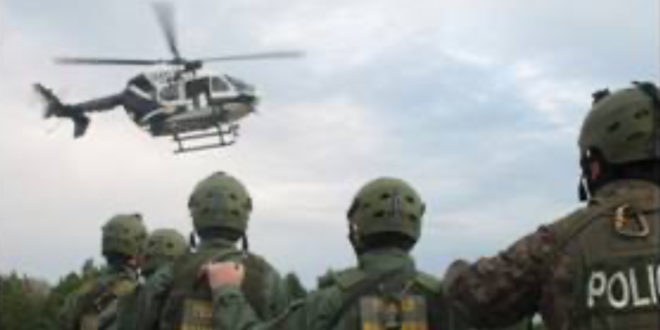 Texas Border is like a war zone: guardsmen are taking gunfire from the Mexican side of the southern border

Since the launch of Operation Lone Star on March 4th, DPS has made 598 criminal arrests and made over 16,000 referrals of illegal immigrants to the U.S. Customs and Border Protection.

Governor Abbott in a press conference detailed stories of abuse, assault, rape, and attempted murder of migrants at the hands of smugglers and cartel members. The Governor recognized DPS Trooper Curtis Woodard, who helped rescue a mother and her six-month old baby who were thrown from a raft into the river by cartel members. The Governor noted that the Biden Administration’s continued refusal to secure the border has perpetuated the sharp rise in illegal crossings and urged President Biden and Vice President Kamala Harris to take immediate action to end the humanitarian crisis.

“Operation Lone Star is delivering results to keep our communities safe, but it is also exposing the continued failures of the Biden Administration to secure the border,” said Governor Abbott.

6 March Governor Greg Abbott and the Texas Department of Public Safety (DPS) launched Operation Lone Star to combat the escalating smuggling of people and drugs into Texas. The Operation integrates DPS with the Texas National Guard and deploys air, ground, marine, and tactical border security assets to high threat areas to deny Mexican Cartels and other smugglers the ability to move drugs and people into Texas.

“The crisis at our southern border continues to escalate because of Biden Administration policies that refuse to secure the border and invite illegal immigration,” said Governor Abbott. “Texas supports legal immigration but will not be an accomplice to the open border policies that cause, rather than prevent, a humanitarian crisis in our state and endanger the lives of Texans. We will surge the resources and law enforcement personnel needed to confront this crisis.”

“TX will always step up to secure the border. Since launching Operation Lone Star, @TxDPS has made 598 criminal arrests & more than 16,000 referrals of illegal immigrants to Border Patrol. These criminal arrests include heinous crimes like rape & sexual assault,” Gov. Abbott.

As part of Operation Lone Star and under the direction of Governor Abbott, DPS continues its presence, including air, ground, marine and tactical security assets, along the border to combat the smuggling of people and drugs into Texas.

Human trafficking and child sex abuse is on the rise and has been a target of Texas law enforcement for years.
On Feb. 24 and 25, 2021, the Texas Department of Public Safety (DPS) Criminal Investigations Division (CID), in conjunction with Homeland Security Investigations (HSI), conducted an operation to target individuals seeking to sexually exploit and victimize children and adults, as well as to identify and apprehend individuals suspected to be involved in human trafficking by using various websites to solicit sexual acts from minors and adults.