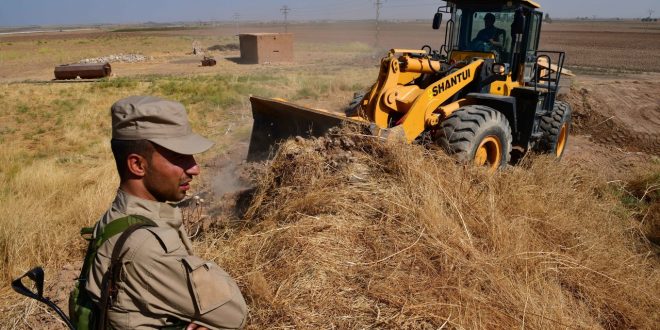 Members of the Syrian Democratic Forces remove a fortification that was identified as a concern to Turkey in support of the security mechanism zone in northeast Syria, Sept. 29, 2019. The security mechanism is intended to address Turkey’s security concerns. The U.S. and Turkish militaries are currently executing concrete steps together to ensure the border area in northeast Syria remains stable and secure. (U.S. Army photo by Sgt. 1st Class Jason Kriess)

ISIS Media Figure and Foreign Fighter Charged with Conspiring to Provide Material Support to a Terrorist Organization, Resulting in Death

As alleged in a criminal complaint unsealed today in the U.S. District Court for the Eastern District of Virginia, Mohammed Khalifa, a Saudi-born Canadian citizen, who was a leading figure in the Islamic State of Iraq and al-Sham’s (ISIS) English Media Section and served as an ISIS fighter, was charged with conspiring to provide material support to ISIS, a designated foreign terrorist organization, resulting in death. Khalifa was captured overseas by the Syrian Democratic Forces (SDF) in January 2019. He was recently transferred into the custody of the FBI, at which point he was first brought to the Eastern District of Virginia.

As alleged in the criminal complaint, Mohammed Khalifa, aka Abu Ridwan Al-Kanadi and Abu Muthanna Al-Muhajir, 38, of Canada, served in prominent roles within ISIS starting in 2013 and continuing until his capture by the SDF in January 2019 following a firefight between ISIS fighters and the SDF. In addition to allegedly serving as an ISIS fighter, Khalifa allegedly served as a lead translator in ISIS’s propaganda production and the English-speaking narrator on multiple violent ISIS recruitment videos.

“This arrest is the first step in holding the defendant accountable for his alleged terrorist activity, which included serving as an ISIS fighter and an important member of the ISIS media bureau,” said Acting Assistant Attorney General Mark J. Lesko for the Justice Department’s National Security Division. “As alleged in the complaint, the defendant and others engaged in a wide-ranging conspiracy to provide material support to ISIS, with the conspirators serving the terrorist organization in a variety of capacities. As alleged, that conspiracy resulted in the death of numerous others at the hands of ISIS members and fighters. The National Security Division and our partners are committed to holding accountable those who provide material support to foreign terrorist organizations. I want to thank all of the agents, analysts, and prosecutors who are responsible for this case.”

“As alleged, Mohammed Khalifa not only fought for ISIS on the battlefield in Syria, but he was also the voice behind the violence,” said Acting U.S. Attorney Raj Parekh for the Eastern District of Virginia. “Through his alleged leading role in translating, narrating, and advancing ISIS’s online propaganda, Khalifa promoted the terrorist group, furthered its worldwide recruitment efforts, and expanded the reach of videos that glorified the horrific murders and indiscriminate cruelty of ISIS. EDVA and our partners have a long history of prosecuting national security cases, and we are honored to serve once again in this effort to seek justice on behalf of the United States and the victims of ISIS’s brutality.”

“Let there be no doubt, the FBI will hold terrorists and those who provide material support to terrorist organizations accountable for their actions,” said Assistant Director Timothy Langan of the FBI’s Counterterrorism Division. “The unsealing of the charges today demonstrates the FBI’s tireless dedication and commitment to pursue those who join foreign terrorist organizations like ISIS. The defendant is alleged to have, among other things, played an integral role in the recruitment and radicalization of Westerners through the production, narration, and dissemination of English-language ISIS propaganda, including the Flames of War videos that depicted the brutal execution of ISIS-held prisoners and hostages. He will now face justice inside of a U.S. courtroom for his actions. We will continue to present a united front, with our U.S. government and international partners, in the fight against ISIS, those who support ISIS, and other terrorist groups.”

“As alleged in the complaint, as one of the leading figures in ISIS’ English media section, Mohammed Khalifa contributed to the radicalization of individuals through his English narration of ISIS recruitment propaganda,” said Assistant Director in Charge Steven M. D’Antuono of the FBI’s Washington Field Office. “While many Americans are aware of the brutal and violent crimes committed by many ISIS actors, ISIS’ efforts to radicalize individuals to travel to Syria and commit violence on its behalf were equally horrendous. The charges announced today, which are the result of years of diligent work by the FBI’s Washington Field Office and our partners, are a reminder to those who continue to support ISIS around the world that the U.S. Government has not forgotten your crimes. We will find you and hold you accountable.”

The complaint also alleges that Khalifa traveled to Syria in the spring of 2013 with the intent of becoming a foreign fighter and ultimately joining ISIS. He joined ISIS in or around November 2013 and swore allegiance to then-ISIS leader Abu Bakr al-Baghdadi. In early 2014, he was recruited to join ISIS’s Media Bureau due in part to his linguistic capabilities as a fluent English and Arabic speaker. Khalifa played an important role in the production and dissemination of ISIS propaganda across multiple media platforms targeting Western audiences. A primary focus of much of Khalifa’s propaganda production was aimed at enticing ISIS supporters to travel to ISIS-controlled areas to join ISIS or to conduct attacks in the West, including in the United States, on ISIS’s behalf. Khalifa actively participated in armed hostilities on behalf of ISIS. Just prior to his capture by the SDF on or about Jan. 13, 2019, Khalifa engaged in armed conflict on behalf of ISIS, including throwing grenades against opposing combatants.

The complaint further alleges that Khalifa was a prominent figure within the ISIS Media Bureau, the “Diwan of Central Media,” and assisted in the translation and narration of approximately 15 total videos created and distributed by ISIS. The productions narrated by Khalifa include two of the most influential and exceedingly violent ISIS propaganda videos: “Flames of War: Fighting Has Just Begun,” distributed on Sept. 19, 2014, and “Flames of War II: Until the Final Hour,” distributed on Nov. 29, 2017. These videos, containing English narration by Khalifa, were part of an ISIS media campaign promoting violence committed against U.S. citizens and other countries’ citizens in order to incite further violence against the United States, allied nations and their citizens. The videos depict glamorized portrayals of ISIS and its fighters as well as scenes of violence, including depictions of unarmed prisoners being executed, depictions of ISIS attacks in the United States, and footage of ISIS attacks and fighting in what is described as Syria and Egypt.

Khalifa also allegedly narrated a series of recruitment videos entitled “Inside the Khilafah” that depicted various aspects of daily life within the Islamic State and featured ISIS members encouraging potential recruits to join ISIS and conduct terrorist attacks against non-Muslims. The narration in one of these videos encourages recruits unable to leave their home countries to join ISIS in conducting attacks in countries outside the Islamic State, displaying footage of ISIS attacks in Europe, including attacks in Paris, France; Brussels, Belgium; and Nice, France. The video also includes a voice recording of Omar Mateen, the Pulse Nightclub mass shooter, declaring his allegiance to ISIS during the June 12, 2016, terrorist attack in Orlando, Florida.

Productions by the ISIS Media Bureau during the time period in which Khalifa was allegedly a prominent member include videos or images depicting: the beheadings of American hostages James Wright Foley, Steven Joel Sotloff and Peter Edward Kassig; an announcement concerning the death of American hostage Kayla Jean Mueller; the beheadings of British citizens David Haines and Alan Henning; the decapitated body of Japanese citizen Haruna Yukawa; and the beheading of Japanese citizen Kenji Goto.

Khalifa is charged with conspiring to provide material support or resources to a foreign terrorist organization, resulting in death. If convicted, he faces a maximum penalty of life in prison. A federal district court judge will determine any sentence after taking into account the U.S. Sentencing Guidelines and other statutory factors.

Three Sailors died during an active shooter incident at Naval Air Station Pensacola, Dec. 6. 2019. Their families and families of the injured have filed a lawsuit claiming that Saudi and Saudi students and trainees at the base knew of the planning and did not act to prevent the murders.

“Al-Shamrani was a Trojan Horse sent by his country, the Kingdom of Saudi Arabia, and its proxy, al Qaeda in the Arabian Peninsula, for flight training at Naval Air Station Pensacola, Florida, under the auspices of a program tied to billions of dollars in military arms sales from the United States to the Kingdom,” the lawsuit states according to AP.. “Little did the American people know that such an arrangement would soon devolve into a horrific, Faustian bargain.”

The identities of the Sailors are:

A year later, NCIS, FBI concluded that “the evidence we’ve been able to develop from the killer’s devices shows that the Pensacola attack was actually the brutal culmination of years of planning and preparation, by a longtime AQAP associate.

The plaintiffs have evidence discovered from the Navy and FBI to back them up: “The new evidence shows that al-Shamrani had radicalized not after training here in the U.S. but at least as far back as 2015, and that he had been connecting and associating with a number of dangerous AQAP operatives ever since. It shows that al-Shamrani described a desire to learn about flying years ago, around the same time he talked about attending the Saudi Air Force Academy in order to carry out what he called a “special operation.” And he then pressed his plans forward, joining the Air Force and bringing his plot here—to America.

“In line with FBI findings released in May, the Pensacola investigation concluded that the self-radicalization of 2nd Lt Al-Shamrani was the primary cause of the fatal terrorist attack, and that the heroic actions by the victims on scene and responding forces limited what was already a catastrophic event.

“The Navy convened the Command Investigation to specifically examine the facts and circumstances surrounding the fatal shooting, including resulting injuries, death, property damage, security, personnel, and other factors related to the incident. In order to ensure the safety and well-being of uniformed and civilian personnel, the investigating officer was also directed to include an assessment of whether all laws, regulations, programs, policies, and procedures related to Force Protection (FP), emergency response management, insider threat and active shooter training, personal firearms, and vetting of International Military Students were followed.

“The investigation examined the adequacy of Force Protection in light of the threat known at the time of the shootings, if the emergency response management was properly executed and if there were any possible deficiencies with FP doctrine, organization, training, materiel, leadership and education, personnel, facilities (DOTMLPF). Investigators also assessed other individual risk factors as well as the appropriateness of Department of the Navy (DON) post-incident response, including medical response, support to victims, survivors, and their families.

The legal effort to bring justice may be a long haul met with political roadblocks as has been the lawsuit against the Kingdom by the families of the victims of 9-11.

More in features below video.

Previous Texas Border is like a war zone: guardsmen are taking gunfire from the Mexican side of the southern border
Next PLA aircraft enter Taiwan Air Space repeatedly